Hitless games have been few and far between for Vandalia’s Brett Mueller this season.

And after going hitless for back-to-back games for the first time in Sr. Legion action this summer, he bounced back with a hit in the semifinals of the 29th annual Mattoon Firecracker Classic.

That single, however, was one of just four for Post 95 last Saturday, as Vandalia lost back-to-back games for the first time this season after being shut down, 4-0, by eventual tournament champion Mattoon.

Mueller has hit in 15 of 21 games, but failed to record a hit in the last two games of pool play.

Quinn Wadkins had two hits for Vandalia, breaking himself out of a 2-for-16 slump that had lasted five games, and Ryan Miller also singled for Post 95 (18-7).

Mattoon (17-1) got two runs in each of the sixth and seventh innings against Vandalia, with Ryan Hutchinson and Tanner Scott each driving home a pair of runs.

Post 88 beat Teutopolis, 2-0, in the championship game. T-Town defeated Danville, 3-2, in nine innings in the semifinals.

Vandalia’s Matt Tomazzoli took his first loss of the season, but threw his team-leading third complete game, Vandalia’s 10th of the summer.

Tomazzoli (2-1) struck out two, but is still averaging 5.88 strikeouts per seven innings. He holds a team-low 1.08 earned-run average, and allows 0.92 walks and hits per inning.

Mattoon’s runs in the sixth broke a streak of 23 innings in which Tommazoli had not allowed an earned run.

Mattoon’s Carter Price earned the win, striking out six over the final four innings. AJ Diepholz – who tossed a no-hitter during the tournament – threw the first three frames.

Vandalia earned a spot in the semifinals after Louisville defeated Effingham in the final game of Pool C. Had Effingham won that game, it would have held the tie-breaker over Vandalia, and been crowned the Pool C champion.

MATTOON – A pair of players kept up impressive streaks in the final game of pool play at the Mattoon Firecracker Classic, but there wasn’t much excitement otherwise, as Post 95 struggled in a loss to Danville.

Vandalia did not manufacture much on offense and displayed little energy during last Friday’s 8-1 loss to Danville.

Noah Powless ripped his team-leading 12th double in the fourth inning to drive home Vandalia’s lone run. He extended his hitting streak to six games, and has at least one RBI in each of his last 10 starts.

Scoring on the play was Austin Schwarm, who has crossed the plate in nine straight games.

Post 95’s only other offensive contributions were a leadoff single by Schwarm and walks by Brett Mueller and Nate Ketchem.

Danville’s Dillon Turner fired a complete game, mixing his pitches well to strike out eight in an efficient outing.

He needed just six pitches to get through the second inning, and all but three of Vandalia’s at-bats lasted five pitches or less.

“We got a little shaken up in the front end of the game,” Rod Mueller said. “We were totally flat.”

Danville (11-6) added four runs on four hits and two errors in the second inning and two runs on a hit, three walks and two hit batsmen in the third to chase starter Dylen Peters (2-2) from the game.

The loss marked just the third time in 24 games that Vandalia (18-6) had scored one run or fewer, and the first two times saw Post 95 come back for a victory in the next game.

“It seems like every time we have one of these, we bounce back harder,” Mueller said. “After our little discussion, hopefully we can pick it up.”

Kyle Brazas had two hits, including a two-run single in the second, to lead the Post 210 Speakers offense, and Aiden Berg collected two hits and an RBI.

Post 95 picked up an important victory in the final pool play game of the Mattoon Firecracker Classic last Thursday, topping Louisville, 8-1, to finish at 2-1 in Pool C.

Jacob Behrends recorded a season-high nine strikeouts in notching his team-best third complete game to remain undefeated in front of an errorless defense. He is 5-0 in seven appearances, and has fired complete games in three of his four starts.

Behrends is averaging better than a strikeout per inning, and his fielding-independent earned-run average of 1.89 leads the team.

He danced out of trouble throughout the game, stranding two runners on third base. A leadoff triple in the sixth inning led to a run, but Behrends limited the damage by ending the game with three straight infield pop ups following the two hits.

Austin Schwarm hit his first triple of the season as part of a 3-for-4 effort that led the offense. He has recorded at least three hits in a game five times this summer.

Noah Powless had a pair of RBI doubles, and others driving in runs were Schwarm, Kyle Bray, Quinn Wadkins, Brock Trexler and Nate Ketchem.

Vandalia (18-5) scored in the top of the first inning, and broke open the game in the fourth with four runs. Three extra-base hits contributed to the rally, with Powless and Ketchem hitting RBI doubles and Schwarm hitting an RBI triple.

Post 95 added three more runs in the sixth, loading the bases on two walks and a single before a sacrifice fly by Wadkins and a double by Trexler.

Vandalia and Effingham have become familiar foes this summer, and in the fifth matchup of the summer last Thursday, Effingham broke Vandalia’s second six-game winning streak with a 7-3 victory in pool play of the Mattoon Firecracker Classic.

Post 95 is now 3-2 against Effingham, and the teams could meet again in the District Tournament later in July.
Effingham sprinkled runs throughout the game, scoring once in the top of the first, twice in the third, twice in the fifth and twice in the seventh.

Vandalia’s Noah Powless had a two-run double as part of a three-run fifth for Post 95. Kyle Bray also had an RBI single.

Vandalia (17-5) stranded five runners in scoring position during the game.

Clinton Hood (2-1) allowed five earned runs on 10 hits and three walks in 6 1/3 innings of work. The defense made back-to-back errors in the fifth that led to two runs.

Johnnie Clift added a double for Vandalia, and Ryan Miller had two singles for his first multi-hit game since doing so in four of five games in early June. He had been 2-for-19 since that stretch.

Tomazzoli (2-0) needed fewer than 10 pitches to get out five of the seven innings, striking out six along the way.

Twice, he got through an inning with five pitches.

He retired the first 10 batters, and was one single and two errors away from a perfect game.

Tomazzoli has yet to allow an earned run through his first 18 innings pitched.

Noah Powless hit an RBI single in the bottom of the first inning to bring home Austin Schwarm, and Vandalia (17-4) then added three runs in the fifth.

Wadkins’ one-out single scored Powless and Brett Mueller, who both singled and had two hits in the game. 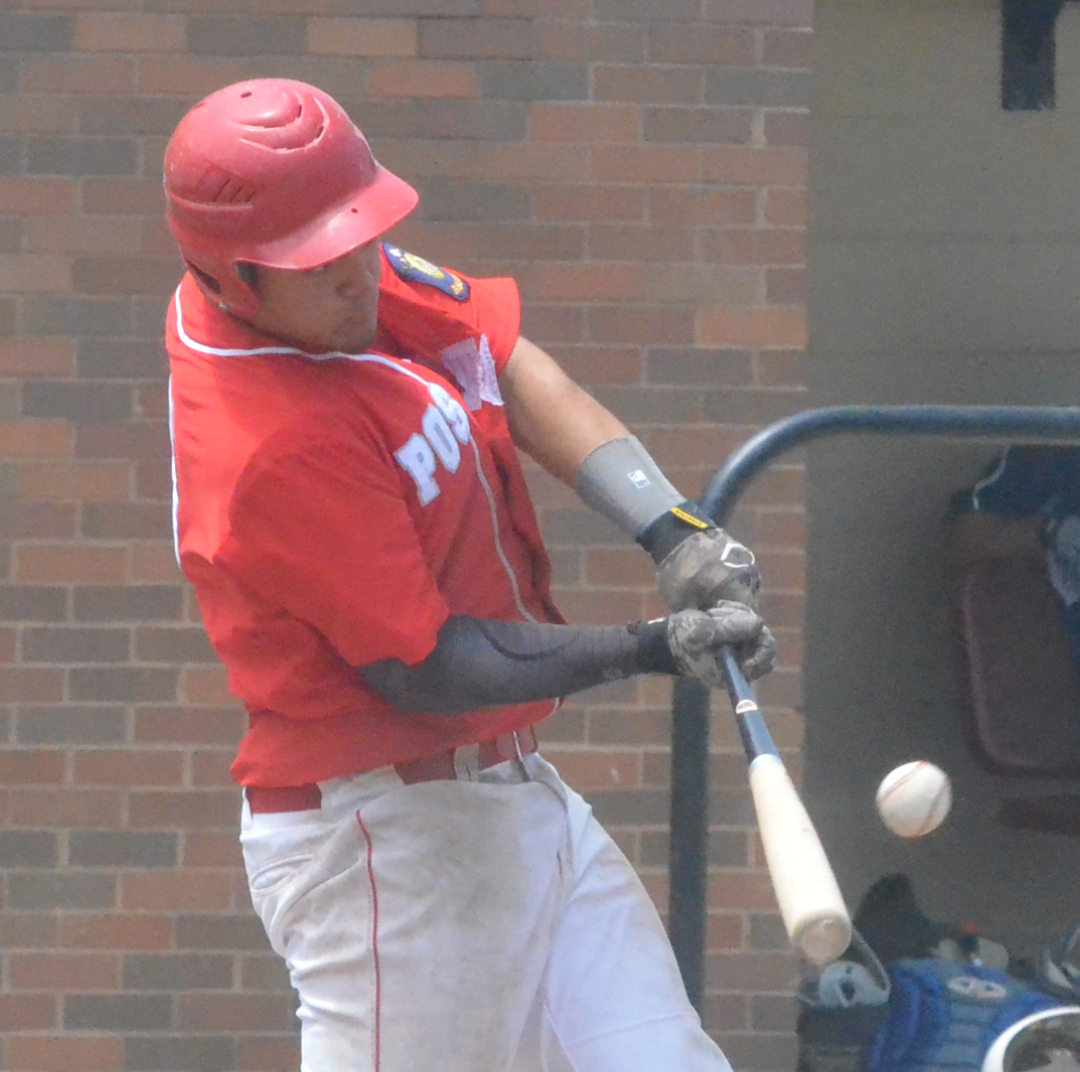 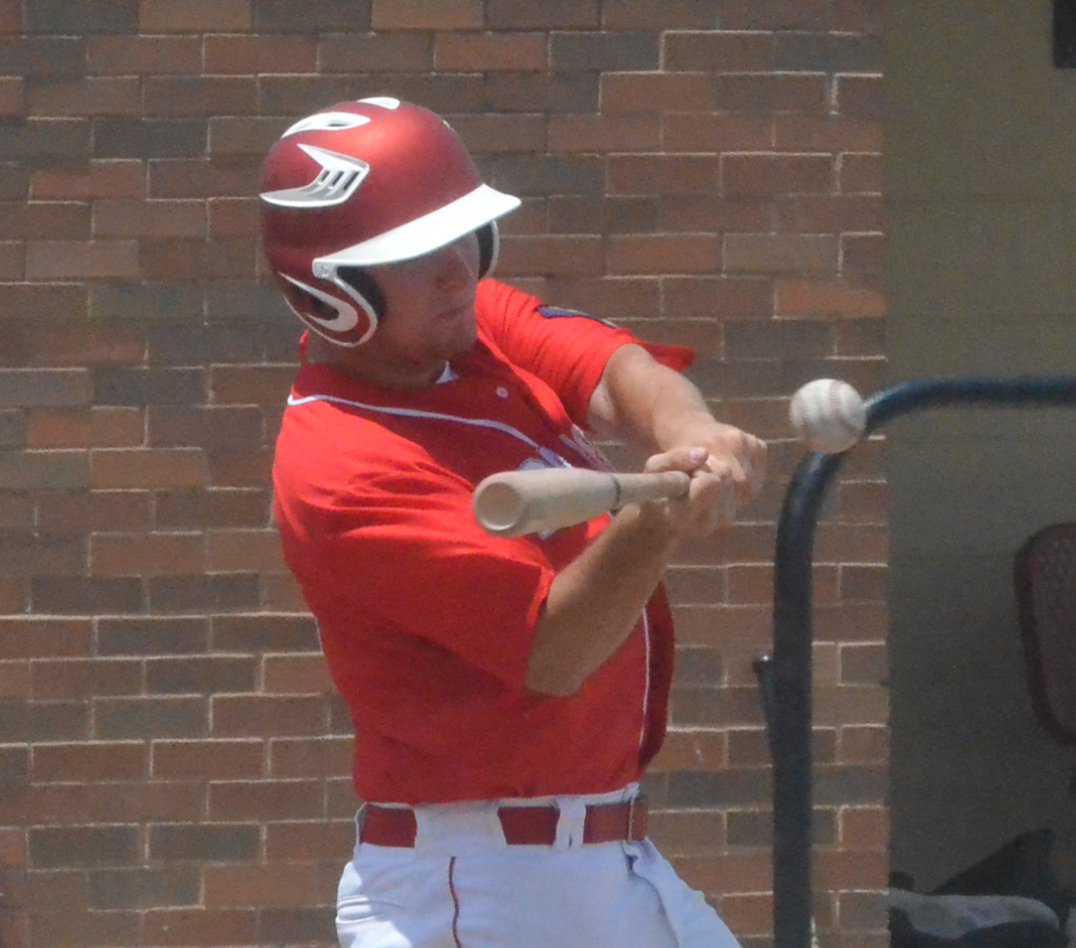 Vandalia’s Brett Mueller swings at a pitch toward the top of the strikeout during last Friday’s game at Mattoon.