Three days after a leak at the Patoka Tank Farm, Marathon Pipeline operations are “pretty much back to normal,” according to a company spokesperson.

That leak, estimated to be about 1,000 barrels of crude oil, caused the closure of U.S. Route 51 between Patoka and Vernon on Sunday.
Angela Graves of Marathon Pipeline said on Wednesday morning that the leak had been pinpointed to a pipeline, and that workers were performing maintenance work in the area of the leak.
The company was also “finishing cleanup work,” Graves said, adding that the cause of the leak cannot be confirmed until an investigation that will include some testing.
That investigation, she said, “will take some time to complete.”
Those participating in the investigation include the Environmental Protection Agency and U.S. Department of Transportation Pipeline & Hazardous Materials Safety Administration.
Graves said on Monday that an employee discovered the leak on Sunday morning, with crude oil spreading to a ditch between the facility and U.S. Route 51.
She said that once the leak was discovered, Marathon contacted emergency responders and began working to address the leakage.
Route 51 was closed, she said, because the chemical odor emanating from the crude oil could make people sick. While the highway was closed, none of the people living near the tank farm were evacuated.
While the amount of crude oil leaked has been estimated at 1,000 barrels, Graves emphasized that that is “a rough estimate.” 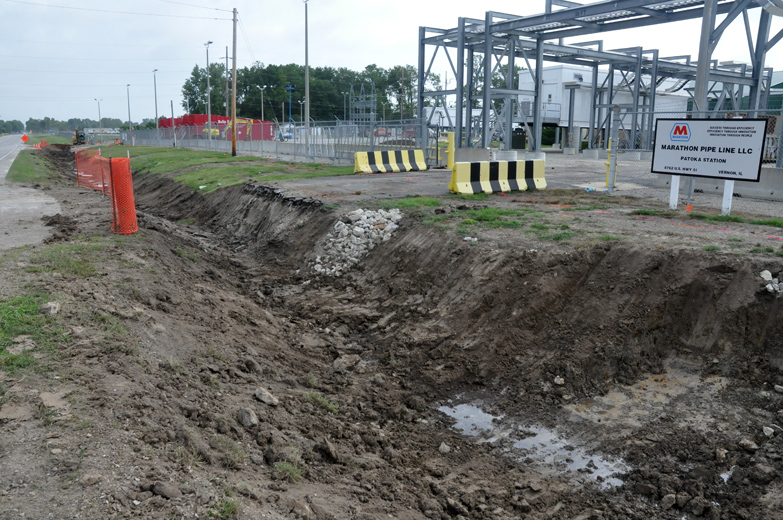