VANDALIA – For the third time this summer, Vandalia made the quarterfinals of the tournament in a Vandal Shootout.

A late comeback try against Olney came five points short on Tuesday afternoon, as the Tigers squeaked out a 31-26 victory.

Olney had an 11-point lead with 4:34 left in the game, but Vandalia used a 7-0 run over the next three minutes to set up a frantic final minute after rising freshman Nathan Casey’s 3-pointer rattled in to make it a 25-21 game.

The Tigers, however, would make all six of their free throw attempts in the final 1:01 to seal the win.

Rising senior Collin Nestleroad had 11 points to lead the Vandals – who finished the shootout at 3-5 for the second time this summer – and Casey scored eight. Rising sophomore Richie Well added four, and rising senior Austin Durbin made three free throws.

VANDALIA – Fayette County rivals played to a close score in the first round of the tournament of Tuesday’s Vandal Shootout.

Vandalia led St. Elmo/Brownstown wire to wire, but not by much, in a 24-20 victory.

Rising freshman Marcus Zimmerman made a layup with 2:41 left to play to give the Vandals a 20-12 lead, but SEB would make a pair of 3-pointers after that as part of its comeback attempt.

Rising junior Kyle Hardimon had 10 points for SEB to lead the game.

Collin Nestleroad, a rising senior, had a team-high eight points for the Vandals, while rising sophomore Kelly Jones scored six.

VANDALIA – The Vandals closed pool play on Tuesday with their second win of the third Vandal Shootout.

Rising sophomore Richie Well made a pair of free throws as time expired in the first half to take the lead from Benton, and the Vandals wouldn’t relinquish it in the second half of a 39-28 victory.

The game was tight for the first 14 minutes of the second half, but Vandalia used an 11-3 run over the last six minutes to widen the margin.

VANDALIA – The Vandals used a 6-0 run to close the first half of Tuesday morning’s matchup with Paris, but allowed a second-half comeback for the second straight game to give Paris a 41-40 victory.

Rising sophomore Richie Well scored half of the points in the half-ending run that gave Vandalia a 21-14 lead, and that lead held steady for the first seven minutes of the second half.

From there, however, Paris used a 13-4 run to take a three-point lead and set up a furious six-minute battle to the finish.

The lead would change twice, and the game would be tied three times before Paris made a deciding free throw with 29.9 seconds left.

Rising senior Collin Nestleroad paced the Vandals with 17 points, and Well had 10.

VANDALIA – After building a 13-point halftime lead, the Vandals allowed a 19-0 run to Mascoutah in the second half of Monday’s 54-47 loss to close day one of the third Vandal Shootout.

Rising sophomore Kelly Jones made a layup with 14:32 left in the game to give Vandalia a 42-30 lead, but that would begin a scoring drought for the Vandals that lasted until rising sophomore Richie Well hit a 3-pointer with 2:51 left to play.

Mascoutah made five free throws down the stretch to maintain its advantage, which was 10 points at its highest.

The Vandals opened the game on an 11-2 run, and they held fairly steady throughout the first half, wavering between five and 14 points for the first 20 minutes.

Well had eight points, and Austin Durbin, a rising senior, had seven points.

VANDALIA – Rising seniors Collin Nestleroad and Austin Durbin had strong games offensively, but the Vandals were unable to keep up with the speed of St. Joseph-Ogden in a 53-30 loss in the third game of the third Vandal Shootout.

St. Joe-Ogden scored on more than a dozen fast breaks, and forced the Vandals into numerous turnovers.

The Spartans opened the game on an 8-0 run. Durbin ended it with a second-chance layup with 17:19 left in the first half.

Durbin also made the next shot, but the Vandals struggled with turnovers, allowing St. Joe a 7-0 run that left the Spartans ahead, 15-4. After trading some baskets with Vandalia, they would finish the half on an 11-5 run.

St. Joe Ogden maintained its lead throughout the second half, with Vandalia never able to get within 15 points of the lead.

Nestleroad had 13 points, and Durbin scored 10.

VANDALIA – Dwight used a big scoring run in each half to blow out the Vandals in a 49-21 win in the second game of the third Vandal Shootout.

Playing at Vandalia Elementary School, Dwight –the eventual champs – went on a 17-0 scoring run in the first half, while holding the Vandals to one field goal over the first 16 minutes, and then had an 18-0 run that spanned from the last 1:30 of the first half until there were almost eight minutes elapsed in the second half.

Vandalia also earned two points after Dwight committed seven fouls in the first half. For every foul after that, the Vandals got a point. Rising sophomore Richie Well added a free throw.

VANDALIA – Rising sophomore Richie Well made a driving layup on Vandalia’s second possession of a sudden-death overtime period to propel the Vandals to a 49-47 win against Goreville in the opening game of the third Vandal Shootout.

The Vandals committed a turnover on the first possession, but rising sophomore Kelly Jones grabbed a defensive rebound at the other end and set up a fast-break play for Well’s layup.

Goreville made a pair of 3-pointers in the final 31 seconds and sank two free throws with 1.7 seconds left on the clock to force the extra period.

Vandalia led by as many as 13 points in the first half, and took a seven-point advantage into halftime.

Rising senior Collin Nestleroad later made three straight layups to spark a 12-0 run for the Vandals, giving them a 42-35 advantage. Goreville outscored Vandalia 12-5 over the final 1:16.

A surprising foul by a Goreville player put Jones at the line for a pair of free throws with 10.9 seconds left and the score tied at 45.

He converted both shots, but a Goreville player was fouled on his layup attempt at the other end. 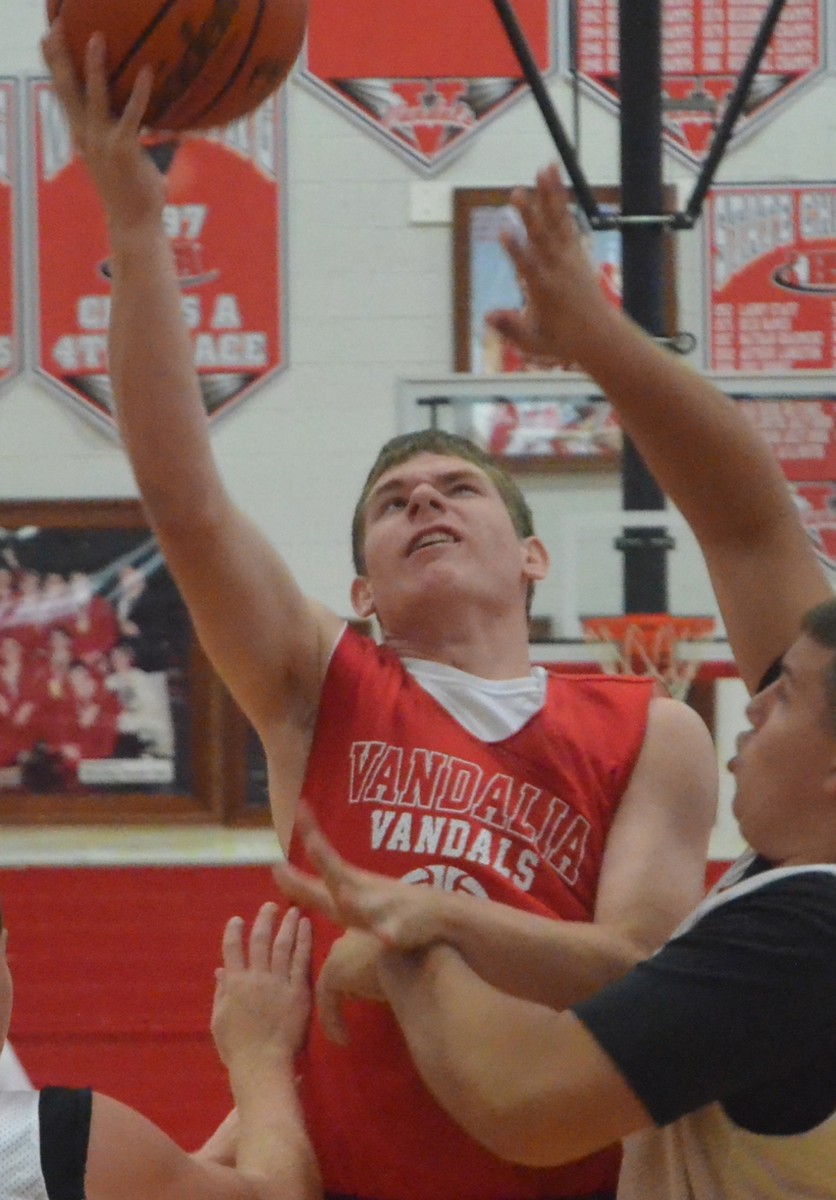 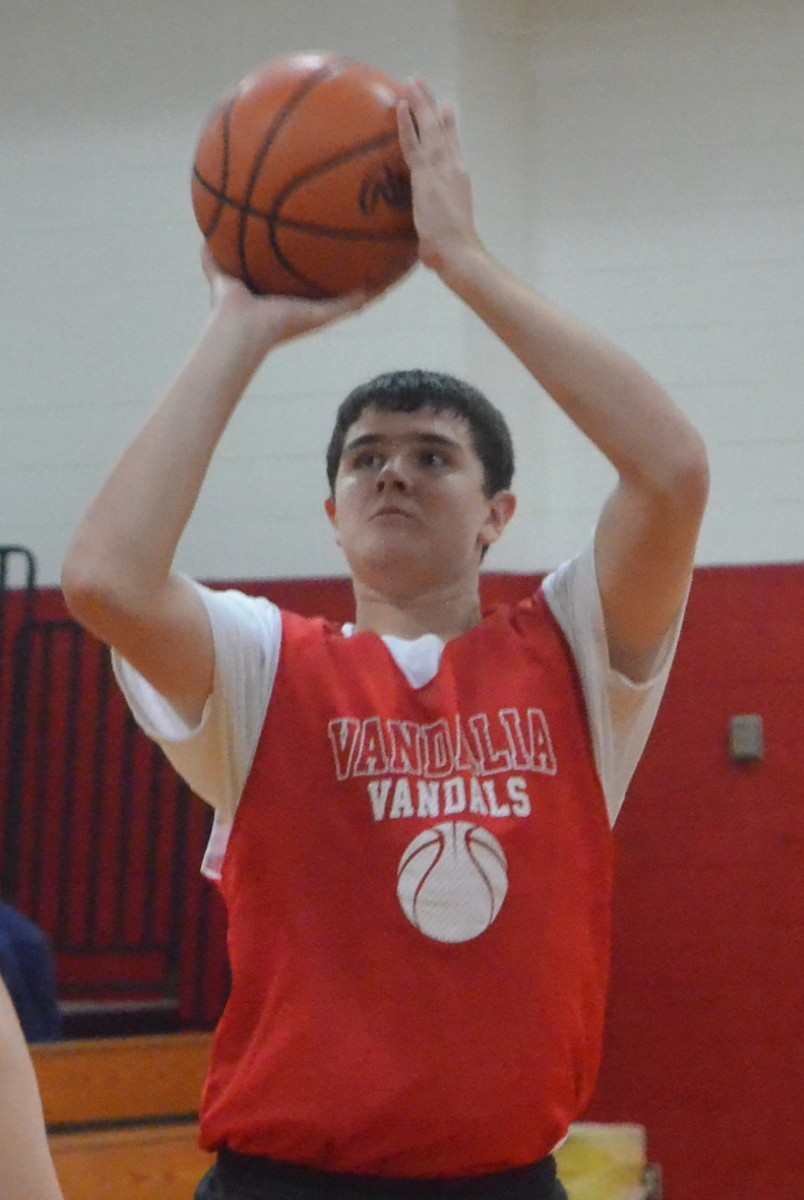 Rising freshman Nathan Casey shoots a 3-pointer for Vandalia during a game on Monday at the Vandal Shootout.