Strong community participation made the latest efforts of the Vandalia Swimming Pool staff to raise funds for necessary pool renovations a success.

Pool Manager Lisa Robbins said on Tuesday that Friday’s fundraiser held during the pool’s first Moonlight Madness of the summer was well received by both regular pool visitors and community residents only wanting to support the pool project.
Robbins said that 287 people paid admission for swimming and fundraising games and activities, including a dunk tank, big slide, mechanical surfboard, and bean bag and ring tosses.
That total does not include those who stayed outside the pool and participated in the separate activities.
Robbins said that the fundraiser generated $2,046 for the pool project.
“I was hoping to raise $2,000, so I am very pleased (with the event),” she said.
In addition to the fees for swimming and games, the total raised included $155 generated through the sale of Save Our Pool T-shirts and paper footprints displayed in the pool that designate contributors to the project.
Robbins also noted that support for the project was shown through donations, including a $500 gift from Dr. Richard and Sally Miller, $200 from Full Moon Bar and Grill owner Fred Tessman and $350 from Dave King of Cages, with King’s donation used to help pay for inflatables at the fundraiser.
Friday’s fundraiser total brings the amount raised by the pool staff in less than a year to $17,921.09, Robbins said.
“I am so proud of what we have done,” she said.
Robbins is also thrilled with children’s response to Friday’s event.
“We’ve had so many kids come up and say, ‘That was the best party ever,’” she said. “So, I’m glad that the kids really enjoyed it, as well as bringing in money for the pool.”
The Friday night revenue, in addition to the other money raised by the pool staff, go into the Vandalia Park District’s fund for renovations to the pool, which are estimated at $1.3 million.
The various ways that the pool staff is working to contribute to that fund will be noted in the district’s application for a state grant to help pay for the renovations.
“That (community support and efforts to raise money) an important part of the grant application, and I hope that they (state officials) will take all of this into consideration,” Robbins said.
She emphasized that she and her staff will continue to raise money in any way possible.
Robbins said her staff is planning to again work for tips at Sonic one evening and to again hold a booth at Vandalia’s Harvest Festival the first weekend of October. It’s also hoping to again have a haunted house at the former Washington School this Halloween.
“Every opportunity that we see to raise money to help our pool we plan to jump on it,” Robbins said. 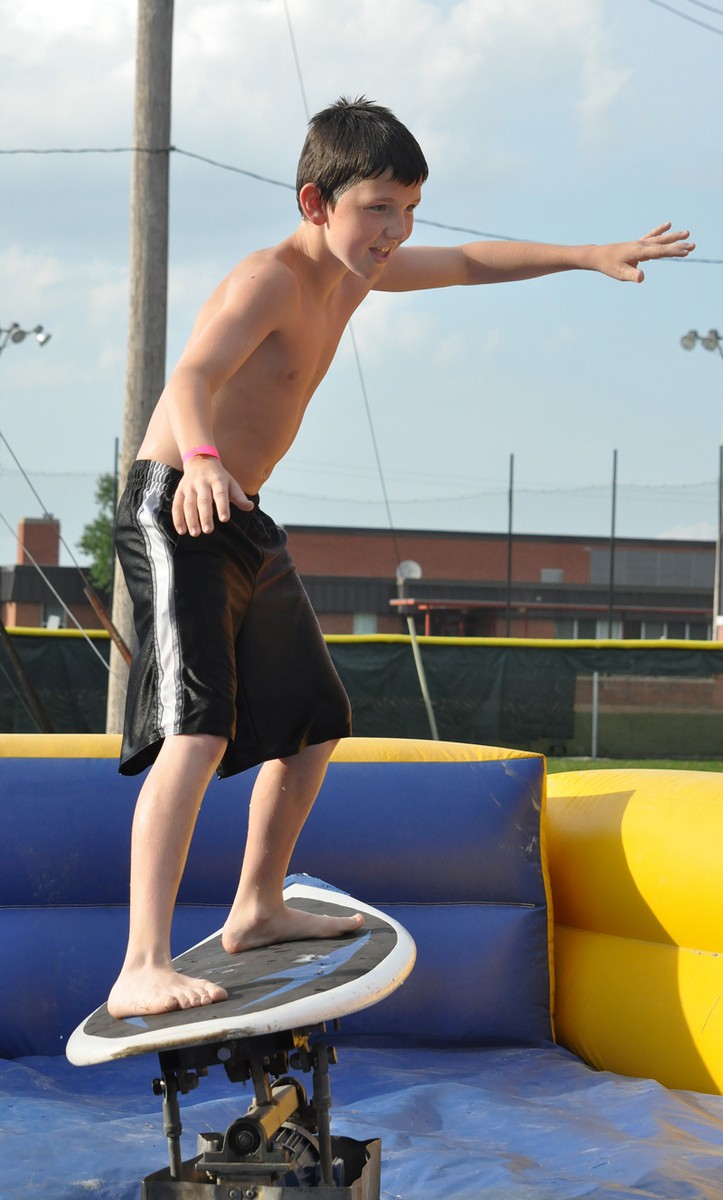 Donald Roberts tries out the mechanical surfboard during the fundraiser at the Vandalia Swimming Pool on Friday evening. The event raised more than $2,000. 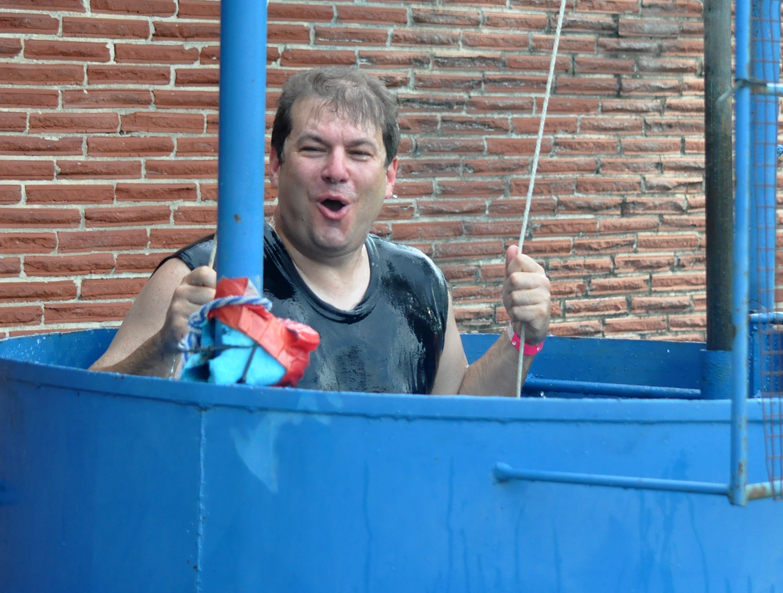 Fayette County State’s Attorney Joshua Morrison reacts to the cold water after being dropped in the dunk tank for the first time on Friday night. 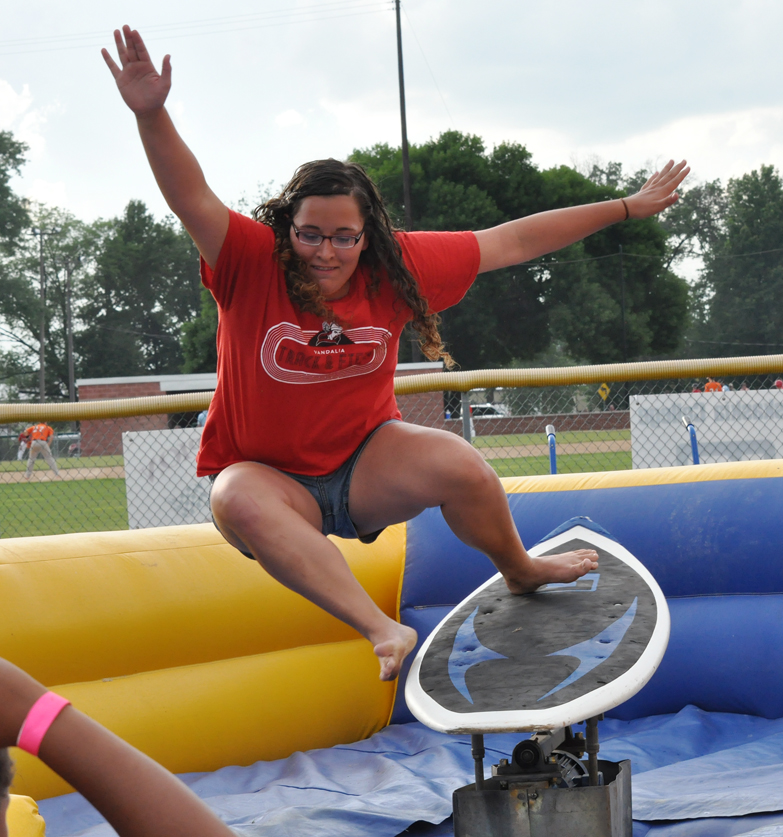 Connie Hans’ attempt at the mechnical surfboard comes to an end. 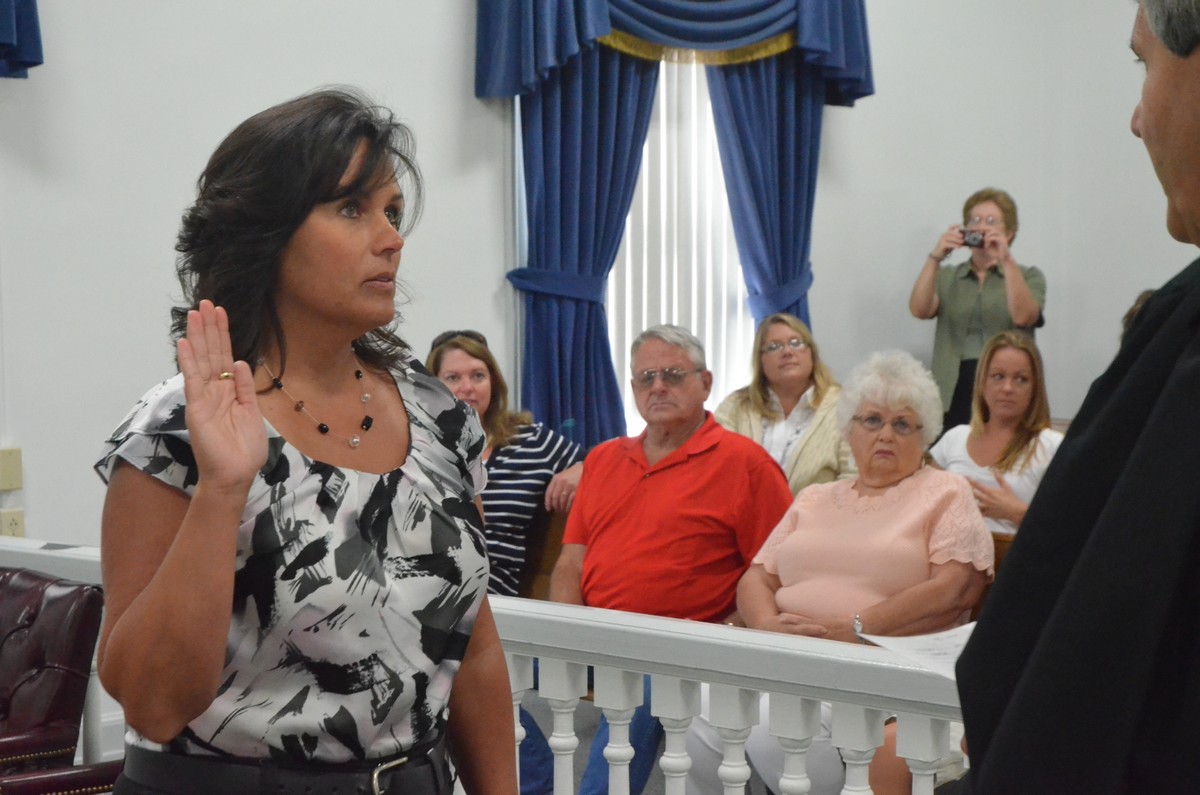 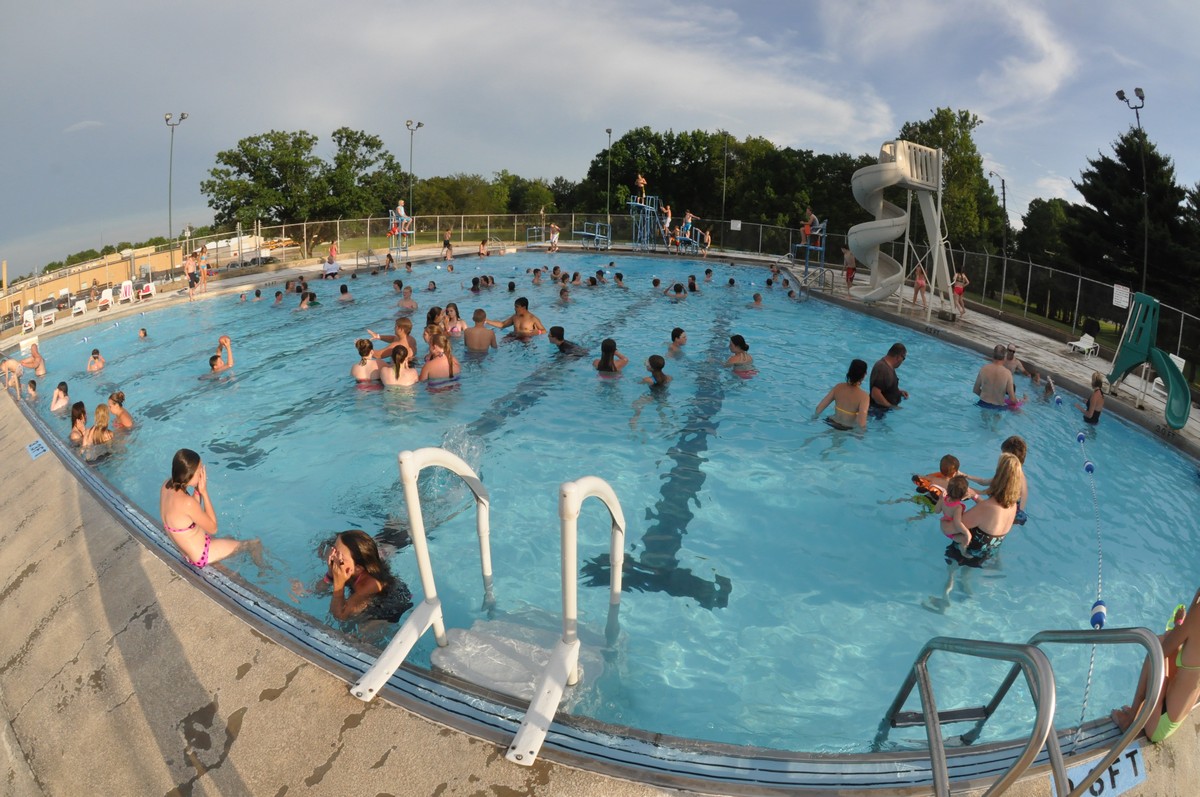