VANDALIA – Though their overall record was worse, the Vandals still made the quarterfinals of the tournament in the second Vandal Shootout of the summer.

Vandalia went 1-1 in tournament play last Friday for the second straight shootout, but went 2-6 overall, a drop from the 3-5 mark in the summer-opening event.

In the tournament’s opening round, the Vandals knocked off Wayne City, 29-23.

Vandalia never trailed as rising senior Collin Nestleroad scored 12 points, including a pair of easy layups, during Vandalia’s 7-0 run that opened the game.

Rising freshman Nathan Casey hit a 3-pointer to open the game, and he scored eight, while rising sophomore Richie Well added six and rising senior Austin Durbin made a pair of free throws.

The Vandals played from behind for most of the quarterfinal matchup, a game that featured seven ties.

The last came at 19-19, and Arcola made one free throw on two straight trips to the free-throw in the last 1:26 while holding the Vandals scoreless.

There were eight lead changes in the game, with Vandalia last holding the advantage afterWell made a pair of free throws with 3:11 left in the game to put the Vandals up 19-18.

Casey led the team with eight points, and Nestleroad added six. Well had two, as did rising sophomore Kain DuFaux, and Durbin had one.

Prior to tournament play, the Vandals dropped their final game of pool play to Murphysboro, 62-48.

VANDALIA – Flora hit 3-pointers on its first four possessions of last Friday’s game against Vandalia to establish a lead that the Wolves would never come close to relinquishing.

The Wolves knocked down 10 shots from long-range in the 68-35 win in both teams’ first game of pool play on the second day of the second Vandal Shootout of the summer.

Rising sophomore Richie Well stopped Flora’s game-opening run with the first of his three 3-pointers with 17:11 left in the first half. He and rising freshman Nathan Casey paced the Vandals with nine points.

VANDALIA – Rising sophomore Richie Well made a barrage of 3-pointers, but West Frankfort made a big scoring run in each half to sneak by the Vandals in the final game for both teams on Monday.

Well knocked down back-to-back 3-pointers late in the first half to give Vandalia a 30-29 lead at halftime.

A pair of 3s by Well, a layup by rising sophomore Kain DuFaux and a turnaround jumper by rising freshman Nathan Casey pushed Vandalia’s lead to 12 in the middle of the half.

Well got the Vandals back within a point with a 3-pointer with 3:01 left, but a layup by West Frankfort with 2:11 left on the clock would end the scoring. 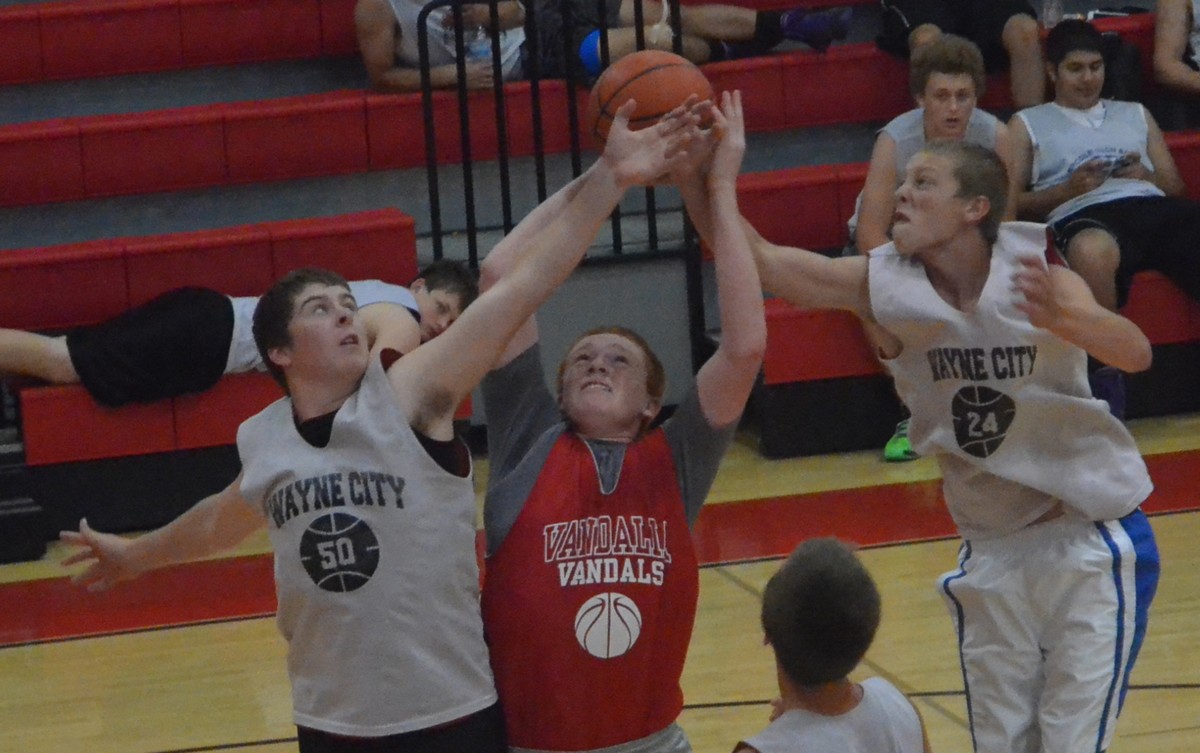