Separately, Rick and Maranatha Cripe have established and grown successful businesses. A couple of years ago, Rick brought up the idea of the two going together on a project.

“He said, ‘Wouldn’t it be awesome to own our own theater?’” Maranatha said.
That thought became a reality after the Cripes thought about their weekend experiences together as a family.
And last Friday, that idea became a reality when Rick and Maranatha opened their Starmax Cinemas.
The 14,000-square-foot building that includes four cinemas and a game room is adjacent to the Walmart Supercenter and Vandalia Commons in the southwest quadrant of Vandalia’s western Interstate 70 interchange.
“We’re just like every other family,” Maranatha said. “We enjoy doing things together. Everybody loves going to the theater, and that’s one thing we’ve done with our children.”
Rick operates Precise Construction in Vandalia, has another construction company in Florida and also farms. Maranatha started and is now a partner in Maranatha’s Salon in Spa.
“Every time we would go to a show on the weekend, we just loved the experience so much that the idea (of our own theater) just settled in,” Maranatha said.
“We put our pens to paper to see if this is something that we could do,” she said.
Rick said, “With teenage kids, one of our favorite pastimes is to go to a theater, to get to spend time with each other. It’s about the only time that you can really turn off your cells phones and get away from everything.
“Vandalia had a theater and I missed it. I loved going to the movies,” he said.
As for the decision to have his own theater, Rick said, “You always delve into what your interest is, what you like.”
Building their own theater, he said, was “something that we talked about for months.”
Maranatha added, “I cannot tell you the thousands of hours that we have sat and discussed this. If it’s date night and we’re going out to eat, this is what we’re discussing.”
She gives credit to her husband for the idea.
“He’s always had great vision,” Maranatha said. “He thinks that just because we have a population of 6,000 doesn’t mean that we can’t have nice things and offer some of the same things that big cities do.
“If people put their heart and a little bit of sweat into something, there are so many things that could thrive here,” she said.
Rick said the theater idea “just came up in conversation.
“Everybody said, ‘We need something, (the people of) Vandalia need something to do.
“I felt like buying an old auditorium wouldn’t be a real good investment. These are modern times, and people want new ideas, new products, new services,” he said.
The Cripes’ theater has four cinemas, with the largest seating up to 235 people. One seats 180 people, and the other two each have seating for 113.
The two larger cinemas feature 3D projection, and the largest has a laser projector that is the only one of its kind in operation in the country.
With the standard projector now being used, bulbs last 3,000 hours, Rick said. The term for the laser project is 20,000 hours, he said.
“And if there is a problem with a laser, the equipment automatically compensates so the image is not compromised,” he said.
The Cripes can also accommodate customers with hearing-impaired and closed captioning needs, though they need advance notice to serve them.
Outside the cinemas is an entertainment room featuring a wide variety of games, and a concession stand offering popcorn, drinks and other refreshments. Movie-govers have a choice of popcorn and drink sizes, but the Cripes offer with them “all you can eat” and “all you can drink.”
“We want people to really enjoy their experience,” Rick said. “They already feel that they’re paying a high price for the movie, and we want to make it so they feel they can come in here and get their money’s worth.”
One of the reasons the Cripes decided on four cinemas, Maranatha said, is that movie theaters are required to keep first-run movies for a certain period of time, so they must have more than one cinema in order to provide variety to their customers.
The process to build the theater was a lengthy one, Rick said.
“I think we had over 30 sets of drawings,” he said, talking about his design work with Reid Torbeck, who is an engineer for Rick’s local construction company, Precise Construction.
“We kept researching and researching, and it finally came to where this is what we decided on.
That research included visiting other facilities. “Every time we would go on vacation, we would go to a different theater,” Rick said.
“I bet that I’ve been in 50-100 theaters,” he said.
In addition to the regular movie showings, Maranatha said, they plan to do “a lot of promotional things.”
The Cripes plan to work with local restaurants on promoting each others’ businesses, and they also want to work with local schools for field trips and other special programs.
Their mission to create something for the community, the Cripes said, could only be completed with the support and assistance of so many people.
“We want to give God the glory – that’s the main thing,” Maranatha said.
“There are so many people to thank that I can’t even list them all.
“We appreciate so many people who have helped us, down to picking up our son or daughters at practice, and the family and friends who helped stock candy items at midnight,” she said. 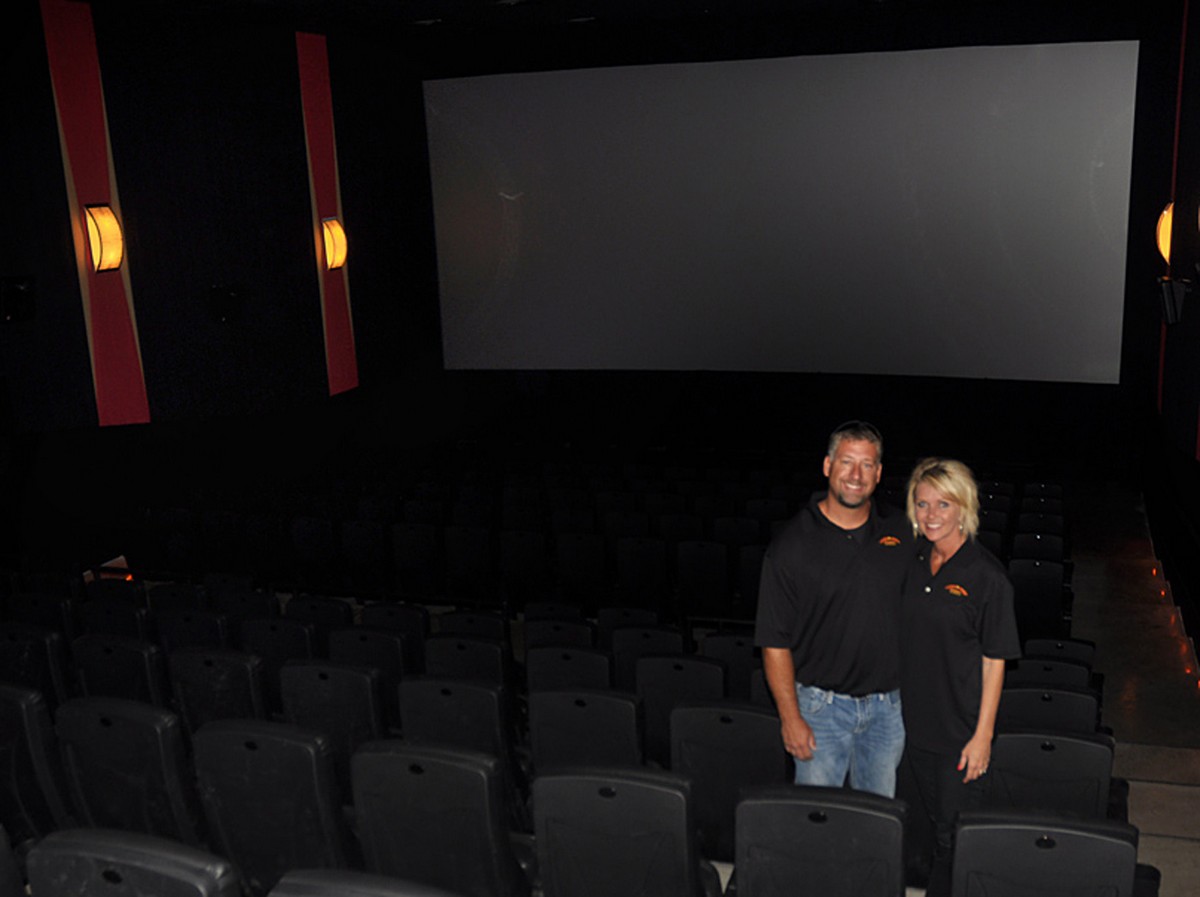 Rick and Maranatha Cripe are shown in one of the four cinemas at Starmax Cinemas. 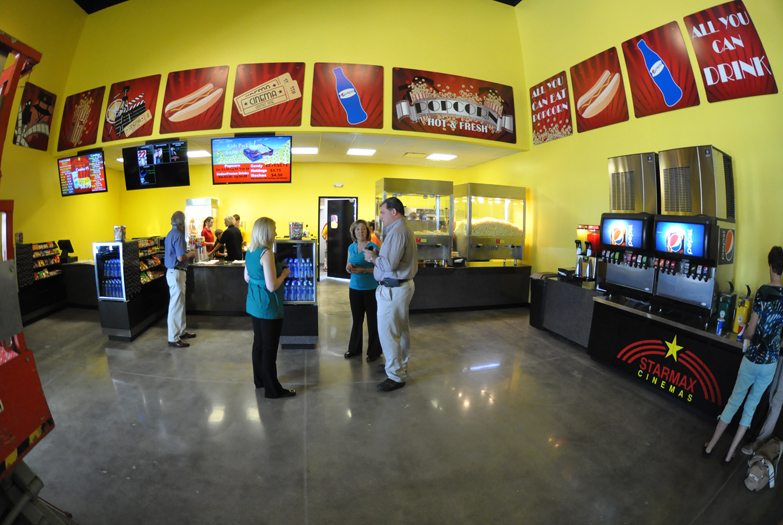 The concession area at Starmax Cinemas 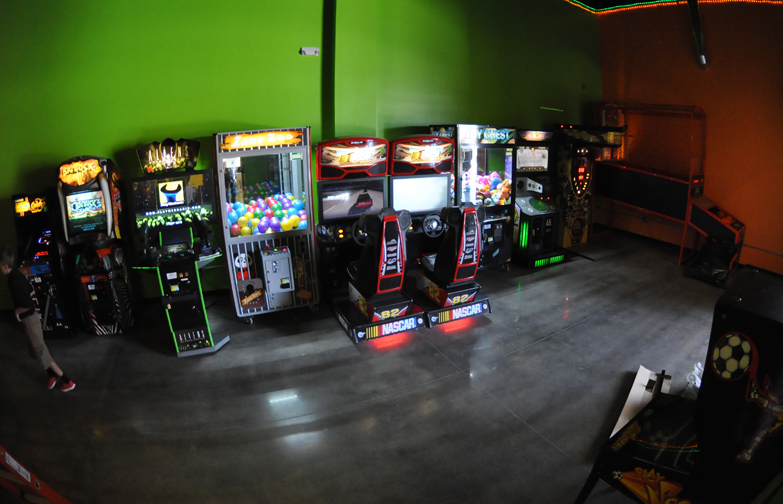 The game room at Starmax Cinemas