VANDALIA – Six Vandals got into the scoring column in the team’s first tournament game in Tuesday’s summer-opening Vandal Shootout, but Vandalia would run into a tough Breese Central team in the second round to end its shootout with an 3-5 overall record.

The game was close for the first 10 minutes, but Vandalia used a 5-0 run to establish a lead and closed the game on another 5-0 run to secure the win.

Both runs started with a layup by rising sophomore Kain DuFaux and included a 3-point play.

Breese Central opened the game on a 6-0 run and used consistent scoring the rest of the way to earn a 31-14 victory.

Vandalia cut the lead to 13-9 with 11:46 left in the game, but Breese Central recorded back-to-back breakaway layups off of steals to spark a 10-2 run that effectively sealed the win.

The Vandals amped up their defensive pressure following halftime against Ramsey, and were rewarded with several turnovers that helped secure a victory.

Vandalia forced four turnovers on Ramsey’s first six possessions of the second half, going on a 10-0 run in the same span to erase a five-point halftime deficit on the way to a 52-46 victory on Tuesday in the first game on day two of the summer-opening Vandal Shootout.

Rising senior Collin Nestleroad led the game with 18 points, and he scored 17 of those in the second half, including nine of the points during Vandalia’s 10-0 run.

The teams traded the lead five times in the first half, but once the Vandals got the advantage in the second half, the Rams were unable to get closer than three points of the lead.

Later on Tuesday, Vandalia was defeated by Seneca, 53-44.

Rising sophomore Richie Well sank a 3-pointer with 2:33 left in the game to break a 55-55 tie and then stole the ball with 27 seconds left to seal Vandalia’s 59-55 win against Patoka in the season-opening Vandal Shootout.

Well’s 3 was the last field goal of the high-scoring, fast-paced battle between area rivals, and he led the Vandals with 17 points.

Rising Patoka junior Dylan Back made six 3-pointers to lead all scorers with 20 points, and rising senior Tyler Back added 17, 15 of which came in the first half as Patoka eventually came back from a 15-2 deficit to take a lead.

The Warriors forced a pair of ties in the second half, but never could reclaim the lead.

Other leading scorers for Vandalia were rising seniors Austin Durbin and Collin Nestleroad, with 12 points, and rising freshman Nathan Casey, with 11.

Later in the day, the Vandals lost an early lead when Edwards County went on a 9-0 run around the halftime break and struggled down the final stretch of a 53-42 loss.

Rising senior Collin Nestleroad had 22 points for the Vandals, and rising sophomore Richie Well had 12, as just five players scored in the loss, which saw Edwards County finish the game on an 8-2 run.

That run came shortly after a five-minute scoring drought for both teams. 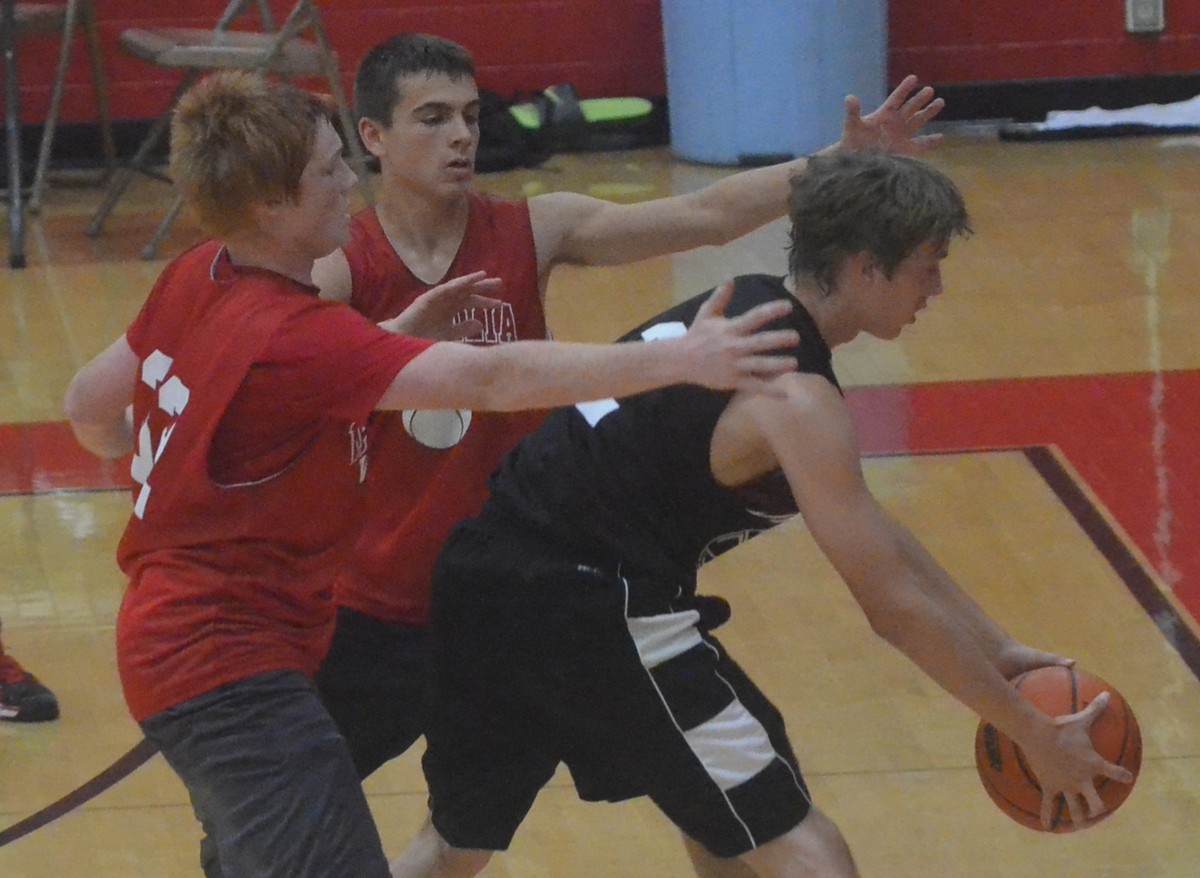 Vandalia’s Kain DuFaux (left) and Austin Durbin double team a Decatur Lutheran player on Tuesday during the first round of the tournament in the summer-opening Vandal Shootout. 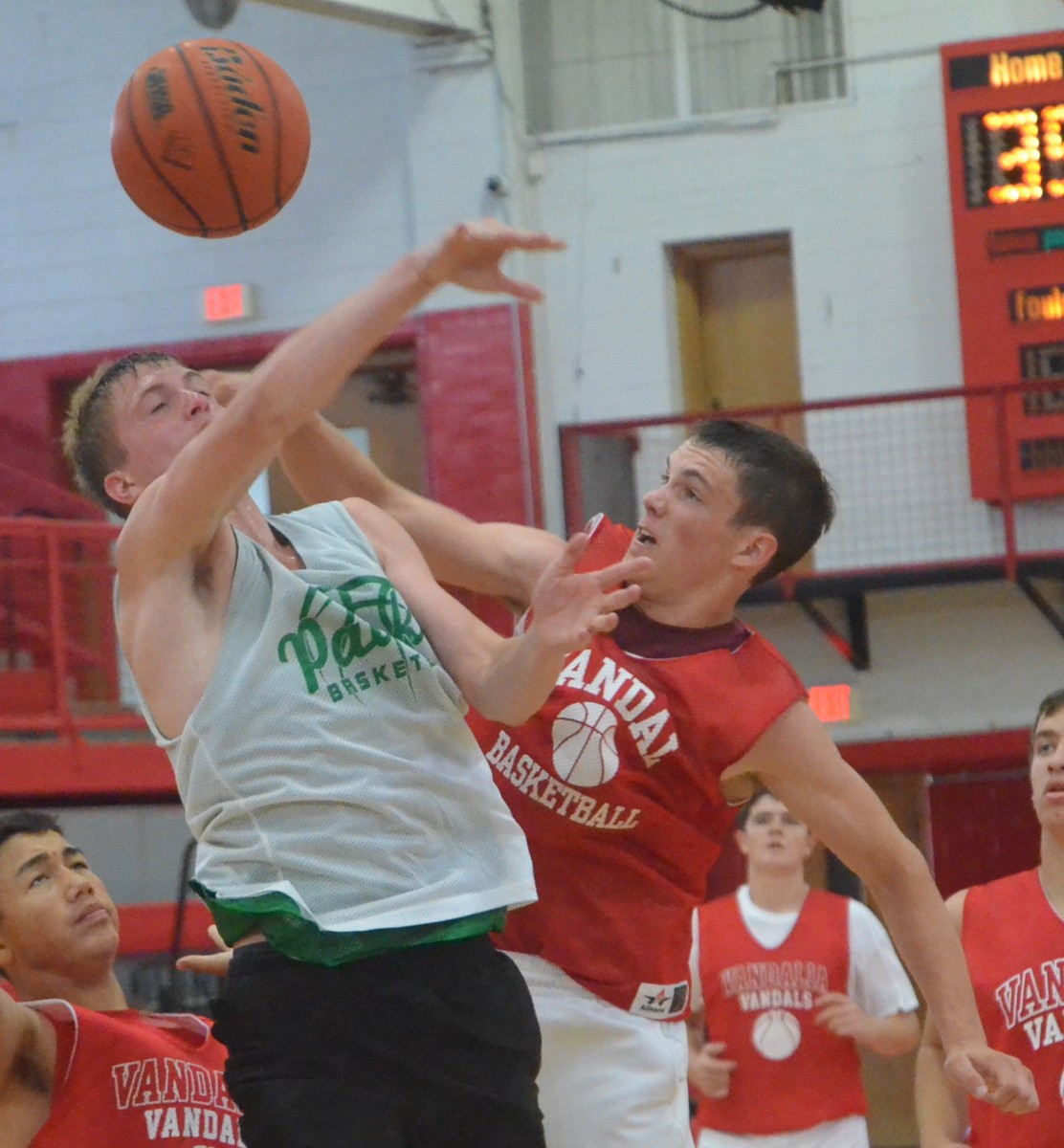 Vandalia rising senior Collin Nestleroad (right) blocks the shot of Patoka rising senior Tyler Back during a game on Monday in the summer-opening Vandal Shootout.

Patoka’s Tyler Back shoots a jumper on Monday during a pool play loss to Vandalia. 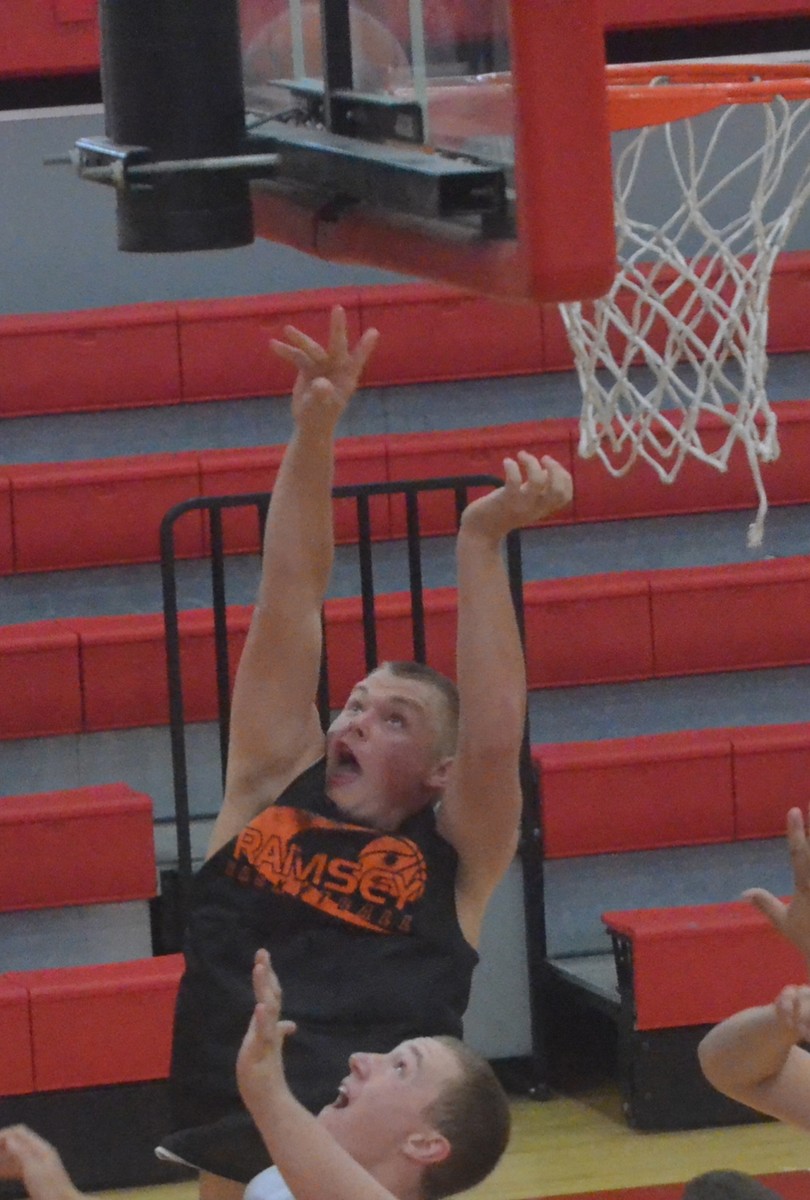 Ramsey’s Carson Thomas scores a layup during one of Monday’s pool play games.