Emmett Kelly, who became famous the world over as “Weary Willie,” the sad-faced clown, had his beginnings in a small Kansas town.

Born in Sedan, Kan., on Dec. 9, 1898, Emmett was called "Tater" in his youth, alluding to his Irish heritage. His father, for whom he was named, was a section foreman for the Missouri-Pacific Railroad and the railroad owned the house in which Emmett Jr. saw the first light of day.
In his biography, “Clown,” published in 1954, Emmett wrote of his youth and the road that led him to the center ring of Ringling Brothers, Barnum & Bailey Circus.
His father, Emmett Kelly Sr., was born in County Cork, Ireland, and came to America at the age of 22, working first as a hod carrier in New York City. The Indians were still agitating when the young Irishman headed west to Nebraska to work for the railroad.
When he married 18-year-old Miss Schimick, of Bohemian descent, he was 40 years old. They were parents of two children, Emmett and Sylvia.
Emmett Jr. was nearly 15 years old when his father quit the railroad and moved his family to Texas County, Mo., buying a farm.  It was about this time that a teacher discovered that Emmett had artistic talent.
One day while the young man was in the field drilling wheat, the “Might Haag” circus passed by, headed for the next town. This was the first circus the boy had ever seen, and he was stunned by the colorful wagons and exotic animals.
That night, after chores, Emmett rode his bicycle to town and saw his first show ever, never once guessing that one day he would be a performer with this very circus.
When he was 18, Emmett packed his suitcase and headed for Kansas City, and it was here that “Weary Willie” was born on a drawing board. He worked at various jobs, including the Western Show Property Exchange, making the toy prizes given away in circus midways.
Emmett landed his first circus job with the Frisco Exposition Show. The circus traveled in 40 cars. Emmett’s act was to draw caricatures while dressed as a clown. He also practiced with the trapeze on the side.
Many of the clown impersonations in these days were white-faced clowns. The boss clown did not like the tramp impersonation, saying that it looked dirty, and would not allow Emmett to appear in this costume.
Emmett courted and married Eva Moore, who came from a family of performers. Eva and her sister, Mitzi, were double trapeze performers.
The young couple choreographed a trapeze act and became known as the “Aerial Kellys.” Two sons were born of their marriage – Emmett Jr., born near Dyersburg, Tenn., and Tommy.
While Emmett was pursuing his career, his sister, Sylvia, married and moved to Mulberry Grove in Bond County. When their father suffered a stroke while shucking corn, the elder Kelly sold his Texas County farm and moved with his wife to Mulberry Grove,  where he bought 70 acres north of town.
Emmett and Eva wintered with his parents for several years following the birth of their sons, and the eldest son spent months at a time with his grandparents while his parents were on the road.
Emmett and Eva were divorced in 1935, dividing the children. Tommy went with his mother, who later remarried, and Emmett Jr. remained with his grandparents in Mulberry Grove.
In 1942, Emmett was hired by Ringling Brothers, Barnum & Bailey circus, a job he would keep until 1956. He began to experiment with the “Weary Willie” character,  and one day at a resale shop, he picked up his first prop for “Willie” – the hat, which is now in a museum.
Emmett began to think about branching out, and Broadway beckoned. One of his efforts was in the show, "Keep Off The Grass."
During his stint on Broadway, he performed with greats such as Ray Bolger, Jane Froman, Jimmy Durante and Jackie Gleason.  His first movie part was in Selznick’s, "The Fat Man," a drama where “the clown did it.”  Although he wanted the part, Emmett worried what the children would think seeing “Willie” in a bad light.
From there, he was offered a part in Cecil B. DeMille’s “Greatest Show on Earth,” with Charlton Heston, Jimmy Stewart, Betty Hutton and Dorothy Lamour. “Weary Willie” played himself, and although he was a major character in the movie, he had no lines.
One of the stunts that Kelly came up with was to have “Weary Willie” sweep up the spotlight using a broom. He would slowly sweep the light into a pile and throw it away. It was a skit that comedienne Carol Burnett  later adapted for her show.
Kelly is quoted as saying, “By laughing at me, the audience really laughs at themselves,  and realizing they have done this gives them sort of a spiritual second wind for going back into the battle of life.”
His circus career spanned 55 years, and “Weary Willie” performed until he was 80.  He retired to Florida and died on March 28, 1979, following a heart attack. “Weary Willie” is buried beside his beloved mother in Rest Haven Memorial Park in Lafayette, Ind.
“Laughter of the children is something no clown can forget,” Kelly wrote.
To this old clown, that was what it was all about – the children. 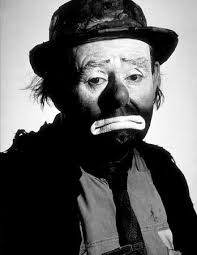