South Central had beaten Windsor/Stew-Stras three times during the year prior to meeting the Blue Devils in last Saturday’s sectional title game.

But a healthy and effective Christian Vonderheide proved to be a big difference-maker.

Vonderheide struck out eight and allowed four hits for WSS and also had two hits, three runs and an RBI as the Blue Devils knocked off South Central, 5-0, in the championship game of the Class 1A North Clay Sectional.

Vonderheide – who missed both of the teams’ fall contests due to injury – did pitch in South Central’s 12-9 win on May 6, but did not factor into the decision in the 10-inning game.

“We’ve talked about him since last year, when they beat us in the sectional finals,” said coach Curt Jones after the sectional semifinals.

Vonderheide struck out 10 in last season’s sectional title game, a 3-1 win for Windsor.

Seniors Tyler Ross and Kyle Bray, junior Dylan Smith and sophomore Brett Harmeier singled for the Cougars (13-16), who finished their season on Sunday with an exhibition game against Mattoon at Busch Stadium.

LOUISVILLE – The bottom of South Central’s batting order came up in a big way in last Wednesday’s sectional semifinal.

Sophomore Dre Hill, senior Kerrigan Henken and sophomore Brett Harmeier – the Nos. 7-9 hitters – had three straight singles to start a four-run rally that proved to be the difference in South Central’s 6-4 win against Dieterich, sending the Cougars to their second straight sectional title game.

“They’re batting down there for a reason, and that’s not a knock on them, because you have to have someone bat down there,” said coach Curt Jones. “Those guys have not been consistent all year, and for them to step up and start that big inning for us was huge.”

The rally sparked South Central’s fifth come-from-behind victory this spring and backed a strong outing from senior Tyler Ross, who struck out five in a complete-game win.

Ross was shaky in the early innings, hitting two batters and walking three in the first four frames before facing just 11 hitters over the final three innings.

“It seemed like he was ahead more in the count the last two or three innings,” Jones said. “Early, he was putting guys on base with no outs or one out, and that’s usually disastrous.”

Dieterich (11-13) took a 3-0 lead into the third inning, but Ross brought home senior Kyle Bray on a single, and junior Noah Powless scored on a wild pitch to trim the lead.

The Movin’ Maroons threatened again in the bottom of the third, loading the bases with one out, but when Marshall Mellendorf flew out to right field, the Cougars completed the double play when Clayton Compton slipped while trying to score.

Sophomore Gavin Ratermann fired the ball to first baseman Bray, who then threw a strike to Powless at third to end the inning. It was the second straight game that Ratermann had an outfield assist.

“You look for momentum changes in the game, and that probably was – with the bases loaded and one out,” Jones said. “The kids get so sick of practicing it, but twice in the postseason, we’ve made that play work.

Hill – a pull hitter – hit an opposite-field single, Henken rifled a high pitch into left, and Harmeier, a left-handed hitter who typically hits up the middle or to the other field, pulled his single into right.

Harmeier earned an RBI, and two errors allowed Henken to score. Harmeier was cut down at second on Ratermann’s fielder’s choice.

Junior Dylan Smith followed with a two-run home run to center for the game-winning RBI. 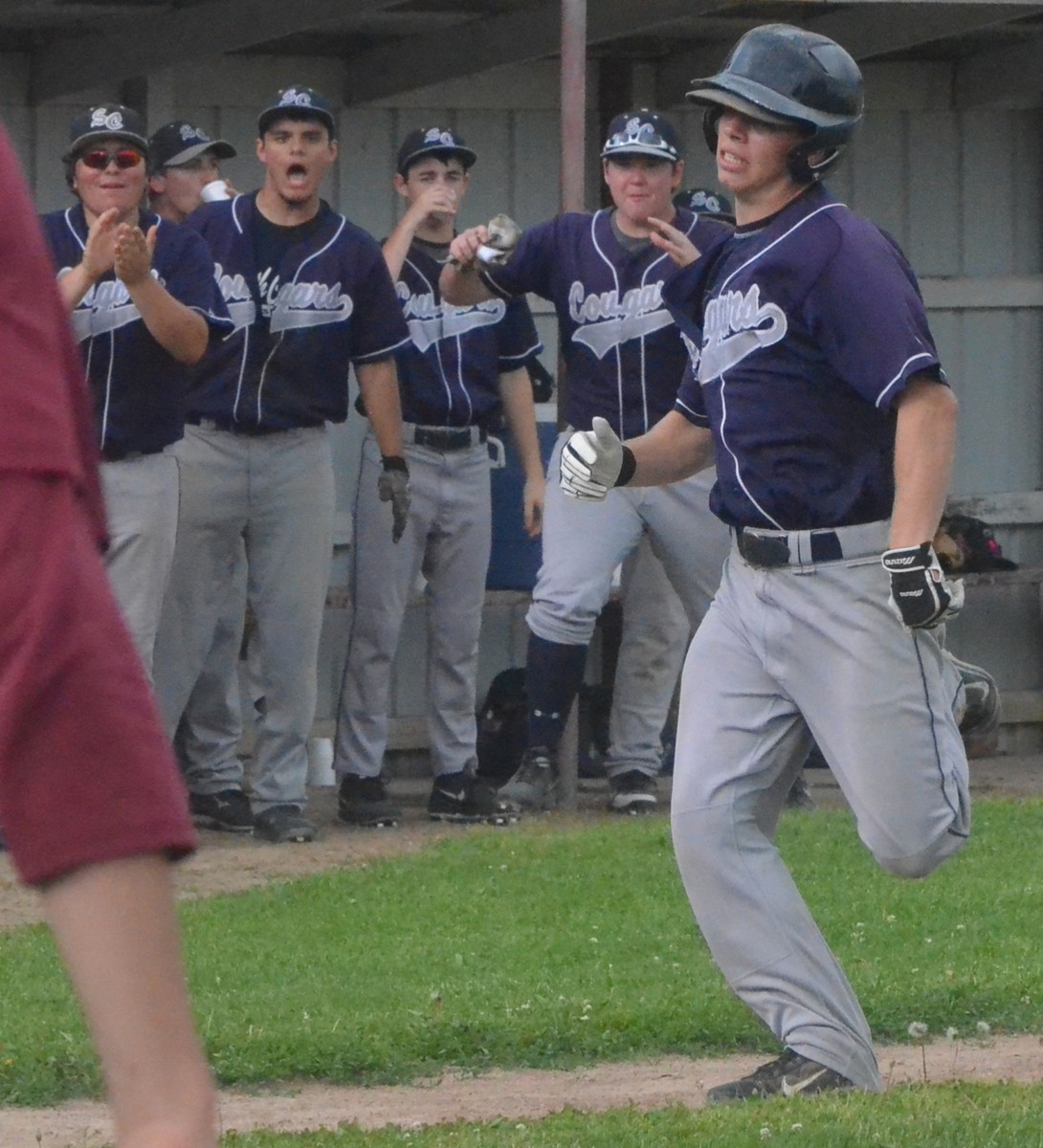 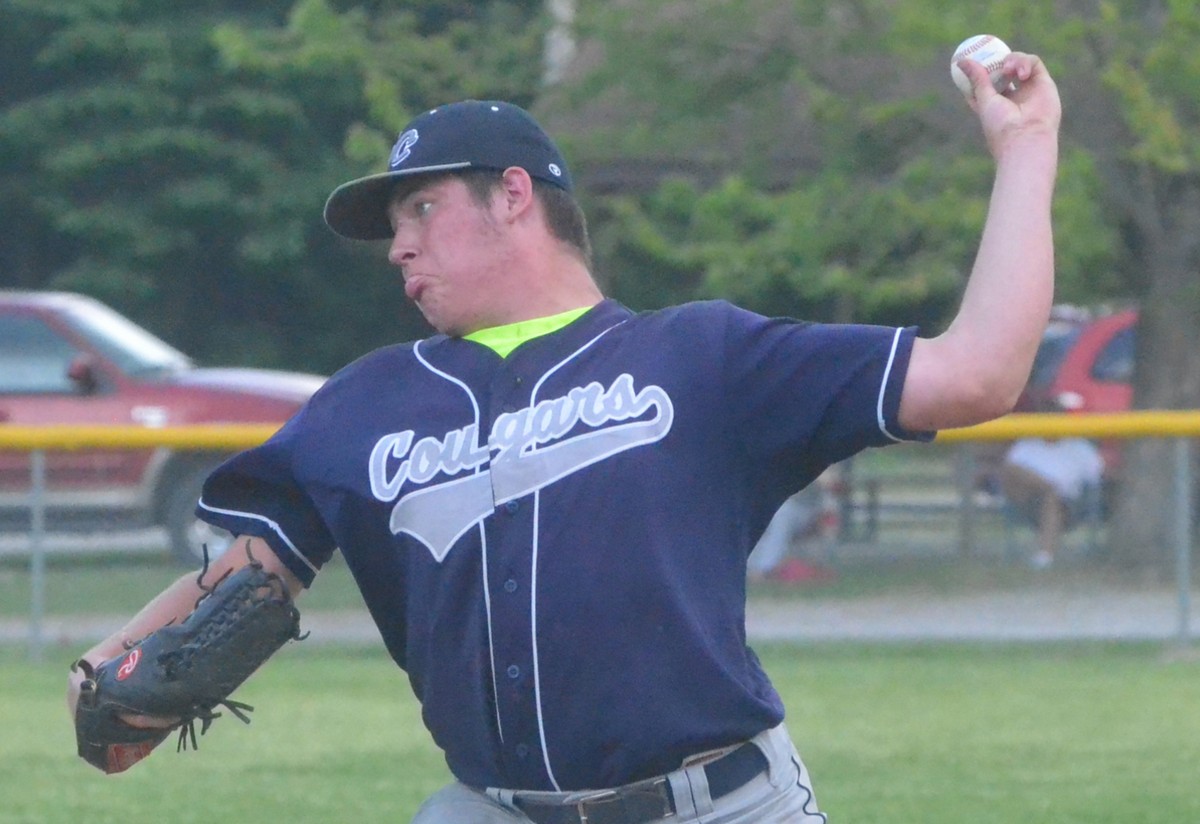