VANDALIA – A year off doesn’t seem to have hindered Connor Beasley’s ability to be an ace pitcher.

In his first competitive start since he pitched a couple of spot starts for Post 95 last June, Beasley pitched eight strong innings for Vandalia’s Sr. Legion squad on Monday, leading Post 95 to a 5-4 win against New Baden.

“It’s been about a year since he’s pitched competitively,” said coach Jacob Riedle. “I was expecting him to start wearing out around 60 or 70 pitches, but before we knew it, it was the eighth inning and he was over 100.

“A lot of guys will take a week or two off, and will get rust and start wearing out,” he said. “He takes a year off, gets a couple of bullpen (sessions) and is already ready to go against a good New Baden team.”

Noah Powless swatted a solo home run to get Vandalia (3-0) on the board in the second, and he added an RBI double during four-run third.

Otherwise, Post 95 was mostly held down offensively by New Baden’s Zach Lindsay, who pitched in relief for Southwestern Illinois College this past spring.

Lindsay struck out 12, walked one and allowed six hits, using an effective curveball as a complement to his fastball to fool Vandalia’s hitters.

“He was mixing speeds and throwing us off,” Riedle said. “He easily deserved to win, but we got a couple more in that one inning.”

Gavin Ratermann sparked the third-inning rally, singling on a hit-and-run to advance courtesy runner Colin Ledbetter to third with one out.

After a strikeout, Kyle Bray stroked a two-run double to the right-center field gap, and Powless followed with an RBI double to center.

Brett Mueller – who has six singles in 10 at-bats through three games – reached on an infield single, and Johnnie Clift rifled a single to left to bring home Powless.

Bray, Powless, Mueller and Clift lined up as Vandalia’s Nos. 3-6 hitters, and Riedle said that rallies such as Monday’s could be a regular occurrence.

“I feel very confident in them,” Riedle said. “Especially when they start getting more reps and get going, that’s going to be a very tough middle of the order to get past.

“They have some good complement guys around them, so order-wise, we’re tough.”

Beasley (1-0), who is showing improved velocity on his fastball, struck out six, including three batters in the final two innings of his outing.

He allowed four earned runs on seven hits and two walks, running into trouble in the fourth when New Baden scored three runs on four hits and some heads-up base running.

“Other than that one inning and that one pitch to their No. 3 hitter, he was just on tonight,” Riedle said. “He stepped up and delivered, and that’s what you like to see out of a guy who you expect to be one of your top pitchers this summer.”

Jacob Behrends induced three ground balls on nine pitches in the ninth to pick up a save.

Saves could be common for Post 95, as there are 11 players on the roster who have legitimate track records as pitchers.

“Once we get going and get some of the rust off of some of the guys who haven’t pitched in a while, I’m sure we’ll get saves from quite a few guys,” Riedle said.

Vandalia did most of its damage in the first inning of both games while sweeping a season-opening doubleheader at Jerseyville on Sunday.

Brett Mueller went 5-for-7 in the two games, and Carson Smith was 4-for-7, and six pitchers combined for 21 strikeouts.

In the season-opener, Johnnie Clift smacked a two-run triple as part of that big first inning, and Colin Ledbetter also had a two-run single. Two other runs scored on a wild pitch and a passed ball.

Ryan Miller scored in the fourth when Dalton Crisman was hit by a pitch with the bases loaded, and Nate Ketchem later scored on a passed ball.

Connor Beasley struck out two in the fourth, and Clift struck out four in the final three frames. The trio combined to toss a one-hitter.

In game two, every player in the starting lineup had at least one hit, as Vandalia pounded out 16.

Post 95 led off the game with six straight singles, with Smith’s two-run hit being the biggest of the inning. Behrends, Miller and Ledbetter also had an RBI.

Mueller (1-0) struck out three over the first three innings to earn the win. Quinn Wadkins struck out five over the next three frames, and Brock Trexler struck out one in the seventh. 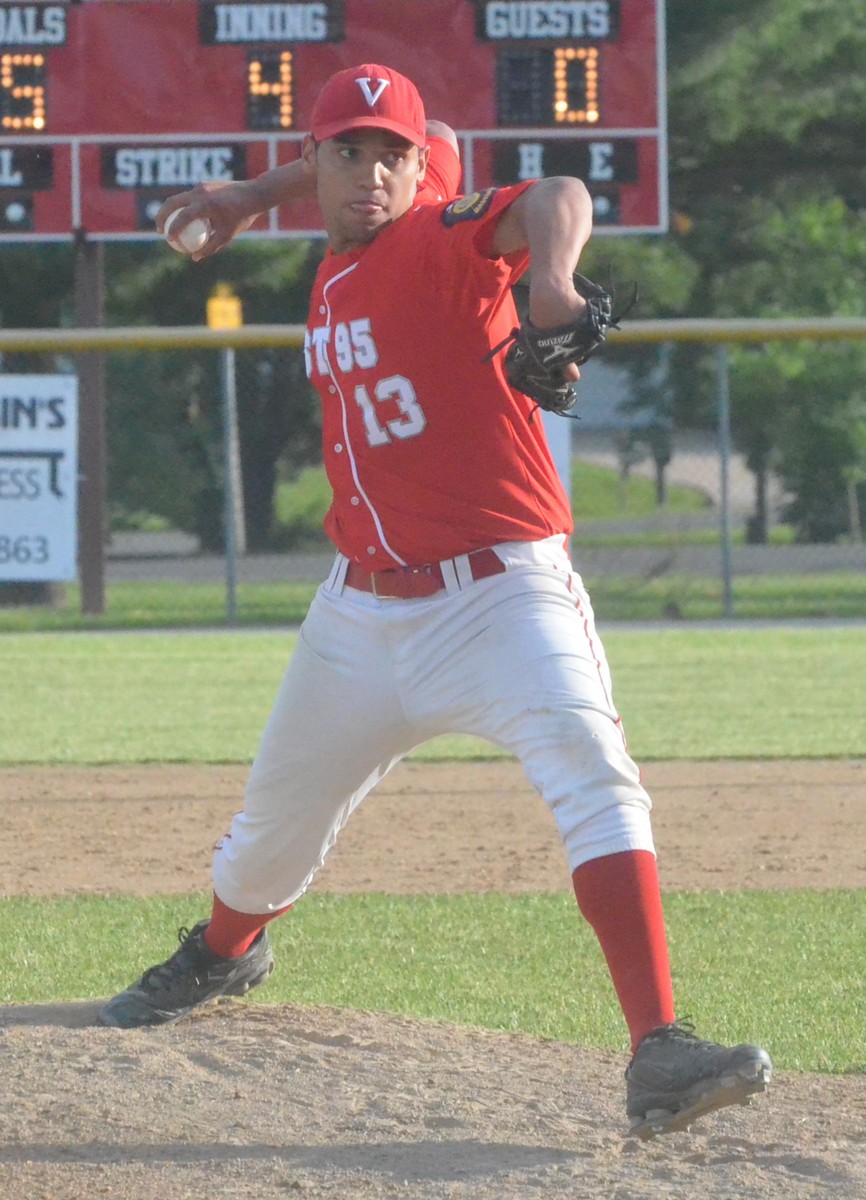 Post 95’s Connor Beasley fires a pitch during Vandalia’s 5-4 win against New Baden on Monday. He struck out six in his first start since last June. 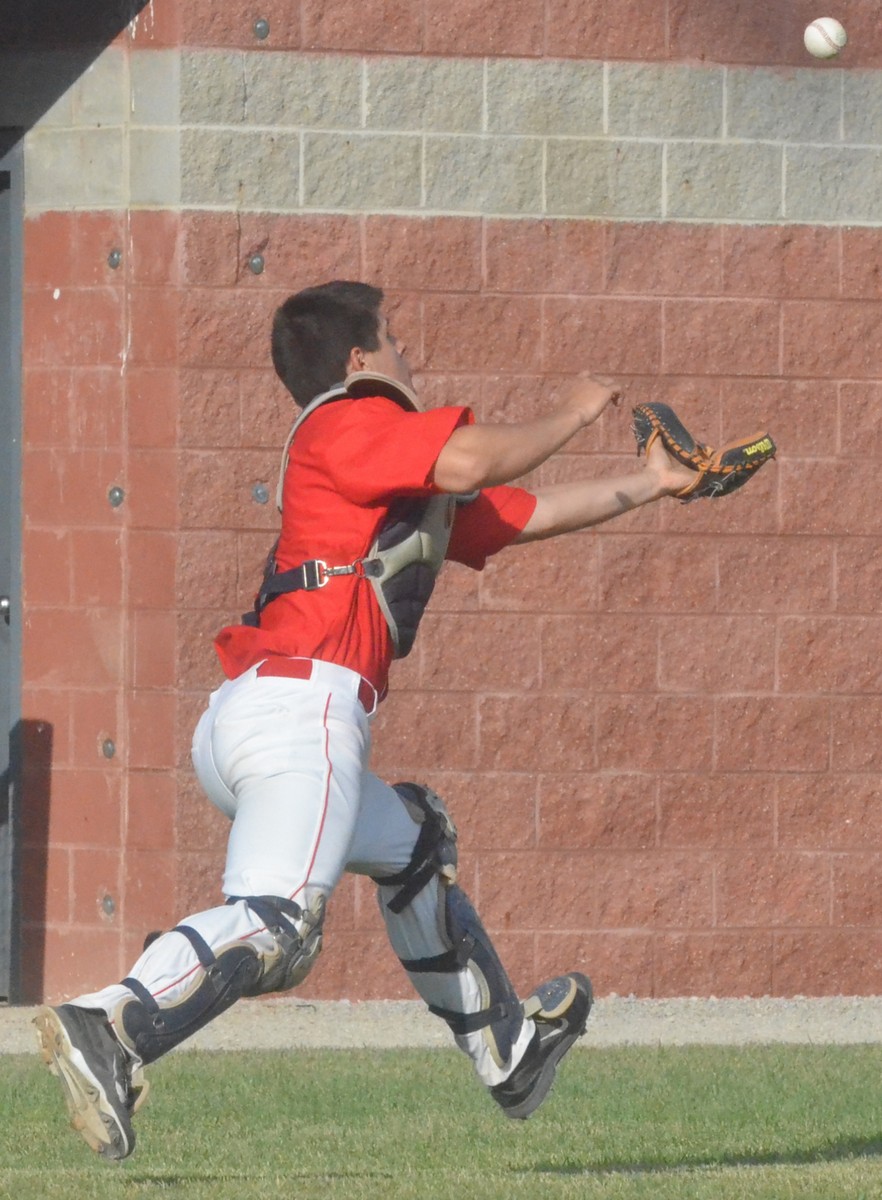