William “Bill” Haselhorst, the current president of the Vandalia Lions Club, will be inducted as District 1-L governor and take office July 8, following training in Toronto, Canada, at the Lions’ International Convention.

John Dotray, a five-year member who is the Vandalia club’s current vice president, will move up to president on June 23 and take over those duties in July.
Bobby Kissiar serves as second vice president and is largely responsible for the special events that everyone looks forward to, such as the recent circus and the upcoming car show and kids’ cardboard box derby.
Kissiar talked about the Aug. 30 car show and cardboard box derby for kids 6-7 years old and above to be held at Vandalia Lake as part of a family fun day.
The cardboard box cars will be made to sit on the child’s shoulders as they run. The cardboard cars will be judged before the derby race, in case the cars get damaged in the race.
So many enjoyed the circus that they plan to have it back again next year.
It is obvious that Kissiar enjoys his office as vice president, as he enjoyed riding the elephant. He said that the circus is good for the community, as it spends quite a bit of money around town on groceries, etc., and bought food and hay in large quantities for the elephants and other animals.
Lions Club Future Special Events
• July 3-5-Fireworks display and carnival.
• Aug. 30-Car show and cardboard boxcars for kids.
• Sept. 5-Lions Candy Day.
• Oct. 15-Harlem Ambassadors basketball at the Vandalia Community High School gym, with tickets now available.
• Oct. 30-Lions’ 78th annual Halloween Parade.
Lions Help Others
The Lions accept eyeglasses, hearing aids, old keys, soda can tabs, used ink cartridges, all recycled to help others. They also help with disaster relief, such as the tornado damage last November.
“If  Vandalia is hit by a tornado and there are at least 100 homes affected,” said Haselhorst, a member of the Vandalia Lions for six years,”we will have a check for   $10,000 in our hands immediately to help the needy."
A Little Lions Club History
Haselhorst is well-versed in the history of the Lions club, as well as current events and projects.
“The Lions Club started in 1917, so we are working on our 97th year,” he said.
“A fellow by the name of Melvin Jones started the Lions in Chicago. An insurance man, he decided there should be something to go out there to help the needy. He got some business men together and they formed the Lions Club.”
“In 1926, Helen Keller came to the Lions and she made her famous speech. She was blind and deaf from birth. She could not talk and the person who trained her to talk would have her put her hand on her nose, her mouth and her thumb and she learned to talk from the vibrations.
“She came to us at our convention in 1926, in Canton, Ohio. She gave us the speech and the speech was so dynamic that she asked us to be Knights of the Blind. This is why we are concentrated on the blind and the deaf, but we do other things, too. But that is our concentration, our focus,” Haselhorst said.
“We train leader dogs for the blind. Any person who is legally blind can come to us and we will provide them with a leader dog. It costs us $80,000, to train that dog.
“We are a non-profit organization and the people who give to us can write that off of their taxes,” he said. “Consequently, we put that that money back to use for the blind.”
The Lions Club was started in Vandalia …
… in 1928,” Haselhorst said. “I don’t know who started it.
“So, we’ve been the Lions Club here in Vandalia for 86 years. We are the largest volunteer service organization in the world.”
“This has spread on to Africa and we call it Lions,International, because we are overseas, and it is growing by leaps and bounds there, overseas, because they want to help the people who need help.
“But we here, in the United States, are declining in volunteers. It is hard to find young people to volunteer. They have to be 18 years or older to be a member.
“We do have Leos, who are teenagers, but we don’t have anyone interested in the Leos program around here.
As governor of District 1-L, overseeing Lions Clubs in Altamont, Athens, Cero Gordo, Decatur, Effingham, Greenville, Mt. Pulaski, Hillsboro, Lincoln, Mt. Zion, Pawnee, Ramsey, Nokomis, Pana, Shelbyville, Springfield, St. Elmo, Strasburg, Vandalia “and many more,” Haselhorst said.
“My theme this year is ‘Do the Right Thing,’ and my goal is for each club to add one new member.
“My other goal is to start two new clubs, possibly one at the correctional center, which will be a specialty club. In other words, all of the people who work at the prison will be members, just them.
“My other goal is starting a club at the Kaskaskia College, and call it the Campus Club. I’m working to gain young members,” he said.
The bottom line is that we are fortunate to have the Lions Club in Vandalia and we should remember all the good they do to help others when we see them at intersections with their candy and at the special events they host, including the circus, car show, fireworks display and Halloween Parade. 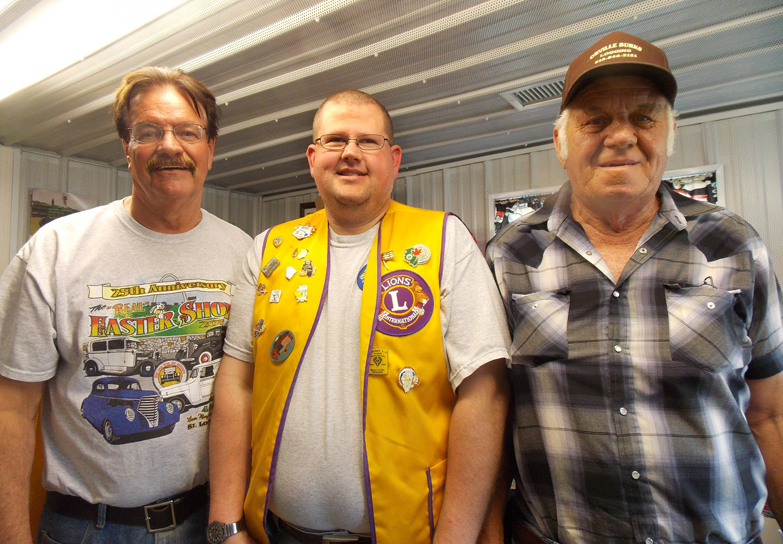 Bill Haselhorst (left) is moving up from president of the Vandalia Lions Club to District 1-L governor. John Dotray (center) is the new president, and Bobby Kissiar (right) is the club’s second vice president.