When I was in junior high, I was a member of the American Legion Junior Auxiliary that met one Saturday a month at the Crawford-Hale American Legion home in Vandalia.  Our meetings were held in a room  on the main floor that is now used for the military museum.

I don’t remember giving a second thought to the fact that this building had actually been someone’s house. I do remember the Steinhauer bird collections displayed in glass cases in the west wall of the room across the hall, and have written about it previously.
Back in the day, the upper story ballroom, reached by a graceful split staircase, was used for parties and wedding receptions.
While looking at Charles Mills’ book, "Fayette County, Illinois War Stories," published in 2001, a story on page 89 caught my eye. It told of how the veterans of World War I had turned the Fehren Mansion into the American Legion Home.
As the story goes, back in 1943, halfway through the U.S. participation in World War II, the older veterans realized that when the war was won, these returning soldiers would swell the ranks of the American Legion and they would need more space.
John Emert was post commander at the time and called on Dan Burtschi to head a committee of 20 members to decide whether to find a place or build one. One month later, Burtschi saw the unoccupied vine-covered Fehren Mansion on South Seventh Street, and “wheels began to turn.” He found out that a Mr. Thrasher of Texas owned the home, and he  began negotiations.
With the stipulation that the building be used only for an American Legion home, the price was set at $5,000. Burtschi sent a personal check for the asking price, and then called on his finance committee to raise funds.
In 1973, Dan Burtschi wrote an essay on acquiring the Fehren Mansion in which he wrote, “To my surprise, in five weeks, we had raised in cash, not pledges, $18,000. Dr. Mark Greer helped a lot.
“At times we had as high as 75 State Farm inmates cleaning up plaster, taking nails out of lath, cleaning lumber, etc. All of the laths were bundled and sold to Lutz at Mulberry Grove. There were around 50 truckloads of kindling, which we sold for an average of $2 a load in town. We sold around 50 doors, five or six fireplaces, pool tables and a lot of lead pipe came out of that house.
“The whole basement was dug by hand at night. We would have as high as 15 to 20 Legionnaires and volunteers of the city digging and shoveling dirt, and Eugene Crain would use my sand trucks to haul the dirt away. All of the bricks from the walls were cleaned at night and of evenings and on Sundays to get them ready to use in the back wall.
“Steel was tied up by the government because of the war, so I went to St. Louis and bought steel girders. The roof of the present building is all steel understudded, all welded. The two main girders, running east and west are 84 feet long and the sides are steel joined into these main girders that go through the building.
“Getting lumber and the rest of the steel was a tremendous job. Plastering started on the top floor, which was the largest plastering job ever done in Vandalia. Painting was a big job, too. Our mayor painted for 10 days,  along with the Legionnaires.
“We finally ran out of money and had a fund drive. The total cost of the new Legion home was $47,000, with a dedication held in June of 1946.”
Matthias Fehren, a Vandalia merchant, built his three-story home about 1863. Upon his death in 1874, the home passed to his daughter, Julia and her husband, Dr. Richard T. Higgins. They had no children and eventually the home passed into the hands of Mr. Thrasher. From there, we know the story.
The Burtschi name in Vandalia has always been associated with progress and growth,  and Daniel Burtschi showed that this family in the younger generation continued to give back to the people of Vandalia. 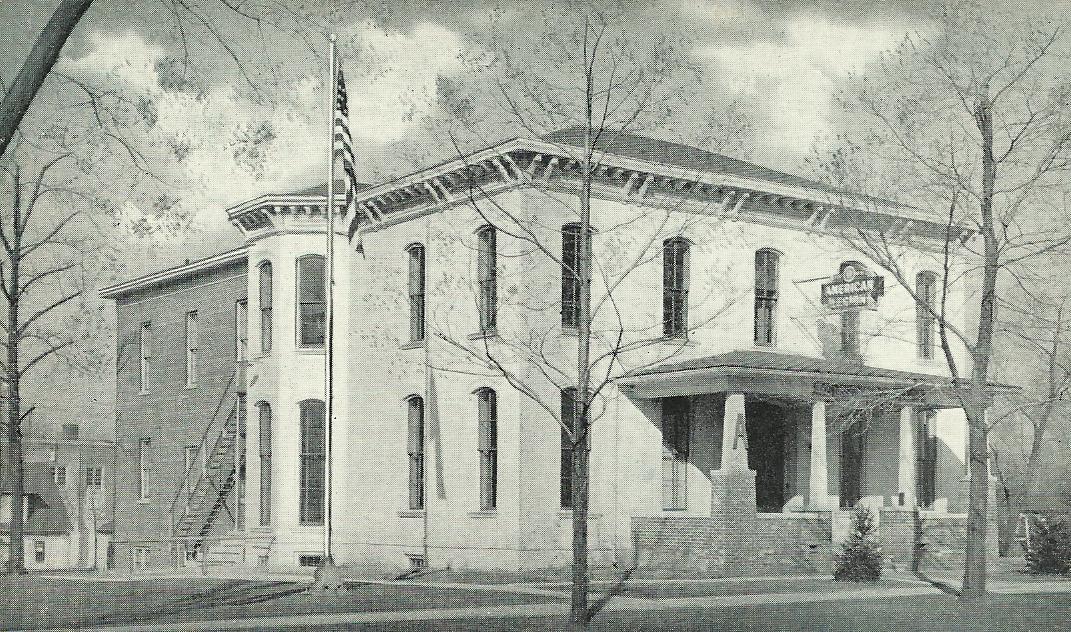 The renovated building became the home of the American Legion in Vandalia, as large numbers of veterans returned home from serving in World War II.

The Fehren Mansion was purchased in 1943 for $5,000 as the future home of the American Legion. The home was extensively renovated and was dedicated in 1946.