VANDALIA – Senior day was a special one for Vandalia’s Megan Godoyo.

Godoyo – one of four seniors  – struck out a career-high 15 batters and allowed just one hit on Monday in Vandalia’s 9-2 win against Ramsey in the first game of a doubleheader.

Godoyo expanded the strike zone, getting almost all of Ramsey’s hitters to swing at high pitches out of the zone, and at one point, struck out seven straight batters

“Her rise ball was effective, and they were chasing it, which made it more effective,” Buscher said. “This was good for her, because she was a little down after Saturday’s game, even though she pitched well.”

Ramsey sophomore Skye Kimberlin led off the game with a sharp liner to second base. Senior Brandy Protz ranged to make the play, but wasn’t able to corral the ball in time to retire the speedy Kimberlin.

Other than that infield hit, Godoyo was nearly flawless, issuing three walks and allowing a pair of unearned runs in the fifth.

“All she had to do was throw the ball high, and we went after it,” said Ramsey coach Mike Jackson. “We haven’t seen enough fast pitching this year – probably only three all year – and we couldn’t seem to bunt either.”

Godoyo’s previous career-high for strikeouts was 14, which she had amassed against Pana and St. Elmo/Brownstown this season.

Godoyo, senior Taylor Well and sophomore Karlie Bright had two hits off of Ramsey senior Whitney Moreland, who had seven strikeouts in the complete game and allowed five earned runs and walked just one.

Four of Vandalia’s first five batters singled, and four steals and two Ramsey errors helped bring all four of them across the plate, even though Moreland struck out the next two batters.

“We had an opportunity to steal some bases today,” Buscher said. “Not sliding may have cost us a run or two, but we did a good job on the bases.

“After that first shot, we saw that the catcher was leaving it high.”

Godoyo and Well had two-out RBIs in the second inning, and sophomore Gracie Morrison slashed an RBI single in the fourth.

Four straight singles in the fourth produced another pair of runs. The first three hits came by seniors, and Buscher said the class has been an asset to the program for the past four years.

“When I started coaching, they were in seventh-grade, and we started a youth program where they could play in some leagues,” he said. “They have been around for a long time, and have been playing for us for a long time.

“They take things light-hearted – maybe a little more often than we need – but they enjoy playing with each other.”

Ramsey got on the board in the fifth. Freshman Payton Rhodes walked, senior Paige Wilson reached on an error and freshman Shelby Rhodes walked to load the bases with one out.

Kimberlin sent another grounder to second base, but Shelby Rhodes was called out on interference, negating a run.

Two wild pitches in the next at-bat allowed Payton Rhodes and Wilson to score. The other runner for Ramsey (7-18) was Moreland, who walked in the fourth.

The Lady Vandals threatened again in the fifth, loading the bases with one out, but Moreland pitched out of the jam, and then retired the side in order in the sixth.

Ramsey salvaged a split in the doubleheader with an 11-4 win in game two.

Freshman Danielle Hill retired Vandalia in order through the first three innings and didn’t allow a run until the sixth.

Wilson and Skye Kimberlin picked up RBIs in the second, and Megan Kimberlin homered to open the third.

Ramsey (8-18) scored four times in the fourth, with several walks and a couple of errors helping the runs cross the plate, and two more runs scored in the fifth when Skye Kimberlin reached on an error.

Vandalia (8-21) got on the board in the sixth when sophomore Karlie Bright scored on an error, and senior Kylie Sellers came home on a wild pitch.

Two more runs scored in the seventh when Sellers reached on an error. 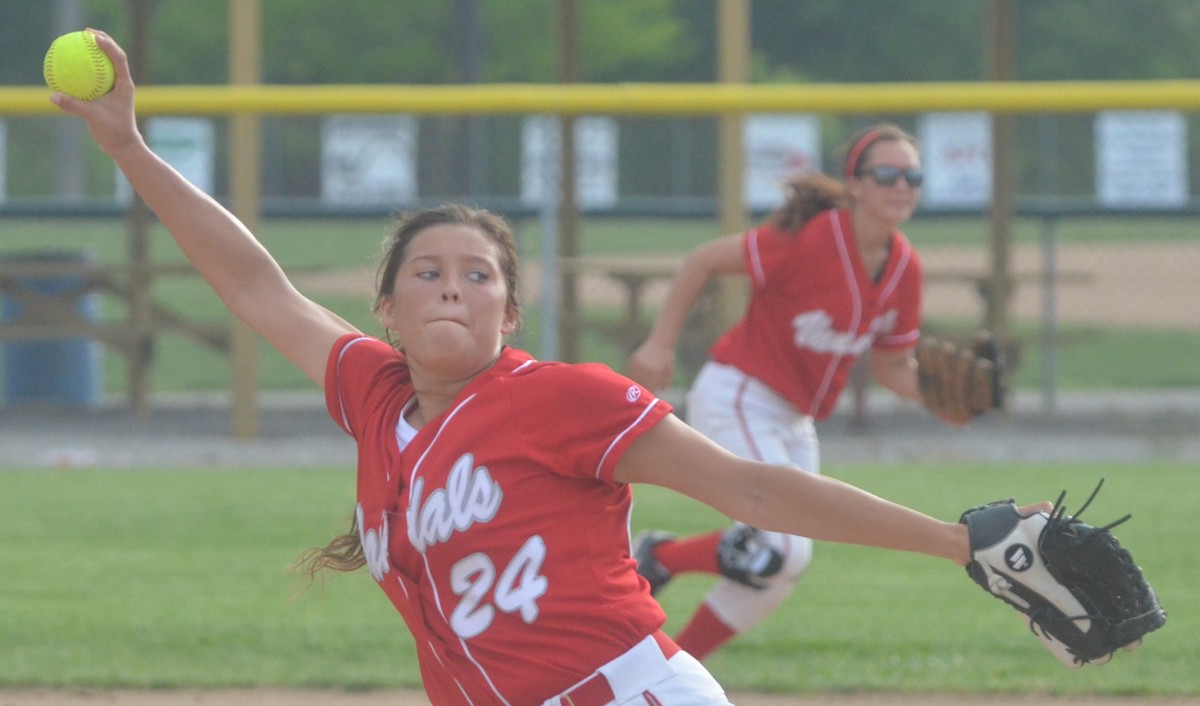 Vandalia senior Megan Godoyo (24) fires a pitch during her 15-strikeout performance in Monday’s win against Ramsey, as senior Brandy Protz moves to cover first base on a Ramsey bunt attempt.

The Vandalia softball team celebrated its seniors before Monday’s doubleheader against Ramsey. The seniors are pictured above with family members. The athletes, from left, are: Taylor Well, Kylie Sellers, Brandy Protz and Megan Godoyo 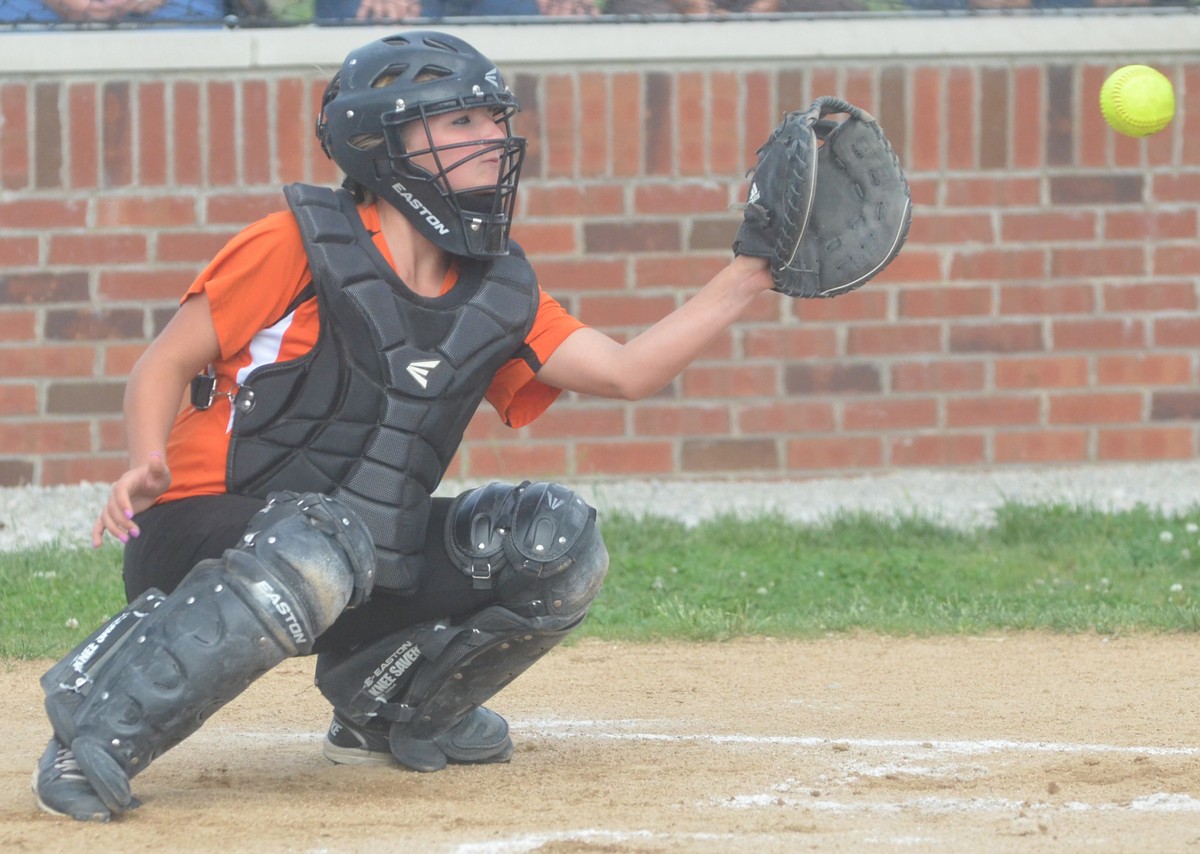