In announcing that ruling by a State Fire Marshal investigator, Vandalia Police Chief Jeff Ray said authorities are offering a $2,500 reward for help in finding the person who started the fire at High School Apartments.

Anyone having information about the fire at High School Apartments is asked to call Fayette County Crime Watchers, 283-1986.
One of the residents of the apartment complex, 63-year-old Jerry Voris, died in the fire, and heavy smoke from the small blaze caused the evacuation of all complex residents.
Fayette County Coroner Bruce Bowen pronounced Voris dead at the scene at 1:06 a.m., and he reported on Tuesday that it was determined through an autopsy that Voris died as a result of the fire.
Of the close to 50 residents evacuated, nine were taken by ambulance to Fayette County Hospital, where six were treated and released, and three were admitted.
Vandalia’s volunteer firefighters were summoned to the apartment complex at 211 N. Kennedy Blvd., formerly known as Central High Apartments, shortly after 12:30 a.m. by the complex’s alarm system.
A short time later, a Vandalia police and fire dispatcher passed on to firefighters through radio traffic a report of heavy smoke coming from the west side of the building, which served as a high school and elementary school before being converted into apartments.
The first firefighters to enter the building from the ground floor entrance on the west side quickly found both the fire and Voris, according to Steve Stombaugh, Vandalia Volunteer Fire Department first assistant chief.
Stombaugh said that the fire was in a ground floor hallway, among a pile of clothing, furniture and other items.
He said that firefighters extinguished the blaze in a short period of time, with help from an overhead plastic water pipe. Stombaugh said that line broke “and acted like a sprinkler. That really helped it from spreading.
While some firefighters entered on the west side to put out the fire, others entered on the south side to begin evacuating residents. At both entrances, firefighters began working to rid the building of the heavy smoke.
Within about 10 minutes of the VVFD being dispatched, Stombaugh said, he called for mutual aid assistance from the Brownstown Fire Department, knowing that his department would need help in getting residents out of the building.
Vandalia Mayor Rick Gottman arrived on the scene a short time after firefighters were paged out, and he contacted the Fayette County Emergency Management Agency and American Red Cross to assist the displaced residents.
Also lending aid were Ray, city officers and Fayette County Sheriff’s Office deputies, and several individuals who were at the scene.
Vandalia School District officials were also contacted, and arrangements were made to house the displaced residents in the Vandalia Junior High School gym temporarily, with Maintenance Supervisor Mike Kopp and Transportation Supervisor Mike Critcheloe accomplishing that task.
“The intergovernmental part of it worked really well,” Stombaugh said in talking about the teamwork among local entities.
“Jeff (Ray) was extremely helpful to us, Kendra (Craig, EMA coordinator) and her people took care of the residents, and Mike Critcheloe and Mike Kopp deserve credit for coming out in the middle of the night to get people into the junior high,” he said.
Stombaugh said that the construction of the building was both a help and a hinderance.
“The old plaster walls and ceiling helped the fire from spreading, but they also hurt, because we had a hard time ventilating the building,” he said.
“That was the major thing – we couldn’t get rid of the smoke,” he said.
“But that building performed the way it was designed,” Stombaugh said.
Because of the construction, he said, the heavy smoke was limited to hallways in the building.
“All of the hallways had smoke, but very, very few apartments had any hint of smoke,” he said.
“The apartment next to that of the man who died in the fire have faint smoke, and we got him out through a window,” Stombaugh said. “Had he tried to get out through his apartment door, he could have also died.”
Jim Newman of Jacksonville, who owns High School Apartments with his mother, arrived in the early morning hours.
“My main concern is to get their (residents) back in order, to get the place cleaned and back to normal as soon as possible,” he said.
Newman praised the efforts of local entities in helping the residents, personally thanking firefighters who were still on the scene for knocking down the fire and getting residents safely out of the building. 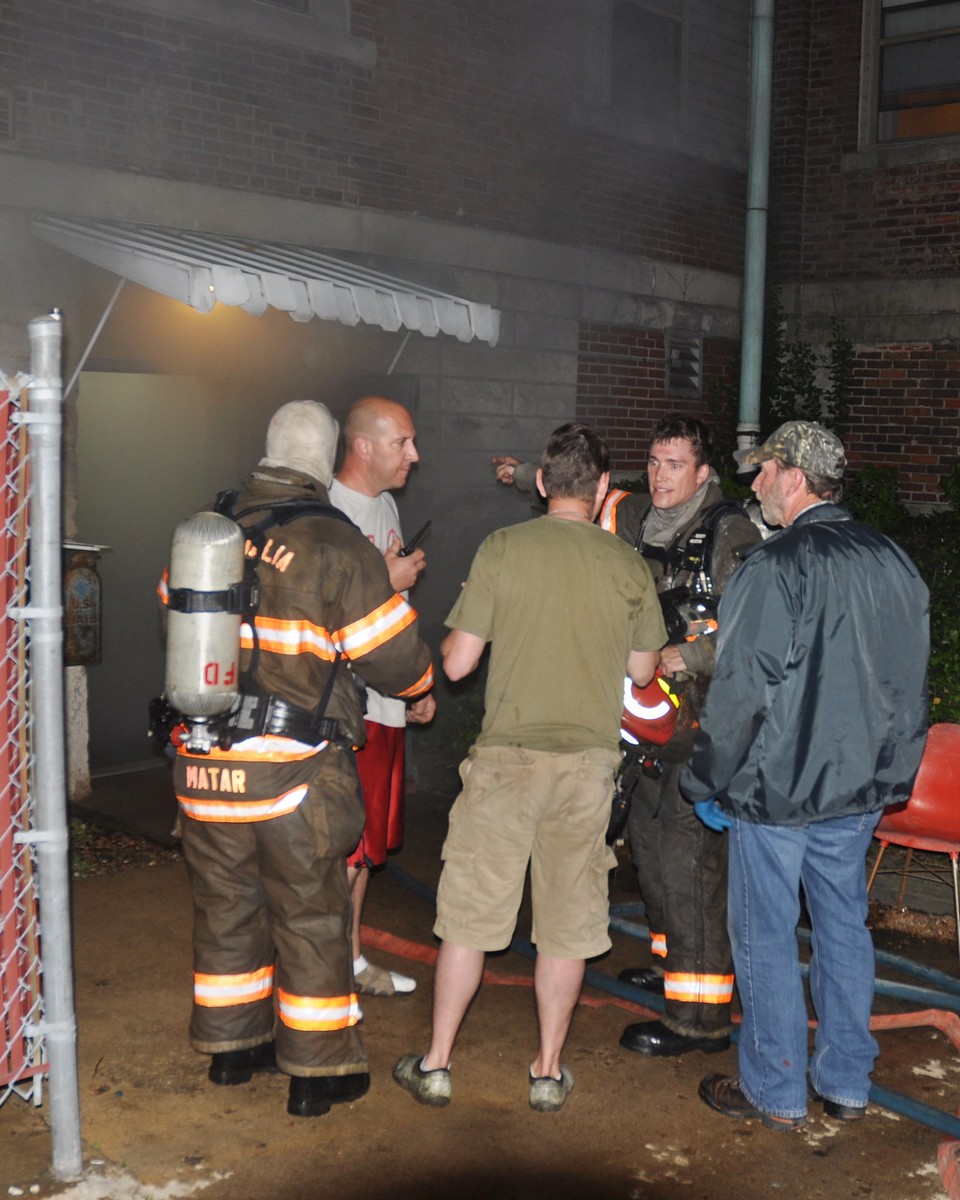