Notable Facts About Ramsey
The village of Ramsey is a pioneer in history. It is documented in a proclamation by the state senate and representatives that Ramsey was the first town in Illinois to see women vote.

Athilla Stoddard was the first woman to vote publicly, at age 83. She had seen her husband and seven children pass on before her.
The proclamation also contained some old photos of the area.
Ramsey was named for an early settler, William Ramsey, who had settled on a creek, now known as Ramsey Creek.
It was surveyed as a town in 1857, and began growing when the family of Valentine Brazil built a log cabin there. It was incorporated May 4, 1864, and re-incorporated 13 years later.
Illinois Central Railroad’s completion of its line on Jan. 1, 1855, contributed to Ramsey’s growth, making Ramsey a local trading and shipping point for nearly all townships and also had the biggest railroad depot on the line.
Not surprisingly, the business district grew and included an apple evaporator company (there were many nearby orchards), a factory producing hand-made wagons, a brick plant, a creamery and a beaver hat company.
By 1878, there were six dry goods and grocery stores, a drug store, a hardware store, two saloons, a boot shop, a hotel and a harness factory.
The businesses were well-supported by Ramsey citizens as it grew to be the second largest town in Fayette County.
It had its own newspaper in the 1880s, “The Ramsey Democrat.
The Ramsey News-Journal, started in 1911, was purchased by the next year by Julius Mueller and remained in the family for 100 years.
Notable people from the Ramsey area include Tex Williams, a country music singer, writer, actor and recording star of the popular “Smoke, Smoke, Smoke, That Cigarette,”  which was a No. 1 hit song for an extended period of time. Others are: Glen Hobbie, a big league pitcher; and H.L. Hunt, an oil tycoon who inspired the  popular TV series “Dallas.”.
As Ramsey prepares for its 150th year celebration this Saturday, Verda Sorbus, who observed her 95th birthday in February and lived half a century in Ramsey, shard some of her memories.
‘Ramsey was a good place to live’
So says Verda Sorbus in summing up her memories of living in Ramsey for 52 years. She now resides at Brookstone Estates in Vandalia, where she relocated from her home in Ramsey.
She was born in Effingham County and moved to Bingham with her parents (Bertha and Henry Strus).
She attended one year of college and taught at Cloverleaf School, a country school.
She met her husband, Abner, at Charleston while in college. He was also a teacher, and taught five years in Effingham County. He also worked on a railroad for a while, then taught all grades for over 35 years.
“He taught kids at Whitten School, a country school,” she said. “When Whitten School closed, he taught in Bingham. When the Bingham school closed, he went to Ramsey and taught the first three grades, and he loved it.”
She remembers the earlier days in Ramsey when there was a big hardware store, and Bill Stoddard’s grocery store.
She said that back then, “women never wore slacks,” but admits that she likes wearing her slacks now. “I still have dresses, but I’m content in my pants now,” she said, smiling.
She lost her husband 24 years ago. She has three children: Sandra Butler, Janice Jones and Denise Schnarre.
“When the children were grown and gone, I went to work for the Ramsey bank, and worked there for 17 years,” she said.
She has been a teacher, housewife, mother and bank employee, and she always made clothes for the children and herself. She always had a big garden and “canned a lot.”
She belonged to the Ramsey Ben Hur Book Club and is still an honorary member.
“Mary Stokes, Mary Timmins and Arlene Rosenberger are still members,” she said. The rest have all passed away.” She was also a member of Home Extension.
She took care of her mother, who was ill, for 17 years, bringing her to live with her the last three years of her mother’s life.
Today
She enjoys her family and has many photographs in her living room.
“I try to keep up with my grandchildren and great-grandchildren. They are all scattered around” she said.
Two children live in Alabama, and one grandson, Bryon, teaches at St. Louis University, following in the footsteps of his grandmother and his mother, Janice, who taught for 35 years. Her oldest son-in-law died last August.
She still loves to read, averaging about a book a week.
One of the things she likes best is going to church at St. Matthew Lutheran Church in Fillmore once in a while. ‘My daughter and son-in-law are good about taking me,” she said.
Her appearance is neat and attractive and belies her age of 95 years, as does her alert manner, sharp memory, smile and conversation.
Another of the “notable” former Ramsey residents, she is perhaps not so well known perhaps, but just very interesting, gracious and pleasant.
Verda Sorbus was a “pioneer” in the history of Ramsey, and hopes to be able to attend the 150th celebration this Saturday, beginning at 10 a.m. with a parade. 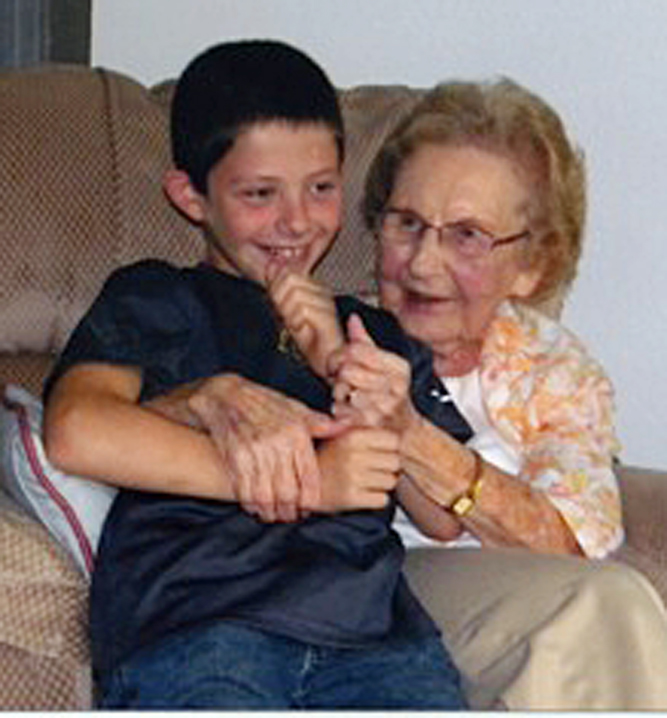 Verda Sorbus enjoys one of her childhood games, Thumb Stock, with a great-grandson, Braden Schnarre.