TEUTOPOLIS – Sometimes, Sarah Bigelow lets the moment engulf her when she’s standing at the service line.

But in what was thus far Vandalia’s biggest game of the season, she looked calm, cool and collected.

Taking over the serve with a 16-12 lead in the second set of Saturday’s regional semifinal against St. Elmo,

Bigelow served six aces in nine points to close out the match and give the Vandalia eighth-graders a spot in the regional title game.

“She has that potential,” said coach Geri Reuss. “Sometimes, she gets too much adrenaline going to be consistent, but this time, she proved that she can do it.”

Those serves were the first of the game for Bigelow, who finished off a 25-21, 25-12 win in the semifinals of the Teutopolis Regional.

The tournament concludes on Thursday, with the top-seeded Jr. Lady Vandals taking on No. 2 Cumberland at 6 p.m. The winner advances to next Monday’s sectional game at Cumberland.

“We just have to play our game,” Reuss said. “It doesn’t matter who is out there, because if we serve and pass, our hitting game will come.”

Those elements each looked shaky in the first set against St. Elmo.

Vandalia (15-5) hadn’t played a game since Feb. 19 due to two cancellations and a scheduled week off prior to the regional tournament.

In the first 30 points of the set, the Jr. Lady Vandals committed 11 errors to allow St. Elmo to keep the set tied at 15.

“We practiced pretty well the past week,” Reuss said. “That’s always a concern, because we always get that week off, but we have been trying some different things in practice, so hopefully it’s paying off.”

She added that nerves also likely played a role in the sluggish start, but once Emma Meyer took over the serve, she provided the spark Vandalia needed.

Meyer served five aces in eight points, and Molly Kern added two of her four kills in that same stretch to allow the Jr. Lady Vandals to open up a 22-15 lead.

“We had to get more than just two points in a row,” Reuss said. “(When we did) that relaxed everybody, and got us in a rhythm.”

St. Elmo would rally on the strength of Elissa Baron’s serving, as she posted two of her four aces after Meyer, but Vandalia would get points off of three Jr. Lady Eagle errors to end the set.

Meyer had three more aces at the beginning of the second set to give Vandalia a 9-3 lead, and though St. Elmo would then score four straight points, strong hitting from the Jr. Lady Vandals would put them right back ahead.

Macye Sarchet had two of her team-high five kills following a kill from Kern to move the lead back to five.

The attack game was slow to develop for Vandalia, with just five of the team’s 16 kills coming in the first 30 points of the first set, but kills became a big factor in the second set.

St. Elmo would cut the lead to two once again, but back-to-back kills for Sarchet would give Vandalia 17-12 lead before putting Bigelow at the service line.

The victory was the eighth straight for Vandalia, and only two of those matches have gone to three sets.

“They realized that they could come together as a team,” Reuss said. “I’m not sure when it happened, but somewhere halfway through our season, we started to put it together.” 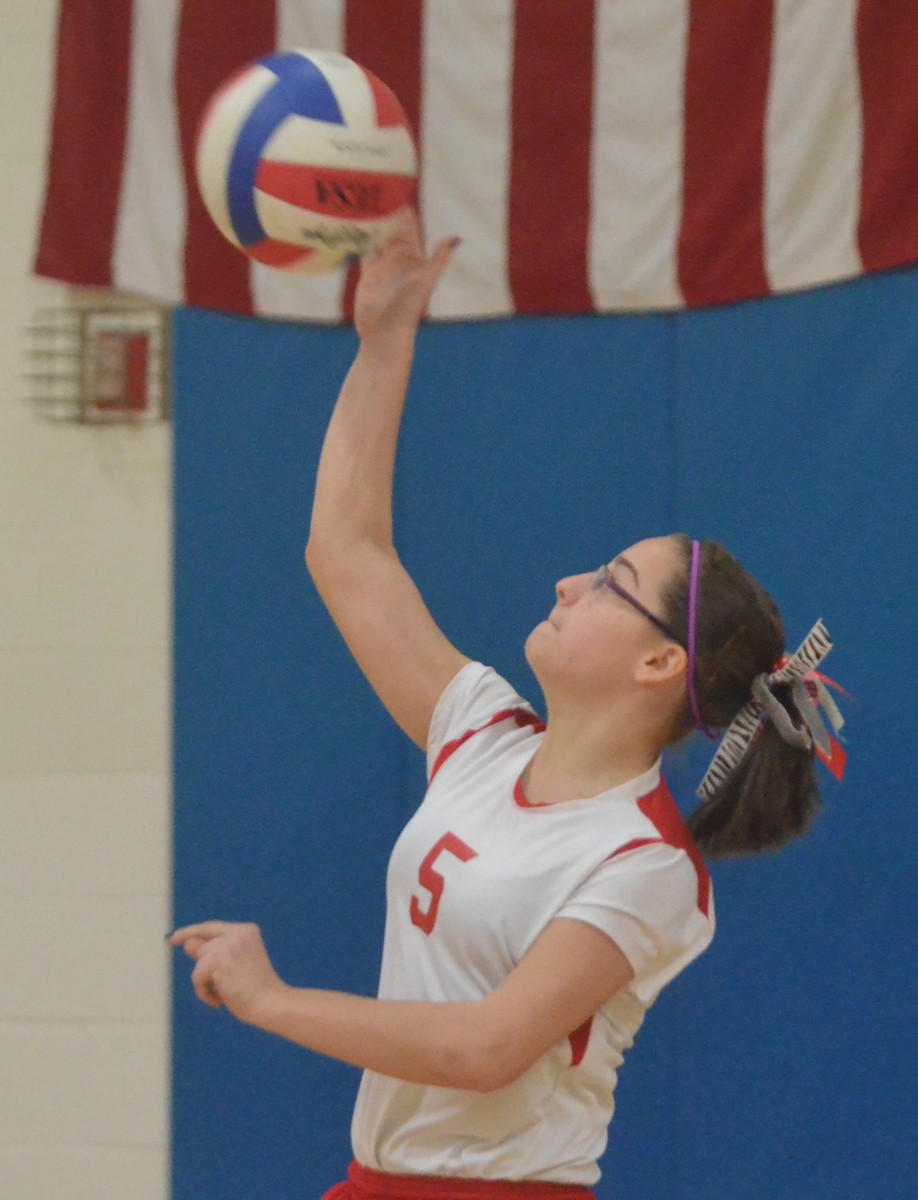 Vandalia eighth-grader Sarah Bigelow serves one of her nine straight points to close out the regional win against St. Elmo on Saturday. 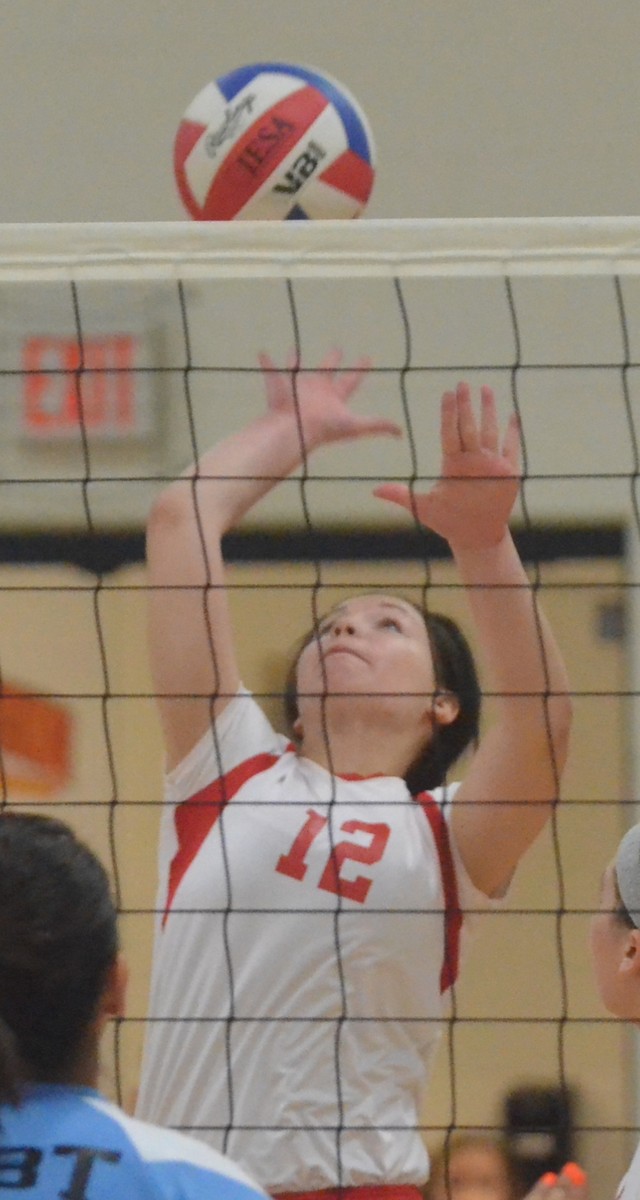 Vandalia eighth-grader Macye Sarchet attacks the ball against St. Elmo on Saturday at the regional tournament. 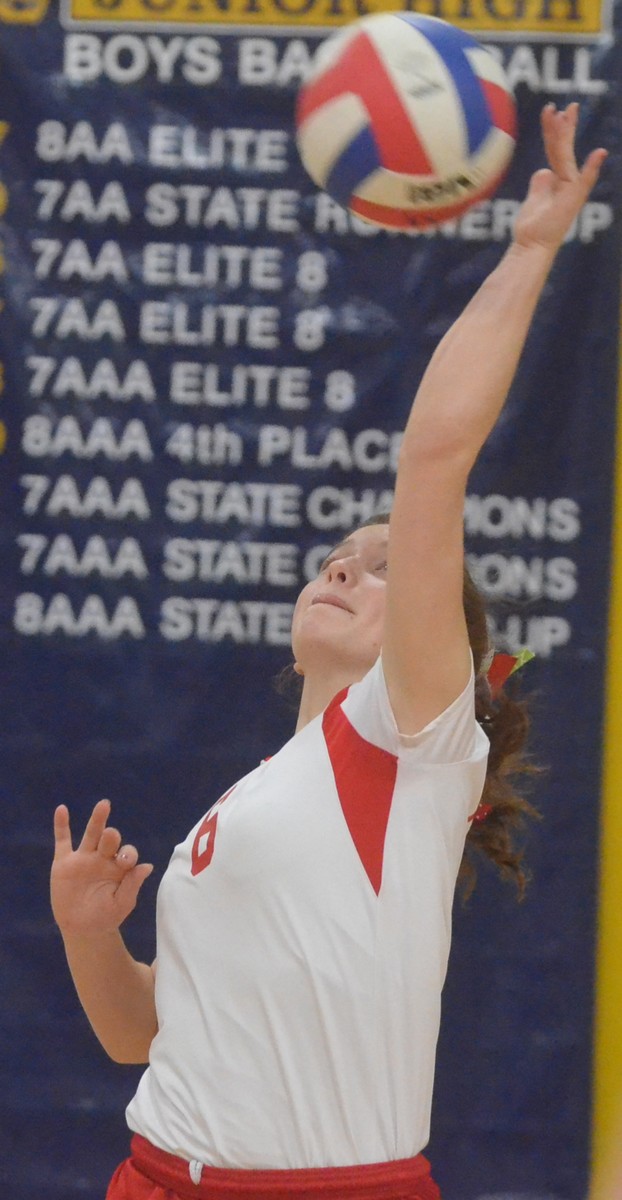