VANDALIA – After losing to Pinckneyville on Saturday in what may have been the worst performance of the season, first-year boys basketball coach Brian Buscher gave the Vandals a homework assignment.

Players were required to write down 10 reasons why they play basketball, and at Monday’s practice, they worked together to learn each other’s answers and set new team goals.

It’s too soon to know if the exercise will be a season-changing experience for Vandalia, but if the first game is any indication, the second half will bring plenty of excitement.

The Vandals got 17 points and 10 rebounds from senior Michael Wells, and the offense ran as efficiently as it has all season in a 58-36 win against Altamont in a rematch of a Vandalia Holiday Tournament game.

“Our kids played as a team, and bought into our offensive plan,” Buscher said. “We weren’t perfect at it, but we moved the ball, and the (defensive) pressure didn’t bother us.

“It may have been our best offensively-run night of the year.”

Many expected the game to be close after the 37-34 Vandalia win in the VHT, but six players scored in the first half as the Vandals (10-6) posted 12 points in each quarter for a 24-16 halftime lead.

Senior Leyton Godoyo made a layup on the first two possessions of the second half, and with 6:12 left in that period, the Vandals completed a six-point possession to shift an eight-point lead to a 14-point margin in 34 seconds.

“That was huge,” Buscher said. “That helped us be a little more relaxed.”

Senior Tim Ritchey was fouled while shooting, and after he made his first free throw, a technical foul was assessed to Altamont coach John Niebrugge.

Ritchey made all four free throws, and senior Aaron Harter made a jumper to complete the possession, which was the start of a 9-0 run and was part of a 26-point period.

That tied Vandalia’s best single-quarter output for the season, with the team also scoring 26 in the fourth quarter at Carlyle on Dec. 18.

Vandalia made it happen by turning over the ball just twice in the period and going 10-of-12 from the field and 6-of-7 from the free-throw line.

For the game, Vandalia only had 11 turnovers and shot 60.5 percent from the field, while making 12-of-17 free throws.

Harter had 11 points, and Godoyo and Ritchey each had eight. Sophomore Collin Nesterload made a pair of free throws in the fourth quarter for his first career varsity points.

Defensively, the Vandals had another strong game, holding an opponent to less than 40 points for the fifth time this season.

Altamont standout Garrett Ziegler had 15 points, but was held to just five points in the second half, as Ritchey and senior Wade Cowger teamed up to stifle him throughout the game.

“The person who stepped up and played above what I expected was Wade Cowger,” Buscher said. “He did what I wanted defensively, and handled the ball well and was patient.”

Vandalia gets back to the hardwood on Friday, hosting Greenville.

Despite having very few wins or established playmakers, Buscher said the Comets’ youth and athletic ability make them a dangerous team that should be improving every game of the season.

And with the intense rivalry between the schools, which was heated to a boil this fall after a late hit during football caused a season-ending injury to Ritchey, Buscher knows anything can happen.

“We have to play with class, and make it a good clean game,” he said. “Both teams want that.”

VANDALIA – After Saturday’s loss to Pinckneyville, first-year coach Brian Buscher said that it’s time for his team to start playing better as a unit and begin an upswing.

“I think we’ve hit one of them right now, as far as a low point (in the season),” Buscher said after Pinckneyville’s 56-52 victory. “We’ll go back to work on Monday and get back up.”

Halfway through the season, the Vandals are at 9-6, and have had trouble maintaining offensive possession of the ball, turning it over at least 18 times in three of the past four games.

The 18 turnovers committed against the Panthers led to 17 Pinckneyville points, including eight in the second period when a one-point Vandalia lead became a five-point halftime deficit.

“Eighteen of those turnovers were not forced by the other team,” Buscher said. “We have to find ways to play better as a team.”

Senior Michael Wells had another strong game, posting a team-high 15 points and seven rebounds. He has had at least a share of the team lead in rebounding in five straight games.

Those four combined to score all 24 of Vandalia’s fourth-quarter points, but the defense was unable to get enough consecutive stops to erase the four-point deficit it faced heading into the final eight minutes.

“Our kids played hard toward the end, but we can’t keep putting ourselves in that situation,” Buscher said. “We can only battle so much and work so hard to come back.

“But that’s been our mode of operation.”

Vandalia trailed by as many as seven points in the second half and never held a tie after the game was knotted at 26 midway through the third quarter.

Five times in the final 3:06 of the game, the Vandals got back within three points, but each time, Pinckneyville scored on its next possession.

The Panthers racked up their points exclusively on layups and free throws, and Buscher said that happened because his team did not play fundamental defense in the paint.

“We got stuck behind the post all night,” he said. “We didn’t box out as a team, and our defensive rotation was terrible.”

The Panthers grabbed seven offensive rebounds, turning three of them into six points.

“We did not play well as a team tonight,” Buscher said. “I’m not sure the last time we played well as a team, and what (players) don’t realize is that that is what is fun and what they will remember.

“We, as coaches, understood that Pinckneyville has a great tradition,” he said. “All our kids needed to know was that they are a solid club, and if we didn’t play well, they’d beat us.” 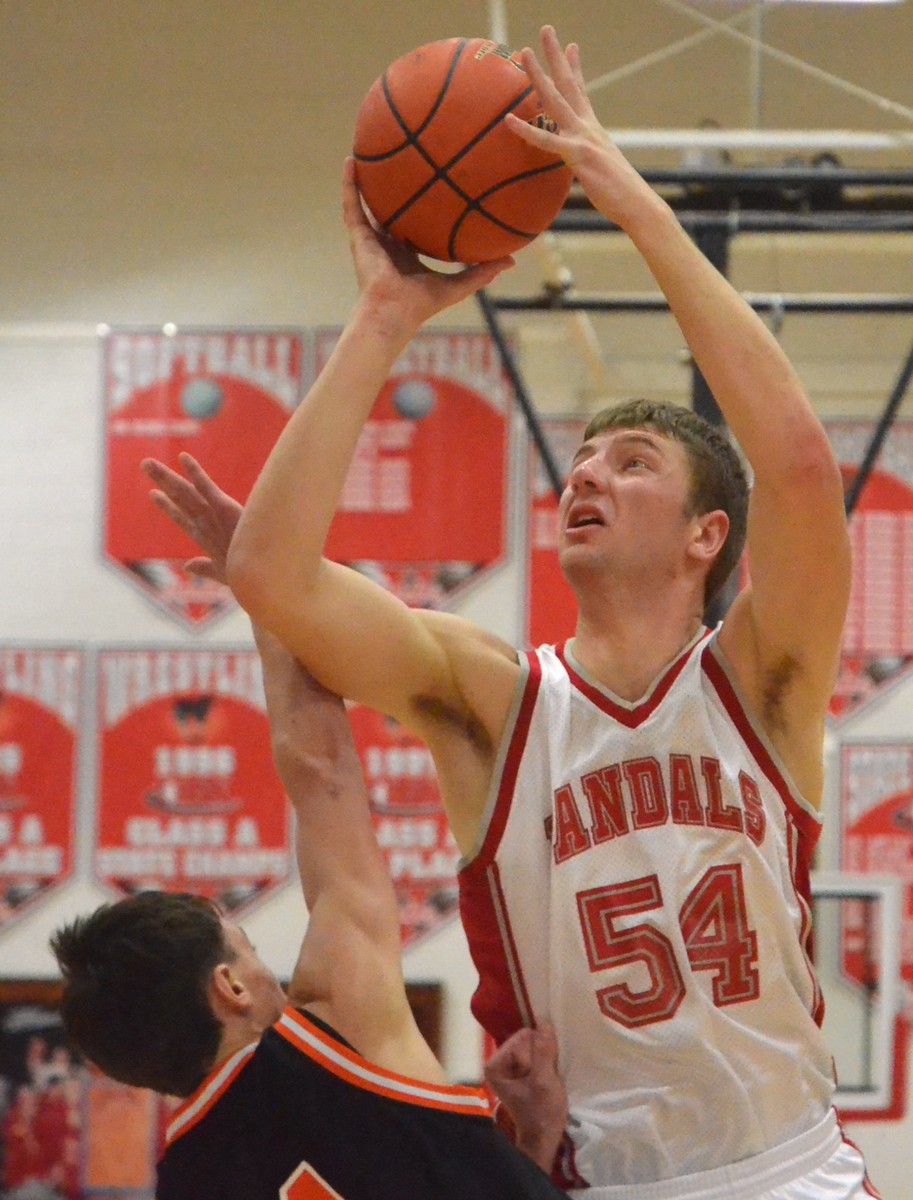 Vandalia senior Chase Woolsey secures two of his points on a layup during a 58-36 win against Altamont on Tuesday.