BROWNSTOWN – After watching their big lead evaporate through the middle two quarters, the Bombers made sure they played a strong fourth quarter to get their first Egyptian-Illini Conference win of the season.

Leading by just one entering the final period of last Friday’s game against Cowden-Herrick, Brownstown (8-6, 1-0 EIC) played well in the last four minutes to secure a 70-63 victory.

“Our guys came in and decided to work over Christmas break,” said coach Vince Rohr. “That came out and translated tonight.

“Our goal is to finish in the top three of the EIC, so we’ll have to compete every night like we did tonight.”

That late stretch was highlighted by a three-point play from junior Jacob Behrends with 3:28 left in the game, when he snared an offensive rebound and drew the foul on his layup to put the Bombers ahead, 63-56.

“He came crashing in hard with a purpose, got a step on the guy and out-jumped him,” Rohr said.

Cowden-Herrick wouldn’t be denied a shot at coming back, however, cutting Brownstown’s lead to just two points after Luke Moore scored on three straight possessions.

He had 38 points to lead all scorers and put in the 1,000th point of his career during the game.

“Luke Moore is a player. When you think of a player in this area, he is near the top,” Rohr said. “He can dribble, shoot and rebound, and is a great passer, which is something he doesn’t get a lot of credit for.”

In the final 1:06, senior Matt Sefton, who led the Bombers with 22 points, made four throws, and sophomore Curt Frailey added a layup to seal the victory.

Those two points were the final of his career-high 12 in the game.

Brownstown opened the game with a 26-point first quarter, which included four 3-pointers. In the past two games, it has made 17 long-range shots.

But with the Bombers scoring just 25 points in the two middle quarters, Cowden-Herrick was able to cut down its 26-10 first-quarter deficit to just one, at 51-50.

“We played with great intensity out of the gate, but Cowden definitely came back on us,” Rohr said. “We did get ourselves back on track to finish the game with some discipline.” 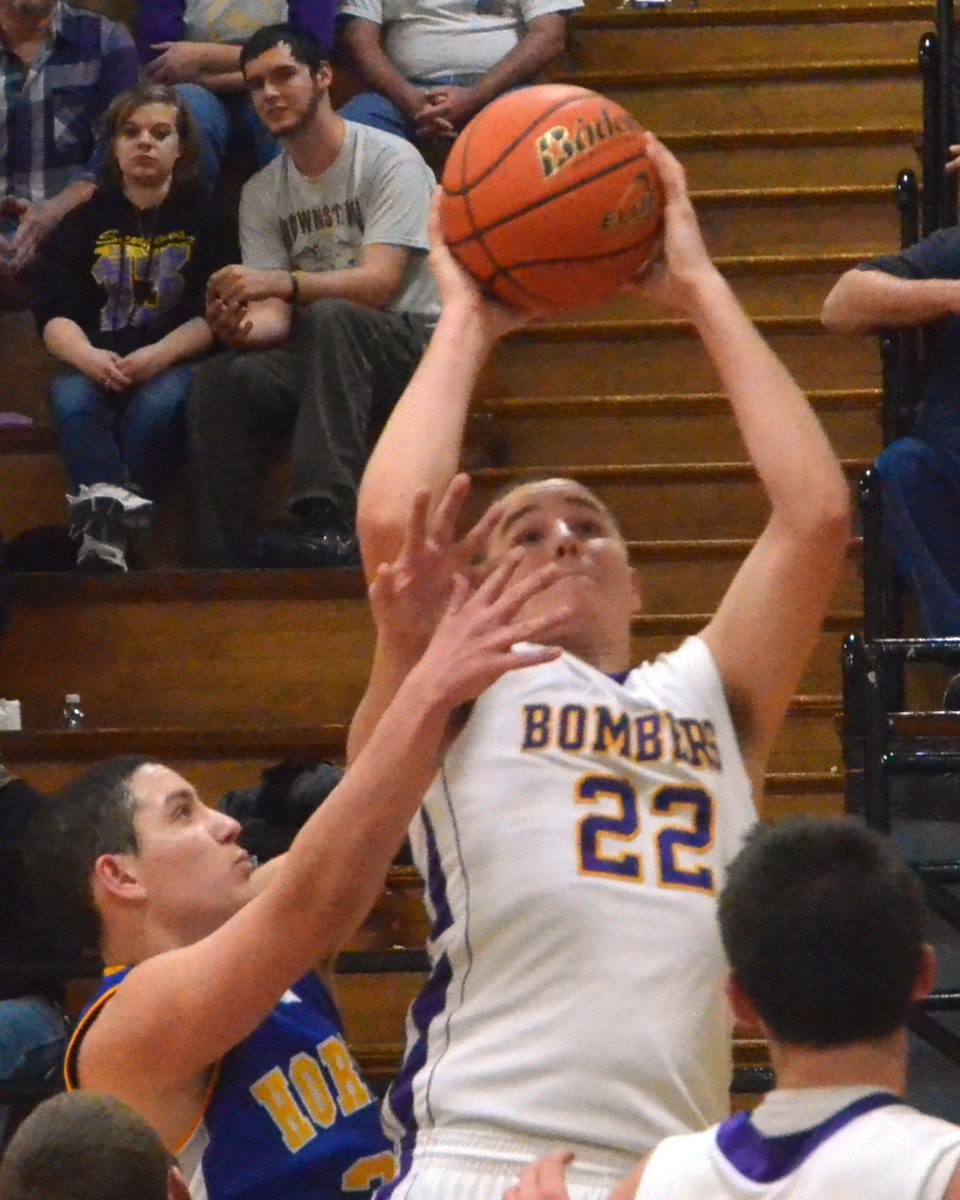 Brownstown junior Jacob Behrends goes up for what would prove to be a game-changing second-chance layup last Friday during a 70-63 win against Cowden-Herrick.