Santa and Mrs. Santa Claus’s pre-Christmas headquarters appear to be at the home of Al and Suzanne Schumacher, for Mrs. Claus graciously answered the door and appeared very comfortable and at ease in the Schumacher home.

She had just finished trimming the Christmas tree and she was preparing for a personal appearance that she and Santa were making before heading back to the workshop to help the elves load the gifts on Santa’s sleigh.
Meet Mrs. Claus and Santa’s Helper
Suzanne Schumacher has been Santa’s “dressed-up” helper now for about 10 years. But, as she explained, “Santa (Al) has really been needing my help since the 70’s.
“When we moved here, he began getting requests to make appearances,” she said. “He would borrow a suit, and sometimes all of the suit wouldn’t be there."
So, about 10 years ago, Santa decided he needed to buy a new suit. He went online, and as he was ordering a new Santa suit, he saw a “Mrs. Santa Claus” suit and asked his wife if she would like a new dress.
Suzanne agreed that would be a lot of fun to accompany Santa and be his helper. So, she has been Santa’s (favorite) helper now for 10 years … and loves every minute of it.
She looks very much the part, with her friendly smile and twinkling eyes.
“And I have a “grandma face," she said. “Sometimes, the little children are afraid to go to Santa Claus, but they will come to me, because I have a grandma face.
“I always say, 'I’m just an old grandma, so come to me,'" she said.
She had not appeared in the nearby areas in the past, “because Rowena (Biellier) was “Mrs. Claus," she said. “Now, it is to the point that when people call for Santa, I will say, do you want just Santa, and he will motion to me, he wants me to go, too.
“He said that we got these (suits) together, we are going to do this together and it makes me feel good, but the kids come to see him.”
“It is so funny,” she said. “The kids will have been working themselves up all day to see Santa. Their eyes will get so big and they light up, and some of them will come running and just nestle in. Others will stiffen up.
“They are just a joy. I always keep things they give me. Some will color a picture for Santa and write letters to Santa, and I keep it all,” She said.
“Even this year, one little girl gave us a feather, and I will keep it. When we retire the suits, I plan to make a scrapbook.”
Busy Time of the Year for Santa’s Helpers
Besides overseeing the elves in Santa’s Workshop, Santa and Mrs. Claus visit homes, businesses, etc. As Santa’s helper, she does extra little things to entertain the children.
“One year I bagged up “reindeer food” (oatmeal),” she said. “I told them that reindeers get hungry, too. Will you feed the reindeer?  Of course, they say, ‘Oh, yes,’ so I gave them a bog of reindeer food and told them to just sprinkle it on the grass. “
The places they go usually already have coloring books, candy canes, etc., something they provide.
She said that they have opened up Greenville’s Christmas season for years. “Greenville brings in a trolley,” she said. “It picks us up and takes us to the town square and Santa lights up the tree. Then we go over to greet and talk to the children.”
The gifts requests have changed a lot over the years.
“But this year, one little girl asked for a baby doll and a little boy asked for a rocking horse,” she said.
“It was refreshing to hear the simple gifts of some years ago being requested again. How nice that was to hear requests for the old fashioned toys again,” she said.
As Santa’s Helper
Mrs. Claus said that, as a rule, she doesn’t go with Santa on Christmas Eve. “The elves go to help, and I stay home to have hot cocoa and cookies ready for Santa Claus and the elves when the sleigh is empty and Santa comes back home.
“He is beat when he gets home, so I want to be there for him, have a fire going in the fireplace, help him get his boots off and get him comfortable.
“Of course, Santa also enjoys the milk and cookies left for him by the boys and girls,” she said.
“I bake cookies, and the elves are so busy at this time that they need cookies and milk and sometimes, chocolate milk.” Mrs. Claus said.
“Santa and I always ask the kids, do you help out at home and help mom clean your room? Are you helpful around the house?
“Be obedient to your mom and dad, and help out, and Santa will see you Christmas Eve.” 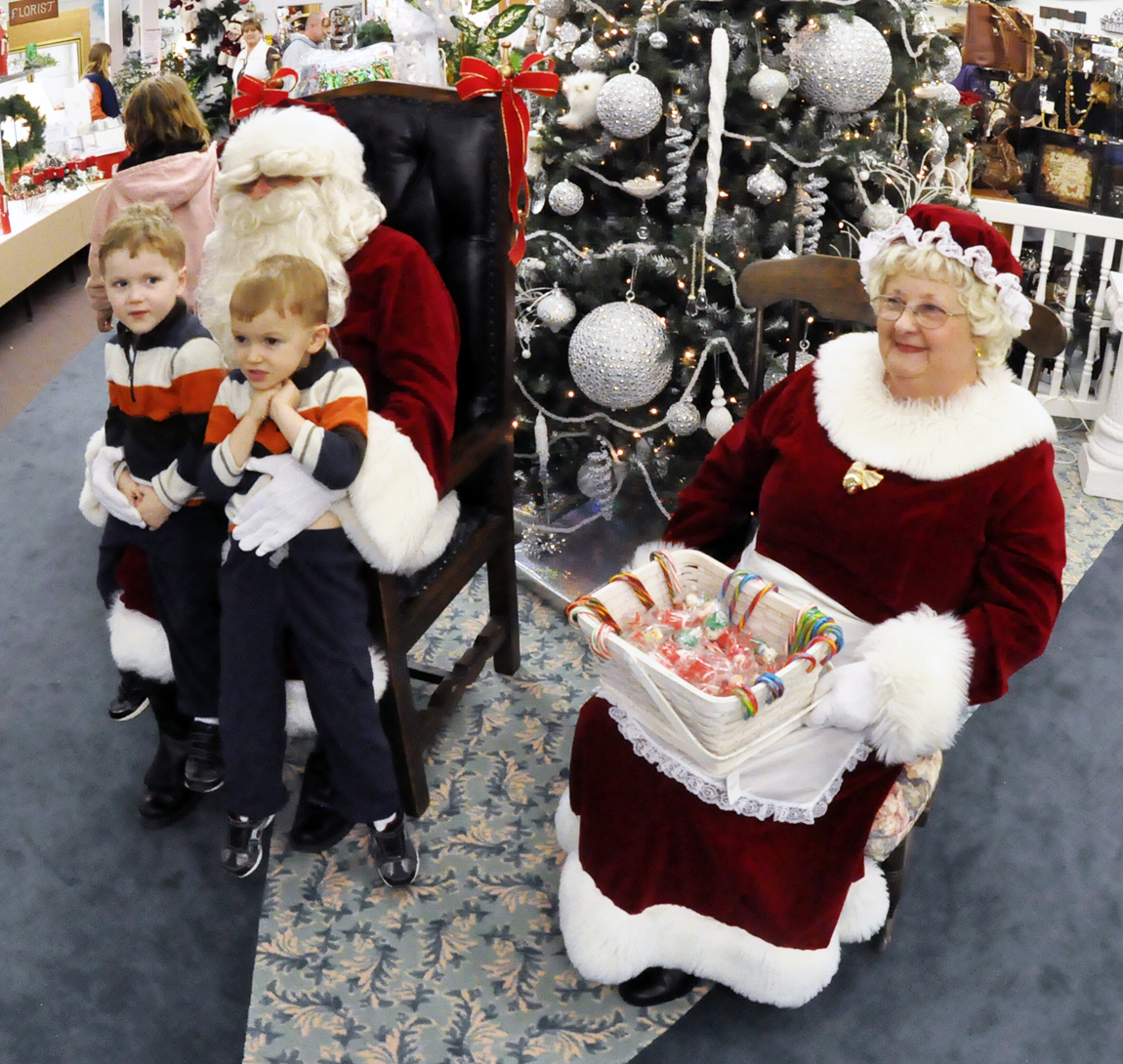