ST. ELMO – He dazzled a packed gym with his scoring, driving to the hoop to get his first several points and later showing off his brilliant outside shot for even more.

It sure was a night to remember for St. Elmo’s Levi Maxey.

Scoring a career-high 33 points in the championship game of the St. Elmo Holiday Tournament, the shifty junior guard propelled the Eagles to a 69-62 win against Altamont, capping off an outstanding individual tournament which earned him the Most Valuable Player trophy.

“I didn’t think I would do this good,” he said. “I did my same routine before the game.”

That same routine has been working well for the first-year starter, who leads the Eagles in scoring with 19.13 points per game and had 76 points in the three-game tournament.

Coach Greg Feezel said he opted to run a set play for Maxey on the Eagles’ first possession of the game, resulting in a layup 40 seconds into the game.

Little did Feezel know, that set was the start of the best night of Maxey’s career.

He made his first of four 3-pointers late in the first period and set the tone for the second quarter with a trey just 20 seconds into that period.

Maxey went on to score 11 more points in that quarter to get to 23 by halftime, and senior teammate Connor Beasley said that he knew it was just a matter of time before Maxey had a game like that.

“I told him at the start of the year that there’s not another guard around here who can stop you,” Beasley said. “He showed that tonight, stepping up and taking over the game.”

Maxey did airball a 3-pointer in the second half, and every time he touched the ball after that, Altamont’s student section would chant, “Airball, airball, airball.”

Maxey acknowledged that he could hear the chants, but he said it was a good feeling to silence those students by making free throws in the fourth quarter.

He picked up a pair of fouls in the first half, but that didn’t slow him down, as he continued to pursue layups for the rest of the game, though Altamont’s defense did cut off his scoring lane many times in the second half.

But instead of forcing shots, Maxey began to distribute the ball to his teammates, allowing Beasley to score 14 second-half points, and that is something that makes Feezel glad that Maxey still has one more year of high school.

“We have a lot of talks,” Feezel said. “The point guard and the head coach better be on the same page. We have to think alike.

“He is thinking like I want now,” he said. “He did everything I needed him to do, he guarded the way I needed him to and he took the ball to the hole when they pressured him.” 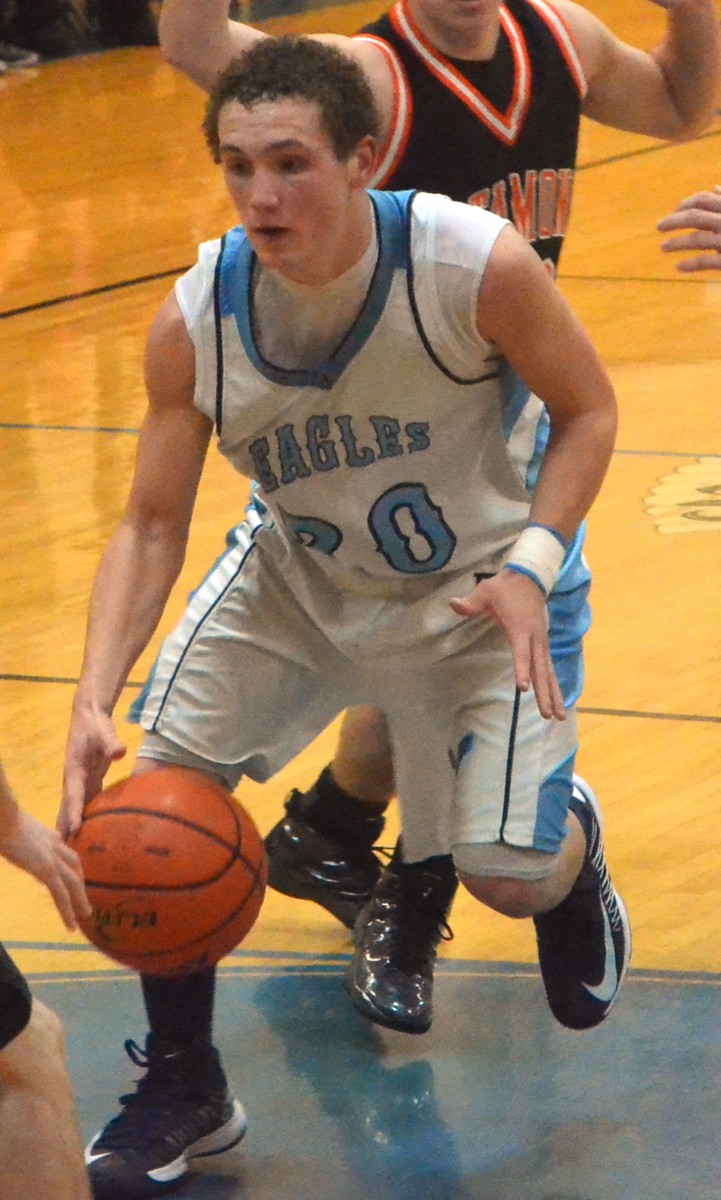 St. Elmo Holiday Tournament MVP Levi Maxey drives to the basket during the championship game of the event. His career-high 33 points in that game led the Eagles to a 69-63 win against Altamont.