The Vandals started strong and never really slowed down in picking up their second conference win of the season on Tuesday night.

Scoring 19 points in the first quarter, Vandalia set the tone against South Central Conference rival Hillsboro during a 56-34 victory in the home-opener for the Vandals.

On paper, the game looked like an easy win for the Vandals, as the Hiltoppers came in with no wins on the season, but with the Hiltoppers employing sophomore Dylan Miller, one of the tallest players in the conference, first-year coach Brian Buscher knew there were some things to worry about.

“You never know with kids if they are thinking that they should win, and that always concerns me,” he said. “We didn’t talk a lot about Hillsboro, we just worried about ourselves.”

Miller helped slow down Vandalia’s three post players, who had been averaging more points per game than the four guards, and what resulted was one of the best-played games from those guards.

Senior Tim Ritchey had a team-high 14 points for the Vandals (5-2, 2-0 SCC), and senior Leyton Godoyo had his season-high of nine points.

Ritchey has averaged 15.25 points per game over the past four contests.

“He has been penetrating to get easy layups, and getting to the foul line,” Buscher said. “His penetration also creates opportunities for others.”

Ritchey has made 22-of-28 (.786) free throws in the same span, helping the Vandals get their team percentage above 60 percent.

After a slow start to the season, Godoyo has scored 15 points in the past two games.

His defense and rebounding has been strong throughout the season, and he has slowly been settling down on offense, allowing him more opportunities to score.

“He may have made one too many spins (at the end of some shots), but he is playing better,” Buscher said. “His points will come, and I know he’ll be alright.”

The guards dominated Vandalia’s scoring in the first quarter, as Ritchey had six points, Godoyo had four points and senior Aaron Harter made a free throws to help give the Vandals a 19-6 lead.

Vandalia scored seven points off of Hillsboro turnovers in that period, while not committing any turnovers of its own. For the game, the Vandals scored 26 points off of 27 Hillsboro miscues, a sign of the Hiltoppers’ youth.

Hillsboro was able to hang with Vandalia for the second and third periods, as Miller scored 12 of his game-high 17 points, but the Vandals still outscored the Toppers, 29-22, in those quarters.

“He’s only a sophomore, and has a nice touch on his shot,” Buscher said. “We didn’t do anything fancy defensively, but next year will be a different a story.”

Miller’s size inside limited senior Chase Woolsey to just 10 points, senior Michael Wells to six and junior Colton Woolsey to four. All of those totals are below those players’ scoring averages for the season.

But that’s why Buscher likes the variety of players he has. Just because the post players had been scoring in the first five games didn’t mean that the guards would force them to score against a tough defender.

“That is one of our strengths,” he said. “We don’t have one dominant person, we have seven guys who can score in the right opportunity.”

The Vandals had to rally on Saturday, scoring 21 points in the fourth quarter to secure a win at East Alton-Wood River.

For the second straight game, senior Tim Ritchey had a strong fourth quarter, scoring eight of his game-high 17 points in that period for the Vandals (4-2) in the 59-50 nonconference win.

Included in his total were three 3-pointers, and 6-of-8 free throws. He has made 15-of-18 free throws in the past two games, while scoring 37 points.

Seniors Leyton Godoyo and Aaron Harter, and junior Colton Woolsey each had six points to round out the scoring.

The game was close throughout the first half, with the Oilers holding a one-point lead at halftime, and that lead held up throughout the third period before the Vandals took off for the final eight minutes.

It was the second straight game that the Vandals scored 21 points in the last period.

Aaron Ragusa scored 17 points for East Alton-Wood River, and had two of the Oilers’ eight 3-pointers.

GILLESPIE – Four players set season-highs for scoring and the Vandals overcame a tough third quarter to sprint away with a 76-60 win in last Friday’s South Central Conference opener in Gillespie.

Senior Tim Ritchey had a team-high 20 points for the Vandals (3-2, 1-0 SCC), and seniors Chase Woolsey and Michael Wells each had a double-double.

Senior Aaron Harter had 14 points for his career-high.

Woolsey had a season-high 18 points and 12 rebounds, while Wells set his season standards of 16 and 10 in his first career double-double.

“They got a lot of easy buckets, with Tim coming off of the ball screens, but they had to fight for a lot of buckets, too,” said coach Brian Buscher

Both Ritchey and Wells had especially strong fourth quarters, rallying the team after Vandalia’s 17-point halftime lead had shrunk to as few as six points in the third period.

“Tim and Michael basically stepped up and said, ‘Give me the ball,’” Buscher said. “They went to the basket, even if there was two guys on them, and that got the rest of the team playing better.”

That also essentially reversed everything that happened in the third quarter, which saw Gillespie amp up its physicality, allowing the Miners to outscore the Vandals, 22-13.

Those 22 points were the most a team has scored in a quarter against Vandalia this season.

A second-chance jumper at the buzzer from Woolsey gave the Vandals a boost going into the final period, and they would outscore Gillespie 21-13 over the final eight minutes.

“We played really well in the first half,” Buscher said. “And we were physical all game, but Gillespie stepped it up in the third quarter, and that took us out of our element and got us frustrated.”

The Vandals led 42-25 at the break after Woolsey scored 10 of his points in the second period. The halftime total was the highest of the season for the team.

Buscher attributed his offense’s furious pace to the way the Miners chose to defend.

“Gillespie played us tight, and that allowed some lanes and screens to open up,” he said. “We had good spacing and good screens, so we had good offensive action the whole night.”

That offensive action led to a season-high 19 assists for the team, including four each for Ritchey, Harter and senior Leyton Godoyo.

Five times during the game, the Vandals had an assist on back-to-back plays, and Buscher has said all season that the key to the offense working is players finding an open teammate no matter where he is on the floor.

The fast pace did not lead to a lot of turnovers for the Vandals, who committed 18 for the game but just a combined10 in the first half and fourth quarter.

They turned over Gillespie 12 times in the first half and scored 14 points off of the miscues, but the Miners made up for it by grabbing 19 offensive rebounds, which led to 18 second-chance points. 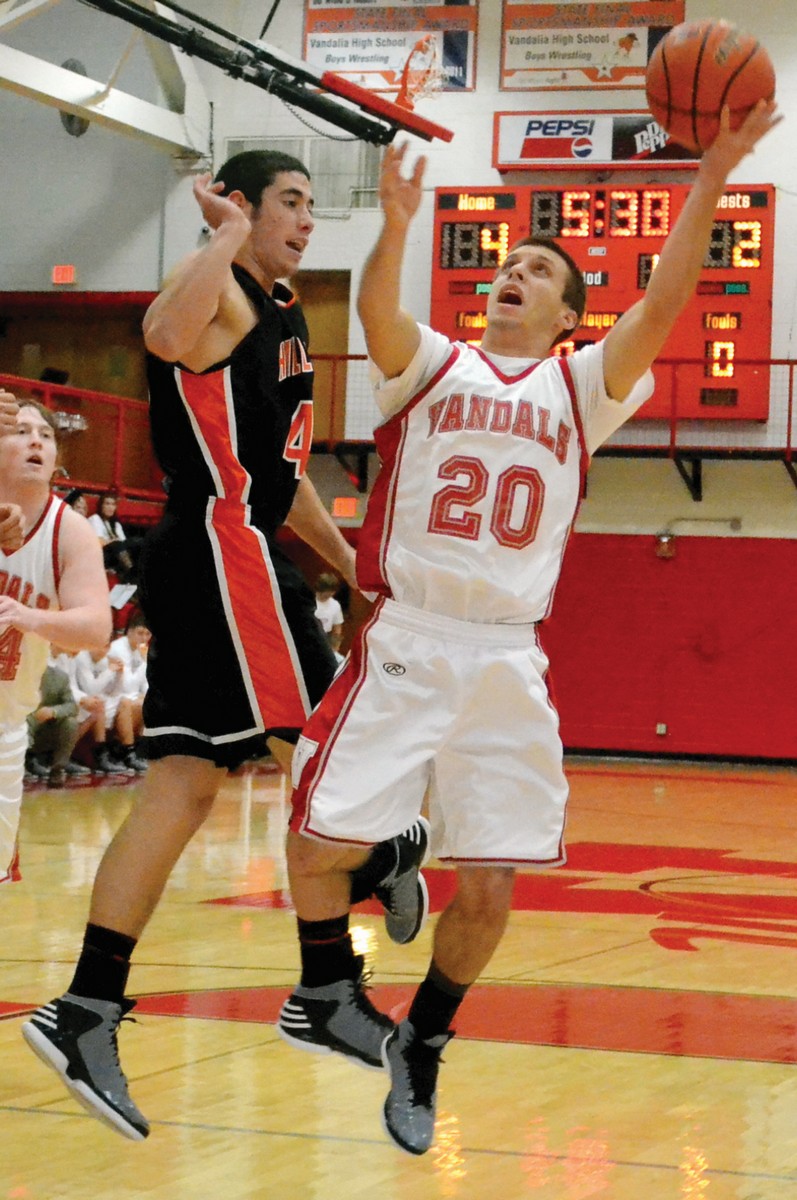 Vandalia senior Tim Ritchey puts in two of his team-high 14 points for the Vandals during Tuesday’s win against Hillsboro. 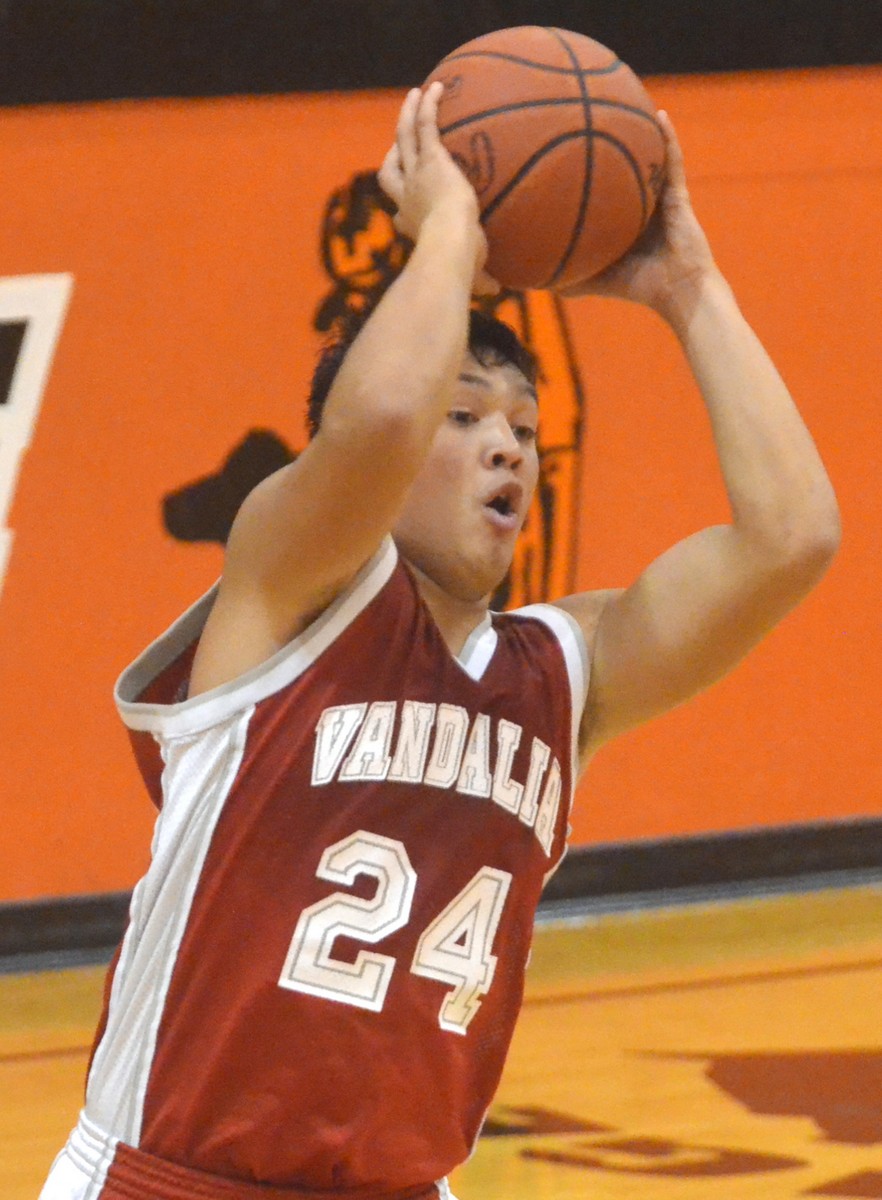 Vandalia senior Leyton Godoyo looks to pass at Gillespie during a 76-60 Vandalia in last Friday night.