Vandalia (2-2) will travel to Gillespie for the conference-opener, before hosting Hillsboro in a conference game next Tuesday. That will double as the team’s home-opener.

“It can’t get here soon enough,” said coach Brian Buscher of the SCC season. “If we keep improving our play and focus, we can be right there (in contention for a title).”

Gillespie is 0-1 in conference play after falling to Carlinville, 65-47.

Buscher was able to scout Gillespie toward the beginning of the season, and while no one player scares him, the Miners will present a challenge.

“They play hard,” he said. “I like that, and hopefully, our guys can match it.”

The varsity game will tipoff at about 7:30 p.m.

DUQUOIN – The Vandals picked a bad time to commit their first turnover of the fourth quarter in the final game of the DuQuoin Tip-Off Classic.

Facing the hosts on Saturday night, an errant pass gave DuQuoin possession with 6.4 seconds left in the game, and the Indians would make a pair of free throws before a desperation 3-pointer from the Vandals clanked off of the rim in a 56-53 loss.

“We need to keep working, and have to know our sets and how to execute them,” said coach Brian Buscher. “When we have to run a set play, we have to execute it.

“I think we had the right play on,” he said. “We just didn’t execute it, so we have to mentally make an adjustment.”

The Vandals had 17 seconds to convert the play, which with a field goal would have given them a 55-54 victory, assuming no further scoring.

“We didn’t have enough focus and will to get the job done,” Buscher said. “We don’t want to lose, but we don’t have enough in here (heart) to get it done right now, and that has to be so important that it hurts.

“They have it, but they need to find it,” he said. “That’s why tournaments at the beginning of the year are good, because you can find problems and figure out how to solve them.”

Vandalia came into the fourth quarter leading DuQuoin by one after the Indians made a jumper with just 0.2 seconds left in the period.

The Vandals had led for the majority of the first three quarters.

DuQuoin then took advantage of that momentum by scoring on seven straight fourth-quarter possessions to take a 54-45 lead with three minutes left in the game.

“We weren’t boxing out or executing on offense, and those things happen when you don’t do what you’re supposed to,” Buscher said. “We’ve put ourselves in some situations this year, and I’ll be the first one to take the blame.”

Vandalia showed some fight, however, as junior Colton Woolsey made a layup, senior Michael Wells converted a three-point play and senior Aaron Harter hit a 3-pointer over the next 2:14 to cut DuQuoin’s lead to just a point.

DuQuoin committed a turnover by stepping out of bounds in front of its own bench with 17 seconds left to set up Vandalia with what it expected to be the final possession.

Wells had the best game of his varsity career, scoring a season-high 14 points and pulling down nine rebounds.

There were several times early in the game when it appeared that Vandalia was going to take control, but each time, the Indians fought back to keep it a close game.

That was followed by a 7-1 push by Vandalia, but four DuQuoin points in the final 27 seconds of the half made the score 26-25. Neither team led by more than four points in the third quarter.

DUQUOIN – Senior Chase Woolsey had his first career double-double and the Vandals fended off the furious offensive pace of Cairo in the second game of the DuQuoin Tip-Off Classic.

Woolsey had 11 points and 11 rebounds in the 62-56 win last Friday, and coach Brian Buscher said that Vandalia did a good job of not playing at Cario’s frantic speed, even though it did cause the Vandals to commit 24 turnovers.

“Their game is fast, so we said before the game that we needed to play at our tempo,” Buscher said. “We play up-tempo, but we can’t play at their speed.”

Cairo scored 24 points off of Vandalia’s miscues, but because the Vandals were running such an efficient offense, those points didn’t matter in the end.

Of Vandalia’s 24 field goals, 19 came inside the paint on layups, and everyone who played had at least one assist.

“It was definitely a better game than the last one,” Buscher said. “We moved a lot better tonight, and got a lot of layups tonight.

“We have to (get assists) if we want to be good,” he said. “All seven guys have got to see the whole floor and find someone open.”

Woolsey led the team with four, all of which came in the first half.

“That’s the best game he has had all year,” Buscher said. “He was going to the rim and making strong post moves.

The Vandals (2-1) got several large leads in the game, but as the Pilots always seem to do, they used several runs to keep it interesting all the way to the final minutes.

Vandalia led 11-2 after just 2:40 of game play, scoring on six of its first seven possession, but Cairo outscored the Vandals 11-4 over the final 2:15 of the first quarter to cut the lead to six.

A second-chance shot with 3:01 left in the second quarter cut Vandalia’s lead to one, but the Vandals closed out the half on an 8-0 run to take a big lead and the momentum to halftime.

“It was huge, because the other night against Flora, we were down 21-20 at halftime, and I thought that we would come out strong, but we laid an egg,” Buscher said. “We went up at halftime tonight, and then we added to it in the second half.

“Those little runs have to be made somewhere.”

Cairo actually cut the lead down to six early in the third period, but an 8-2 run for the Vandals right after pushed the lead back to 12, It would grew to 16 by the end of quarter.

Vandalia would score just one point in the final five minutes of the game, allowing the Pilots to cut into the final margin.

Junior Colton Woolsey had a career-high 14 points to lead the Vandals in scoring for the second straight game.

Last Wednesday, the Vandals lost track of the game after a fast start against Flora.

Vandalia led by as many as 10 points in the first half, but faltered late in the second quarter and throughout the third quarter of a 50-43 victory for Flora.

The Vandals (1-1) led, 12-7, after the first period and increased that lead in the first half of the second quarter, but Flora closed the first half on a 10-0 run and then outscored Vandalia 29-23 over the final two periods.

The Vandals did attempt a comeback in the fourth quarter, but three straight missed shots late in the period allowed the Wolves to secure the win.

The two teams could meet again in the Vandalia Holiday Tournament later this month. 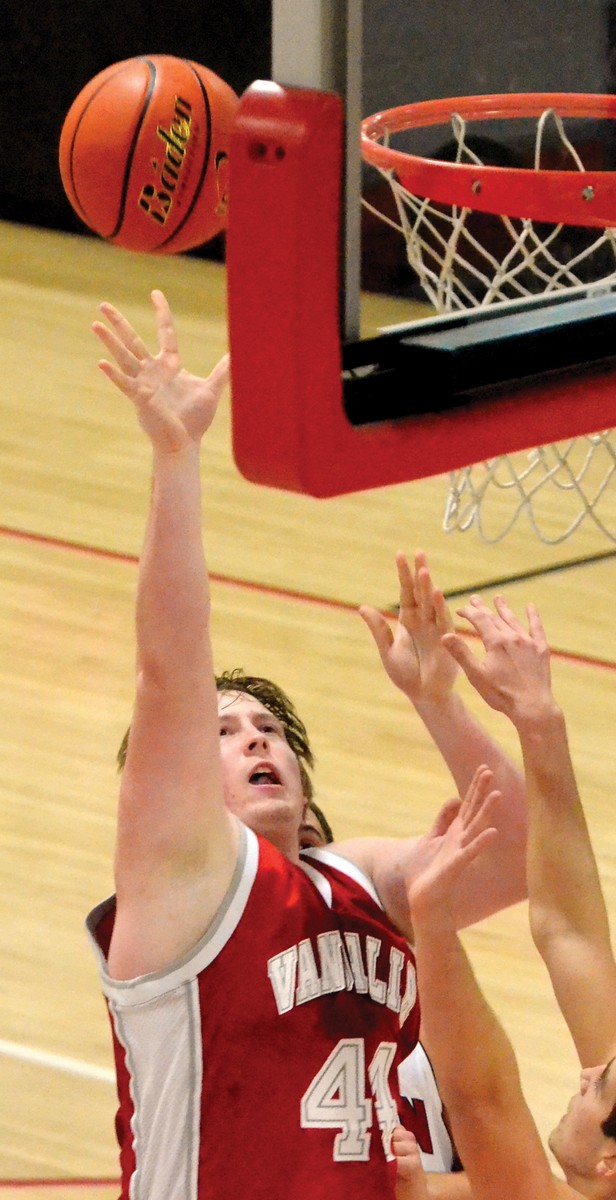 Vandalia senior Michael Wells lays in two of his team-high 14 points against DuQuoin on Saturday night. 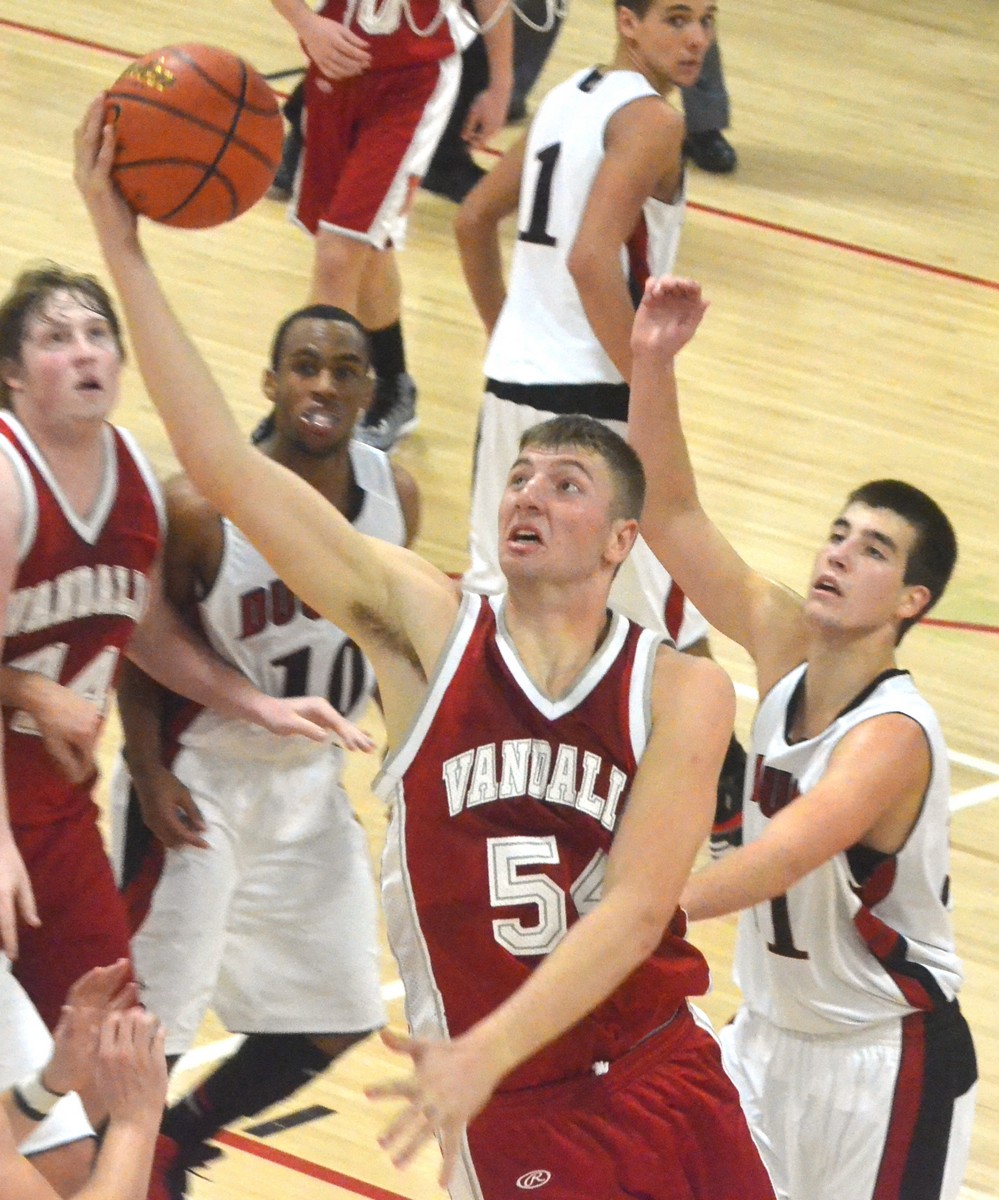 Vandalia senior Chase Woolsey makes a move toward the basket against DuQuoin at the Tip-Off Classic on Saturday.