DUQUOIN – Four Vandals were given tournament awards on Saturday following the conclusion of the DuQuoin Tip-Off Classic.

It is the second straight season that Vandalia has earned those same awards.

Chase Woolsey was strong in the paint for the Vandals, posting a double-double against Cairo in a 62-56 win last Friday, and he had eight points and seven rebounds against DuQuoin in Saturday’s 56-53 loss.

Ritchey was a consistent scorer, scoring eight, nine and 10 points in the three games of the tournament, while also being relied on to break through defensive pressure at the point guard position.

Colton Woolsey was also a strong threat in the post, scoring 13 points in last Wednesday’s 50-43 loss to Flora and 14 against Cairo.

But no one ever saw Godoyo complain about that scenario, and that helped him follow Dathan Berning, who won the same award last season.

“You wouldn’t get it if you were doing things wrong, or if your guys were playing like idiots,” Buscher said. “Sportsmanship is a big part of it, even if you lose.”

Senior Michael Wells arguably also should have been included on the All-Tournament team.

Wells led the Vandals in scoring with 11.7 points per game and added a season-high nine rebounds against DuQuoin.

Most of his damage was done in the final game of the tournament, however, when he also had a season-high for scoring, with 14 points. Votes were tabulated prior to the conclusion of that game.

“I thought Michael Wells played just as well as those guys,” Buscher said. “Not to take anything away from them, but he is playing great right now.”

At 9.75 points per game, he leads the Vandals in scoring for the season.

Vandalia picked up plenty of offensive rebounds and second-chance points in the final two games of the Tip-Off Classic.

“That is very good,” Buscher said. “We went and got some of those boards.”

More scoring opportunities are definitely out there for the Vandals this season.

Through four games, the three post players have dominated the scoring (26.25 points per game), when compared to the four guards (24.75 ppg).

“We’d like to have that guard game, but we have to do what we need to to win the ballgames,” Buscher said. “We do want to score from everywhere, though.”

The Vandals have made just nine 3-pointers on the season, and once those outside shots begin falling with more frequency, Vandalia’s offense ought to see a bump in its scoring average. 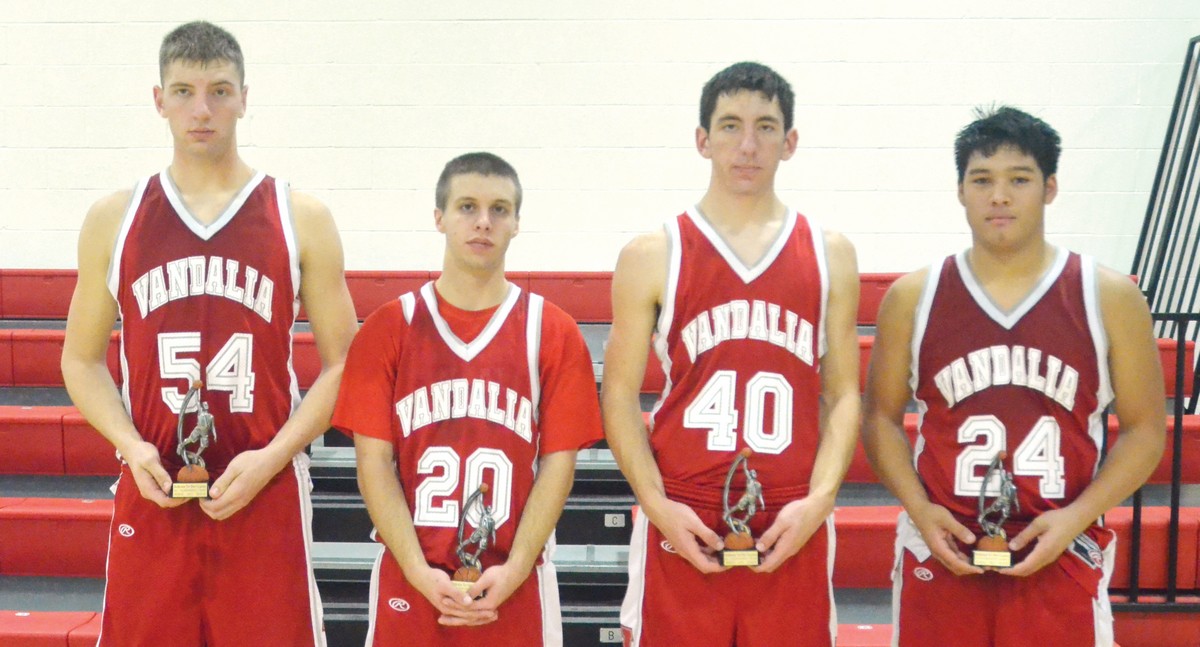 Four Vandalia players were honored for their play during the DuQuoin Tip-Off Classic, which concluded on Saturday. Senior Chase Woolsey (54), senior Tim Ritchey (20) and junior Colton Woolsey (40) were each named all-tournament. Senior Leyton Godoyo (24) was given the Sportsmanship Award.