The Vandalia City Council took action on Monday that supports a Midwestern chain’s acquisition of a local travel center.

The council approved re-assigning redevelopment and economic development agreements with South Central FS and Vandalia Green Energy to Road Ranger.
South Central FS Chief Operating Officer Byron Sikma said that the sale of the travel center to Road Ranger “is certainly an opportunity … for everyone.
“I think it’s a win-win (situation) for all parties, including the city. I can’t think of a downside with this," he said.
Road Ranger, a Rockford-based company founded in 1984, partners with Pilot Flying J for 34 travel centers in Illinois, Indiana, Iowa, Kentucky, Missouri and Wisconsin.
Sikma said that Road Ranger approached South Central FS several months ago about purchasing the local travel center, a facility in the northwest quadrant of the city’s western Interstate 70 interchange which was built by South Central FS in 2007.
He said that the sale closing is set for early next month.
Sikma said the sale of the travel center will help increase revenues, and, thus, benefit the city and the local economy, because major companies like Road Ranger have a significant advantage over independent travel centers like FS Travel Center.
He said that those major companies negotiate with truck-driving companies on fuel prices for its drivers. Independent centers, therefore, get much of their business from drivers not affiliated with companies.
“One of the challenges we had was being an independent in a major world,” Sikma told the council.
“Road Ranger approached us because they really like Vandalia and they like that site,” he said.
As South Central FS began the travel center project, the cooperative that now includes nine counties, entered into redevelopment and economic development agreements.
Those agreements provided FS with property tax abatements, sales tax rebates and reimbursement of Tax Increment Financing-eligible costs, with the maximum incentives totaling $2,208,000. The agreements state that the incentives cannot extend beyond Dec. 31, 2032.
Sikma said that FS has been paying down toward that amount, and he projects that “with the extra volume (of revenue) that this brand (Road Ranger) will bring,” that maximum figure will be reached many years before the 2032 deadline date.
“It’s certainly an opportunity for those agreements to mature sooner,” Sikma told the city council.
That means that the city would begin receiving additional sales tax and property tax monies from the business considerably sooner.
Also at Monday’s meeting:
• Mayor Rick Gottman and the council thanked Paul “Whitey” Willms for donating the tree used as the city’s Christmas tree.
• The council approved the appointment of Sean Cook to the city’s Zoning Board of Appeals. Cook fills the vacancy created by the resignation of Jerry Seaton.
• The council approved the appointment of Therese Tate to the Vandalia Tourism Commission. Tate fills the vacancy created by the resignation of John Dotray.
• The council voted to make an offer to the candidate recommended by its personnel, finance and insurance committee for a mechanic position at the city garage.
• The council approved the designation of a road on the north side of the western Interstate 70 interchange, at Pine Ridge Homes, as Pine Ridge Drive.
Gottman explained that the road had to be named for Enhanced 911 emergency phone service purposes.
• Gottman reported that CTC Logging is expanding its operations to a location to the west of Vandalia Correctional Center and adding 20-25 jobs.
• Gottman reported that local developer Dennis Grubaugh is renovating the former Jr. Food Mart property at the northeast corner of Kennedy Boulevard and Gallatin Street, with plans for a local restaurant to relocate to that location.
• The mayor reported that to comply with state laws, the city will now be displaying city council agendas at city hall in the former walk-up window on Gallatin Street.
• Gottman reported that the city will be moving the photos of past mayors from the former city hall, now the Public Safety Building, to the current city hall in the near future.
• Gottman reported that Alderman Mike Hobler had suffered a heart attack earlier in the day, and was doing well after a stent was put in. 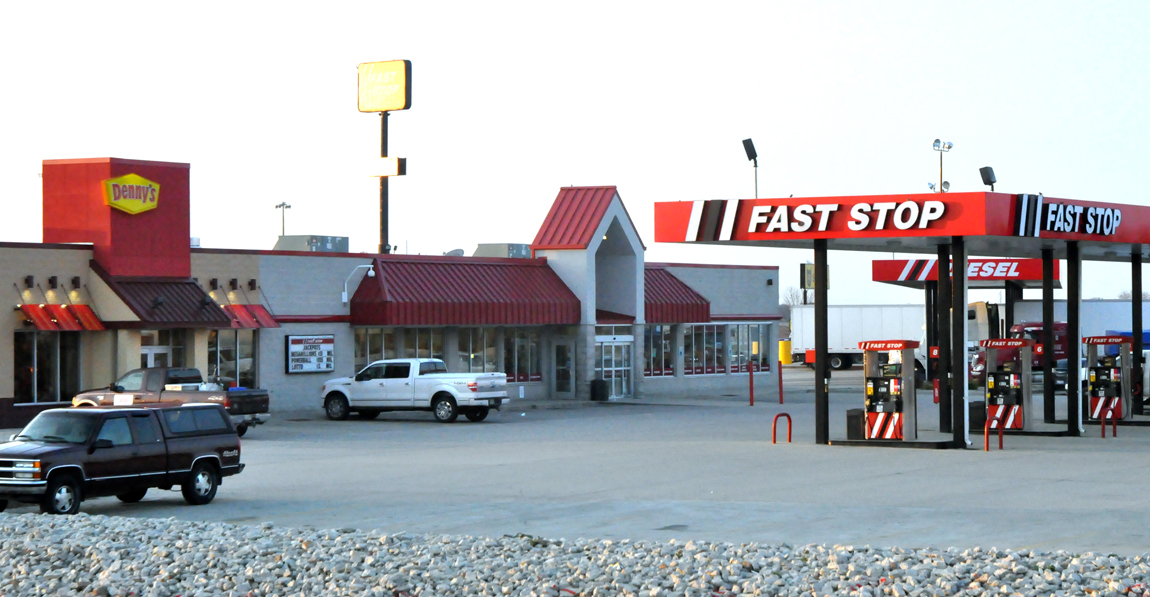