Even when she is in a bad mood, it doesn’t take much to make Austyn Krueger smile.

The easy-going senior who transferred to Vandalia as a sophomore not only keeps the team in positive spirits, she also has used an all-around game to help lead the Lady Vandals to one of the best seasons in school history.

Whether it is telling jokes during practice or dancing before the start of a game, Krueger always seems to be having fun.

And her coach has no problem with that.

“She’s a free-spirited kid,” said Allison Smith. “There’s never a moment when she doesn’t make someone crack a smile.”

But when it is a time to be serious, Krueger transforms, becoming a fierce competitor and one of the best players in the South Central Conference.

She led the Lady Vandals with 52 aces and was second in kills with 197 on the season. Those results have helped land her a spot on Millikin University’s volleyball team for the next four seasons.

The journey to now began up north for Krueger, as she played one season for Providence Catholic in New Lenox, a suburb of Chicago, prior to her family relocating back to Vandalia.

“The program was fine, but I was in a slump, since I started here with no friends,” Krueger said. “But now, I can’t imagine not ever meeting these girls.”

Krueger saw some spot-duty on varsity that season, and impressed with her JV play.

Smith said that she saw a difference in Krueger’s attitude as that year went on and she became more comfortable with her teammates.

“You never know what you are getting in a transfer,” Smith said. “I know the first month or two, she struggled, but after that, she started to cut loose a little bit and feel like she was being accepted here.”

As a junior, Krueger was bumped up to a varsity starting role and excelled, posting well over 100 kills and teaming up with RaeChelle Leiken and Sierah Ruffner in the front row to create plenty of excitement about their senior season.

All three of those players have taken big steps forward this season, with Krueger playing at a very heightened level, especially at the service line.

She acknowledged before the season started that her serving needed a lot of work, and during some games early in the season, she was subbed out when her turn at the line came around.

Through some dedicated work with coaches and a new approach, however, Krueger is now depended on as the team’s leading server.

“I’ve focused more on just getting it over and in instead of ace,” Krueger said. “The only time I try to go for an ace is when I know my serves are on that day.”

Her biggest serve of the season came on the deciding point against Pana on Oct. 18 in a game that clinched the South Central Conference championship.

From an attack standpoint, she had a season-high 14 kills against South Central in the final game of pool play in the Altamont Tournament on Sept. 1. That total remained the highest single-game tally for a player on the team this season.

And because she also plays strong defense in the back row and in the blocking game, Smith said it is impossible to pick one area of Krueger’s game that is most valuable.

“I can’t pick one, because she is such an all-around player,” Smith said. “She’s everything from defense to offense, she’s a captain on- and off-the-floor, and a leader academically and athletically.”

Krueger has had just one B in high school and maintains a 3.97 grade-point average,

She intends to study chemistry and psychology while at Milllikin. Colleges in several states have pursued her for academics.

There’s nothing easy-going about that education choice, but no one doubts she will do well because of how dedicated she has been in all of life’s pursuits.

“In this postseason, she has been on fire.”

During the regional tournament, she had eight kills in both games and added three service aces.

And she kept playing and dancing at the Cumberland Sectional on Tuesday, getting groovy before the game and then posting another stellar performance with a team-high 11 kills in a loss to Pana that ended Vandalia's season.

“That’s how I get pumped up,” Krueger said of her dancing. “That’s just how I roll, I guess.” 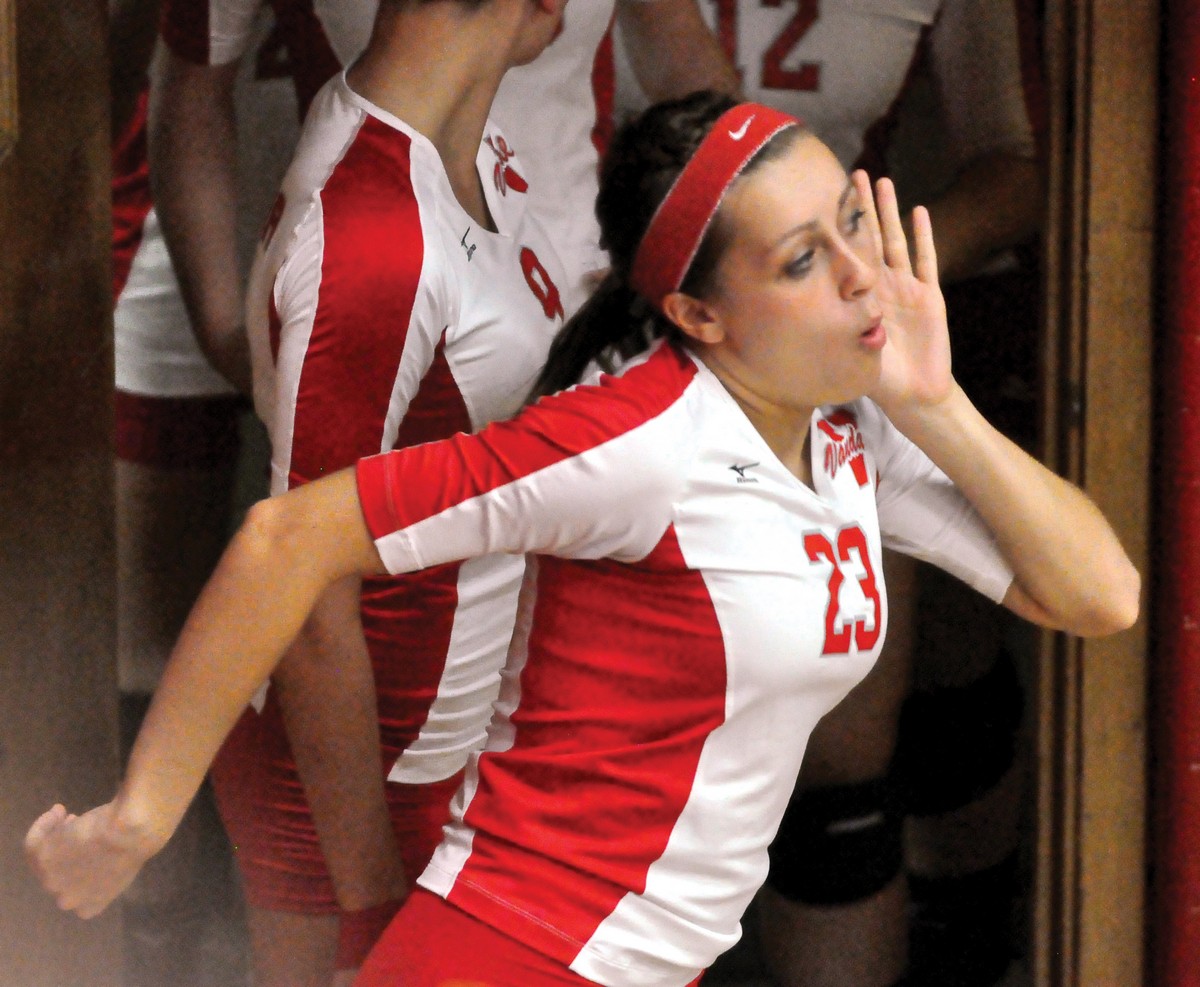 Vandalia senior Austyn Krueger dances prior to a home game this season. Her fun personality is one of the most important aspects of the team, but it doesn’t trump her on-court contributions. 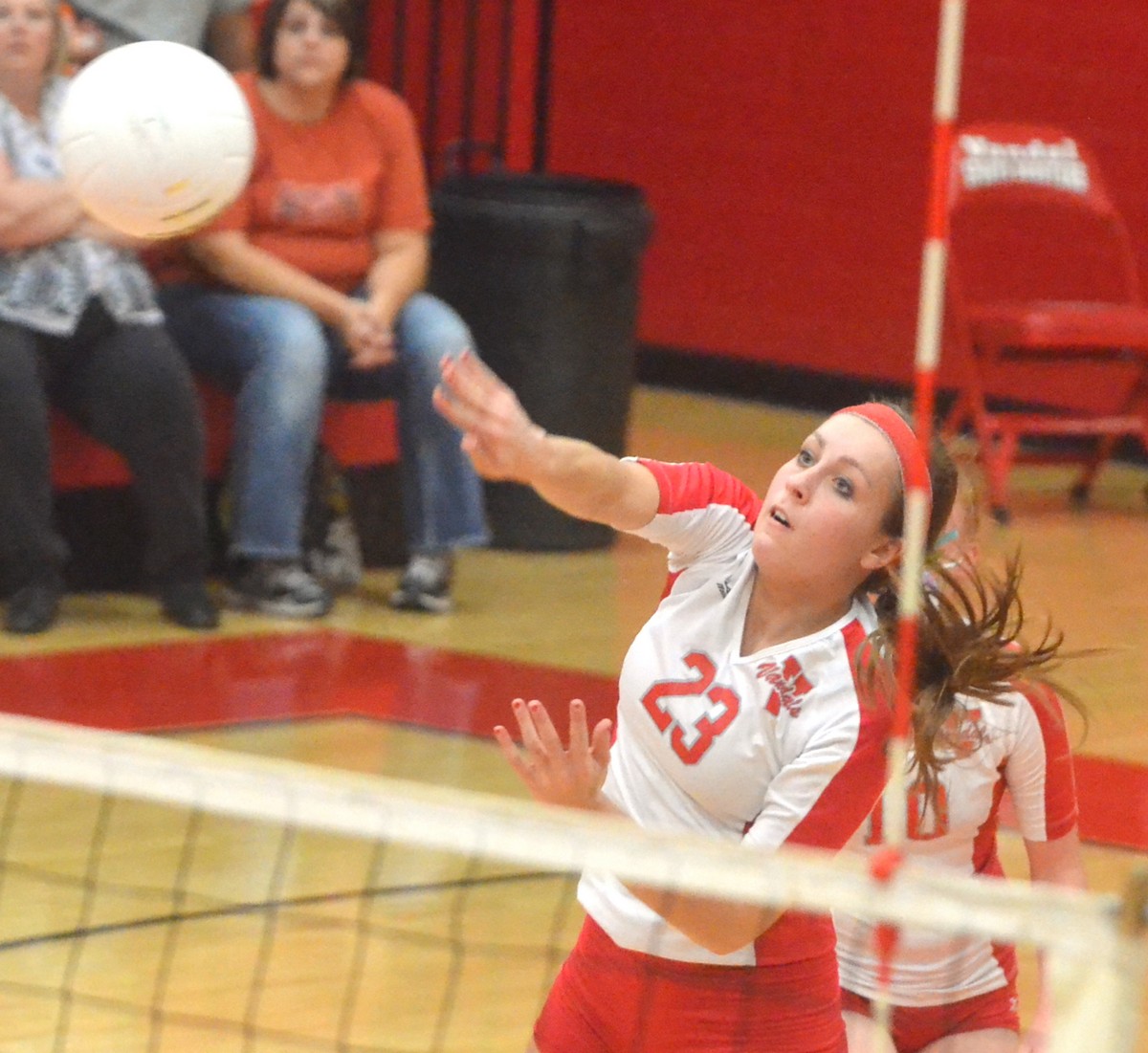