It was a slow walk off of the field for the Vandals on Saturday after losing to Carterville in the first round of the Class 3A state playoffs, as players held on to the last shred of what they had hoped would be a dream season.

A two-point conversion pass in overtime was batted down to gave the Lions the 35-34 victory, ending the season of Vandalia’s large senior class that had aspirations to go deep in the playoffs before injuries knocked out two starters in week nine.

“It’s pretty difficult, because they did everything we asked the whole year,” said coach John Stout. “They put all that stuff from last week behind them to play a championship-caliber ballgame.

“But a nice play at the end by their kid beat us.”

Playing without starting quarterback and defensive back Tim Ritchey and linebacker C.J. Runkel – who were both injured a week before against Greenville – the third-seeded Vandals (7-3) got a tremendous effort from senior Ryan Ambuehl, who gained 226 yards on 35 carries and completed 6-of-11 passes for 76 yards.

All of those tallies are career-highs, and he also intercepted a pass on defense and played every snap of the game.

“He rose to the occasion,” Stout said. “It was a championship effort from a champion.”

Ambuehl rushed for three touchdowns in the game, including the score in overtime, though photo evidence actually showed that he was down just short of the goal line.

Players made the decision to go for the two-point conversion, Stout said, and with the way that No. 6 Carterville’s offense had been driving in the third and fourth quarters, he agreed with their choice.

“They had been moving the ball on us in the second half (298 yards), and the kids wanted to go for two to end it,” Stout said. “We thought it was our best chance to win.”

The game was knotted at 28-28 after junior Rodney Tedrick caught his first career touchdown on a 15-yard pass with 1:18 left in regulation.

“That was a great catch,” Stout said. “Ryan threw that in traffic, so when it was in the air, I didn’t know what was going to happen.”

Carterville (7-3) took the ensuing possession to the Vandalia 27-yard line but couldn’t gain yards on the final play.

Earlier in the quarter, senior Wade Cowger scored his first touchdown of the season on a 2-yard rush with 6:08 left in the game, to tie the score at 21-21.

Stout said he was not surprised by either comeback.

“That shows what kind of people they are, and I am a firm believer that you win with people,” Stout said. “That was an example of what I see from them every day.

“I didn’t have any doubt in my mind that we would score.”

Vandalia scored on the opening drive, using almost six minutes of game clock before Ambuehl scored on a 1-yard rush on a fourth-down play.

The Vandals caught a break on that score, too, as photo evidence shows that his knee hit the ground prior to the ball reaching the goal line.

Ambuehl added a 21-yard rush early in the second quarter to give Vandalia a 14-0 lead.

Carterville got on the board with 0:58.4 left in the first half, with Michael Aschemann scoring on a 4-yard run.

It was the first of 21 straight points for the Lions, as Phillip Frangello scampered 6 yards for a touchdown, but the extra-point kick failed.

With 1:58 left in the third quarter, Frangello caught a screen pass from Aschemann and went 31 yards for a touchdown. Aschemann rushed for the two-point conversion to put Carterville ahead, 21-14.

“It was a good game today,” Stout said. “They made plays and we made plays, but they made one more in the end.”

Carterville will host Benton in the second round on Saturday.

The player who ended Vandalia senior Tim Ritchey’s season did not start and was eventually lost for the rest of the playoffs in Greenville’s 55-27 win against Anna-Jonesboro on Saturday in a Class 3A playoff game.

Brandon Duncan suffered an ankle injury during a two-point conversion in the first half and will miss the remainder of the playoffs.

The Comets trailed 21-8 early in the game, but scored three times before halftime to take a 29-21 lead, with quarterback Tyler Hutchinson scoring as time expired in the first half.

Greenville (9-1) added three scores in the final three minutes of the game.

Cameron Walter had 242 rushing yards on 34 carries, and Hutchinson passed for 223 yards.

Jay Kemp had 178 rushing yards and three touchdowns for A-J.

The Comets host Vienna on Saturday.

Brendan Stewart had 251 yards and five touchdowns on 14 carries to lead Carlinville past Arthur-Lovington in the first round of the Class 2A playoffs.

Also for Carlinville, Cory Farneti added 213 yards and two touchdowns in the 46-12 victory.

The Cavaliers (9-1) travel to Casey-Westfield on Saturday.

Ian Kirk had a 5-yard touchdown in the fourth quarter for Pana (5-5), and Kyle Miller had a 55-yard reception during the game. 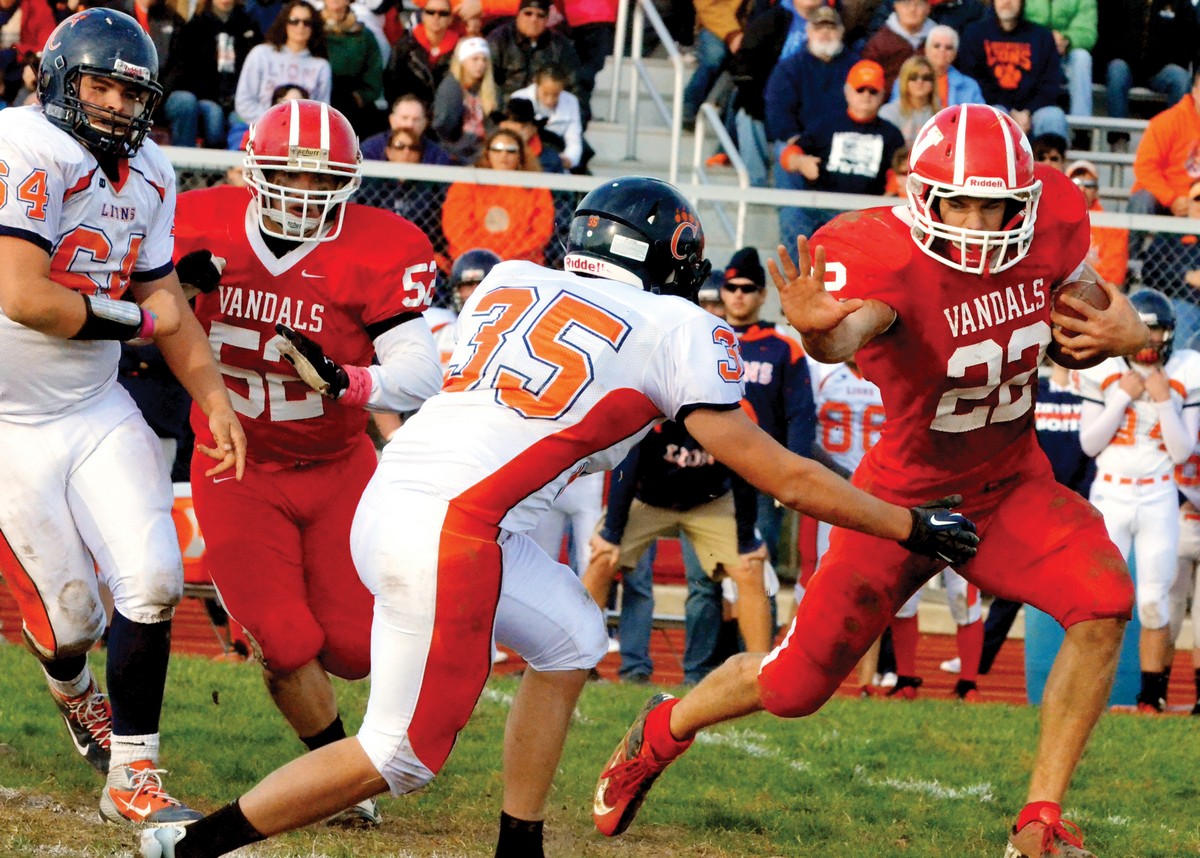 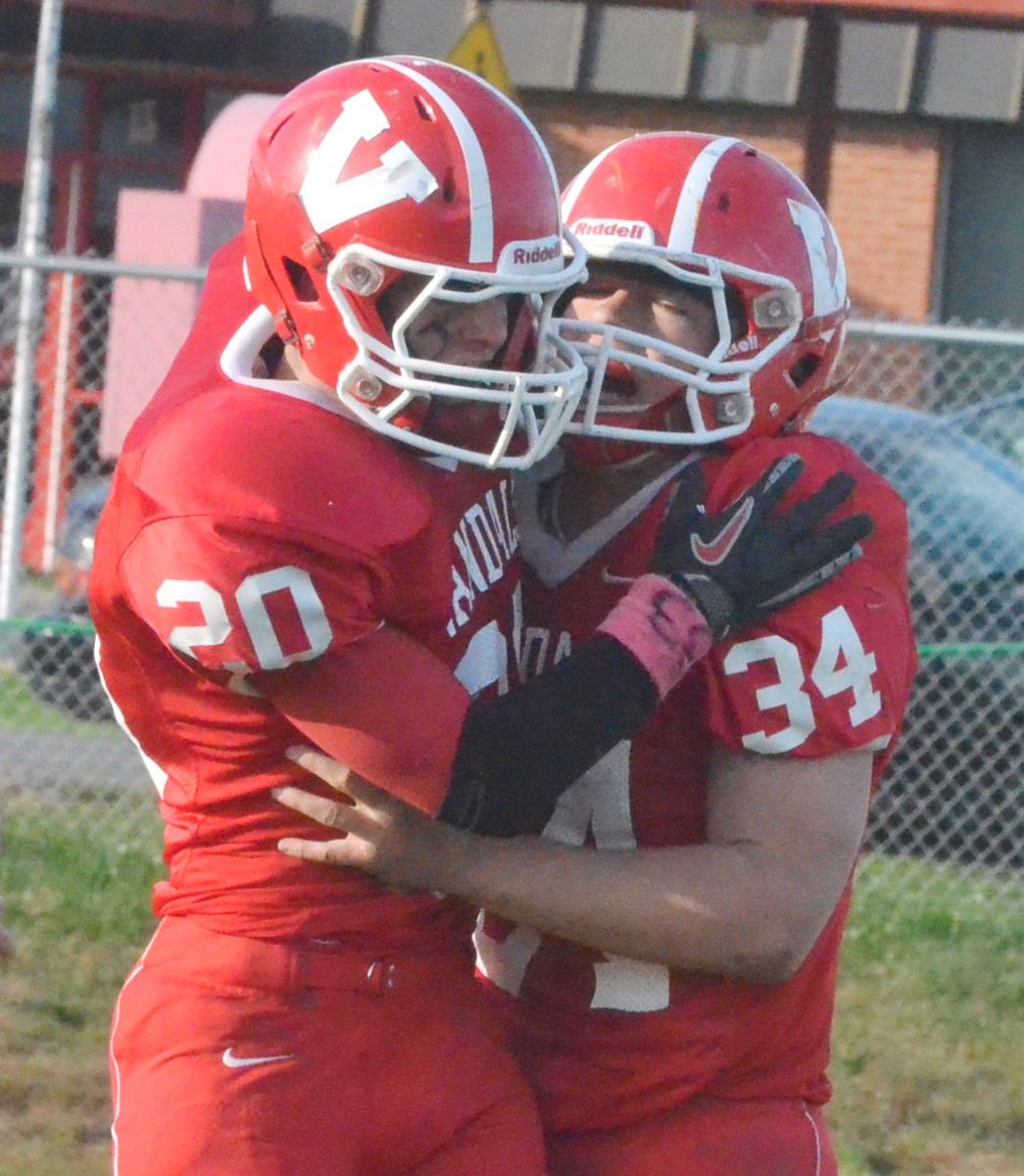 Rodney Tedrick (left) celebrates his first-ever varsity touchdown with Alex Newsom. His score forced overtime in the first round of the playoffs on Saturday.