Is this the year?

Vandalia and Greenville’s storied rivalry has been one-sided recently, but the Vandals are hoping that this year, the Battle of I-70 will result in a Vandalia victory for the first time since 1999.

“They like to spread it out, so we have to cover everybody and be aware that they can run it up the middle,” said senior Alex Newsom. “We can’t let them think they have a chance, or if we do get down, we can’t think that we don’t have a chance.”

There is a lot of incentive for the Vandals on Friday night, as they will be celebrating their large senior class prior to the game and a win would give them an 8-1 record that could mean a No. 1 playoff seed.

Both the Vandals and Comets come into the marquee matchup tied with Carlinville atop of the South Central Conference standings, with all three teams at 7-1.

Though unlikely, if Carlinville is upset by Litchfield (2-6) this week, the winner of Friday’s game would be the conference champion.

Despite all of that, coach John Stout said the key to victory will be to just play the same style of football that the Vandals have played all season.

“(Our players) just need to play their normal game,” he said. “We proved all year that we are a good football team, and we have made teams adjust to us, so we aren’t changing anything.

“Our goal is to play another football game and reap the reward at the end of the ballgame like we have the last several weeks.”

The game will feature a star-studded field, as both Vandalia and Greenville have several players who will have opportunities to play football at the next level.

The Comets are a balanced team on offense, posing a threat to run or pass the ball.

Cameron Walter, a senior, leads the Comets with 1,346 rushing yards, and has had more than 700 in the past two weeks, including a school record 342 last Friday against Gillespie.

“Last year, we did a decent job of changing speeds and looks on them, and that’s going to be our strategy this year, too.”

At quarterback, the Comets rely on Tyler Hutchinson, a sophomore who has 19 touchdowns on the year and has thrown for at least 105 yards in each game.

Six different receivers have caught a touchdown for Greenville, and the Comets have scored at least 45 points in all but two games.

The two games that they scored less than 45 came against Carlinville and Staunton, which after the Vandals have two of the next three best scoring defenses in the conference.

Vandalia’s defense has recorded 60 tackles for loss on the season, while allowing a conference-low 114 points. The most points the Vandals have allowed in a game is 32.

And Stout said those 11 players are a big reason why the team has been so successful.

“I’ll put our guys up against anybody in the conference, even Carlinville,” Stout said. “I’m very confident in our guys.”

The game has been dubbed the Pink Bowl by Greenville Regional Hospital in honor of breast cancer awareness month, and T-shirts will be on sale at the game.

Several players will have the chance to reach several season milestones against Greenville.

The state playoff pairings will be released on Saturday night, and fans can watch the pairings get revealed live.

A live stream will be provided at www.ihsa.tv, beginning at 8 p.m.

In the past two games, Ambuehl has recorded five touchbacks on kickoffs, and Stout said that has been hugely beneficial to the team.

“Ambuehl being able to put the kickoffs in the endzone to force teams to start at the 20,” Stout said, “that gets the defense fired up, because they want to keep them pinned.”

He has been able to get touchbacks by altering the style of kickoff he is using, going from a soccer style to a straight-on style.

Two more SCC teams can make the playoffs with victories this week.

Pana and Staunton both come into the final game with a 4-4, and with a victory, they both should make the postseason.

Both teams have favorable matchups, as Pana travels to Hillsboro (1-7) and Staunton travels to Gillespie (2-6). 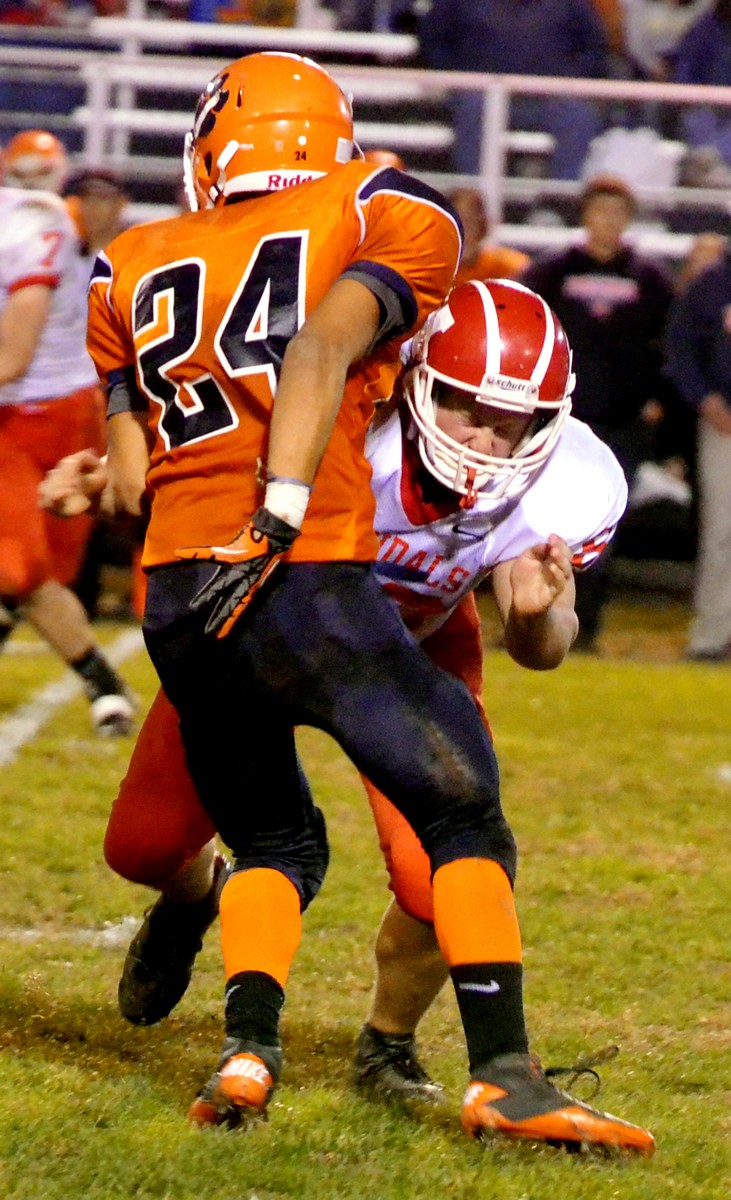 Vandalia’s defense, including junior Tristin Long (above), will have to have another good game on Friday for the Vandals to beat Greenville.