ST. ELMO – Brownstown opened the 2012 Egyptian-Illini Conference Tournament with a win against Patoka that had almost all of its players getting on the stat sheet.

“Because of the way a lot of teams utilize their right side, she has had a lot of nice matches where she had a full floor to work with,” said Brownstown coach Toby Harms. “If we can get her the ball, she can put it down.”

She also added a solo block and two block assists during the game.

Oberlink didn’t necessarily dominate the game, however, as her kills never came consecutively.  In fact, each of the eight times Brownstown had two straight kills, they never came from the same player.

Patoka coach Paula Copple, however, said that it was her team’s lack of preparedness, rather than Brownstown’s versatility, that put her team in a hole too deep to get out of.

“We played well against them in the beginning of the season, but my girls just weren’t in it for this game,” she said.

Brownstown quickly took a lead in the first set, opening up a 10-4 advantage through the serve of Kistler, who scored four straight points and recorded two aces. Later in the set, Johnson had her two aces during a string of five straight serves that left the Lady Bombers ahead, 17-6.

Two aces from Oberlink and a kill each from Howard and Walk ended the set.

In the second set, Brownstown took a 9-1 lead off of Oberlink’s first turn at the service line, where she converted six straight points, including three aces.

After each team strung together several serves in a row several times, the Lady Bombers were finally able to put the match away, recording four straight kills during Austin’s serve late in the set and killing off eight of the final 12 points.

“For a team that has spent the majority of the season being offensively-challenged, that’s a big improvement,” Harms said. “Our offense has come around to the point where we are an ok team.”

For the Lady Warriors (5-9), senior Darian Tolka, junior Taylor Meyer and sophomore Morgan O’Brien each recorded one kill, while Meyer had two aces and Tolka and O’Brien each had an assist. 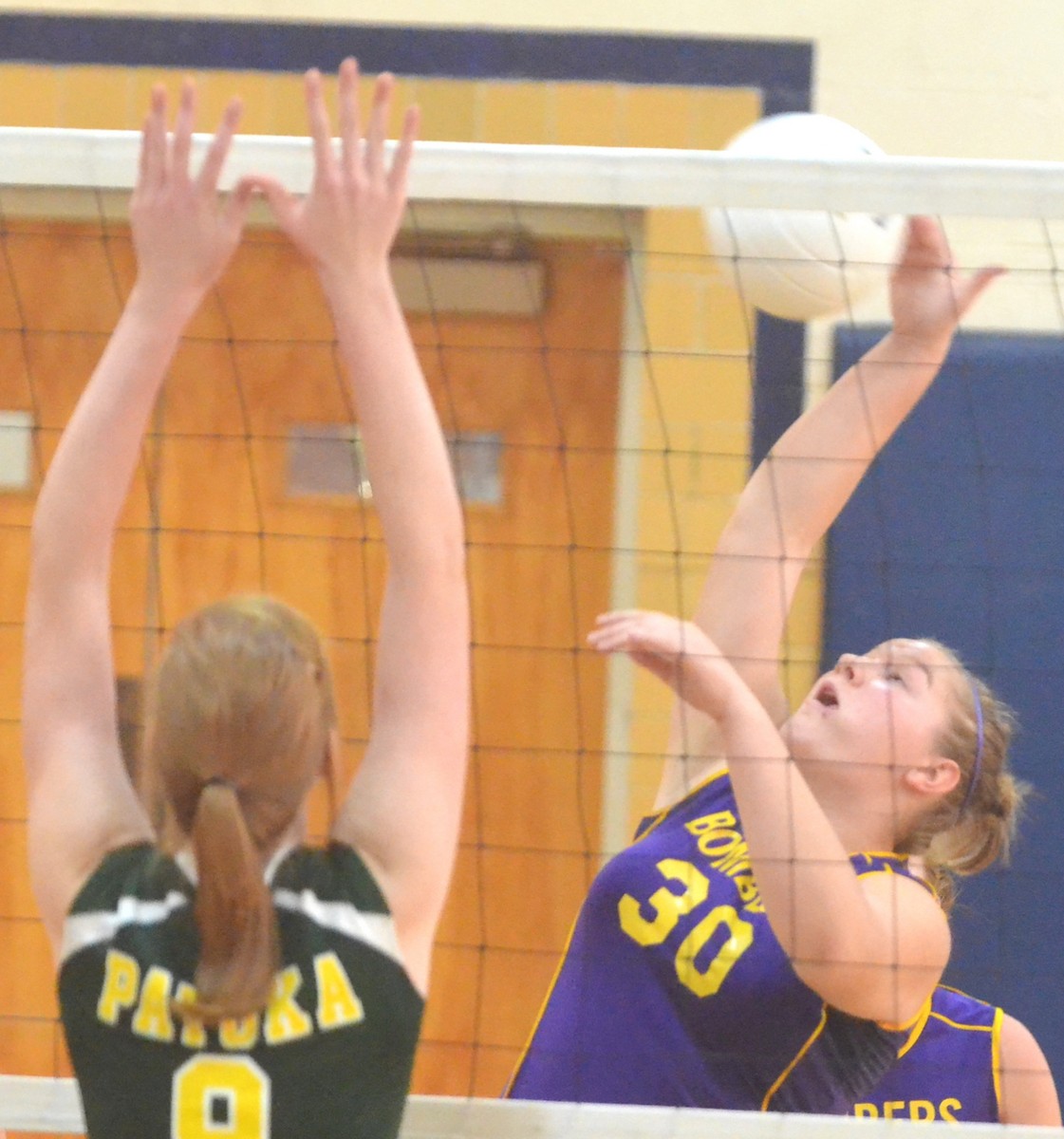 Brownstown junior Courtney Howard attacks one of her five kills against Patoka in the EIC Tournament on Monday.