Three Vandalia High School boys track athletes qualified for the state meet, and each of them set one school record in the process.

Senior Quenten Austin headlines the group – which includes juniors Ryan Ambuehl and Wade Cowger – after winning the sectional championship in both the 110-meter and 300-meter hurdles.

“These guys set goals and worked for the goals, and it’s a privilege to be part of that,” said coach Jane Bell. “Coaches put together the workouts, but the athletes have to do them.”

He came into last Friday’s Lawrenceville Sectional with the goal of qualifying for state in both hurdle races and the discus, but he was satisfied with getting through in two events for his final state meet.

In the past, Austin had trouble defeating both Dominic and Andrew Vahling in the 110-meter hurdles, but he beat both of them twice this season to establish himself as one of the region’s top hurdlers.

He has been in contact with record-holder Tim Michel throughout the season, and Bell has gotten some last-minute tips from some coaches to try to help Austin reach his goals.

“It’s about going out and running like it’s the last meet of your life, even in the prelims,” Bell said. “But he wants to be in the finals.”

Cowger will be a first-timer at the state meet, after placing second in the 800-meter run in a school record time of 2:03.69.

He beat the record previously held by Daniel Bell (2:03.84) and is excited about his first opportunity to run at the state meet.

“I was just tired, but happy,” Cowger said of his sectional race. “It sunk in after the throwing up.”

Ambuehl placed second in the 400-meter dash, bettering his own school record with a time of 0:51.84. He initially set the record of 0:52.56 at this season’s conference meet.

He is also seeded near the bottom of the list, 33rd out of 36, but if he can drop another three-quarters of a second off of his time, he would be ranked 13th. That is fairly reasonable, because unlike during a typical meet, Ambuehl will not be in any events prior to running the 400.

“It’s great to be going, since I didn’t make it my freshman or sophomore years,” Ambuehl said. “(At this point) I was hoping to be in the 52s, not the 51s, so hopefully I can make it into the 50s.”

Both Ambuehl and Cowger said it will be good for them to have a pair of teammates with them at the state meet, and Austin, who has been there twice, is the perfect mentor for both of them.

Austin remembers his first time at state as a freshman, and he hopes the two juniors will not make the same mistake he did.

“No regrets,” he said. “When I was a freshman, I tried to be tactical instead of just running, so I will tell them, ‘Don’t change anything and it will all work out.’”

The state meet begins on Thursday at O’Brien Stadium on the campus of Eastern Illinois University in Charleston, with the preliminary running events beginning at 11 a.m.

The finals are on Saturday, beginning at 10 a.m.

At the sectional, Ambuehl also picked up points in the 110-meter hurdles, placing fifth in 0:16.29, and the triple jump, placing sixth, with 37 feet, 4 inches, to help the Vandals place eighth as a team.

He was seven seconds away from second place, and Bell thinks he will have a shot to qualify for state as a sophomore.

“He was right there,” she said. “Ben ran an almost perfect race.

Strobel is going to try to run cross country and play football next fall, and Bell said that the running that many extra miles in training will help him drop his time next spring.

Junior Zach Jackson was expected to contend for a spot at state in the pole vault, but an injury derailed his season. However, Bell was pleased to see that he watched the pole vault at Lawrenceville to prepare for next season.

Vandalia junior Wade Cowger broke the school record in the 800-meter run at last Friday’s Lawrenceville Sectional to qualify for the state meet. He placed second in the race, with a time of 2:03.84. 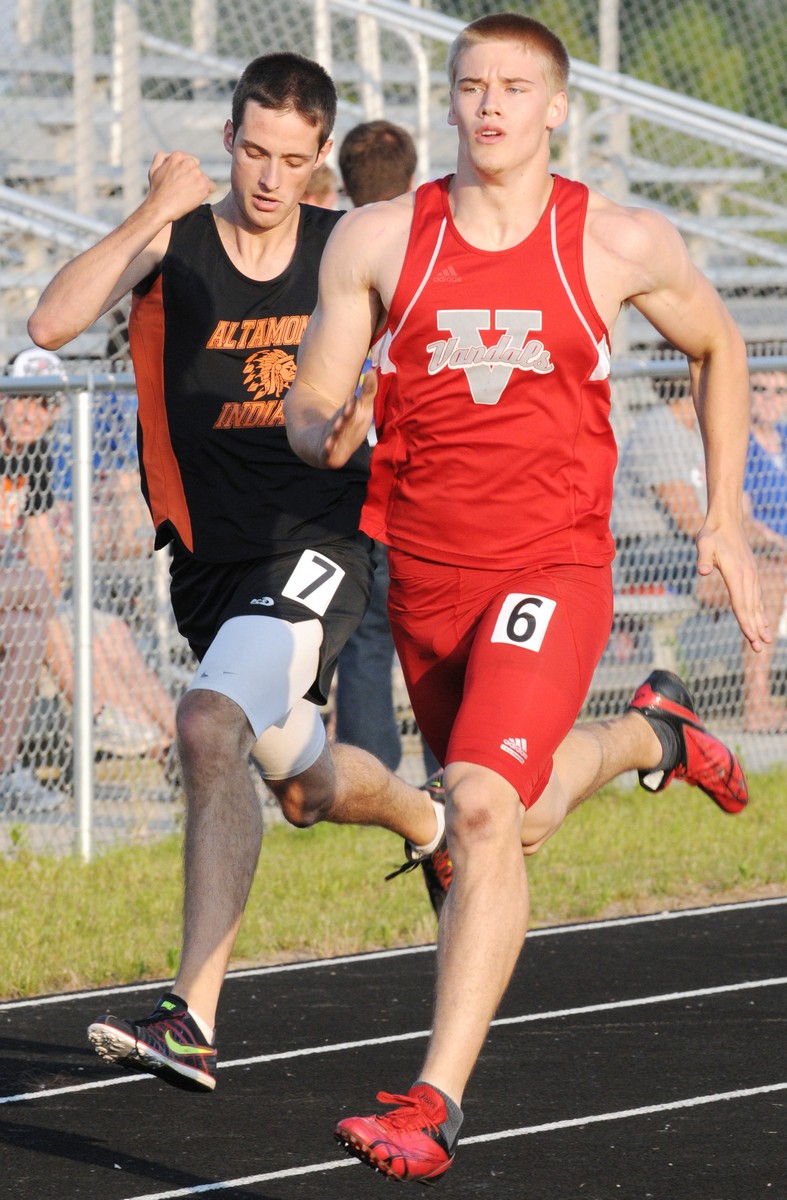 Junior Ryan Ambuehl powers past a runner during the 400-meter dash. He placed second in the race, breaking his own school record (0:51.84) and qualifying for the state track meet. 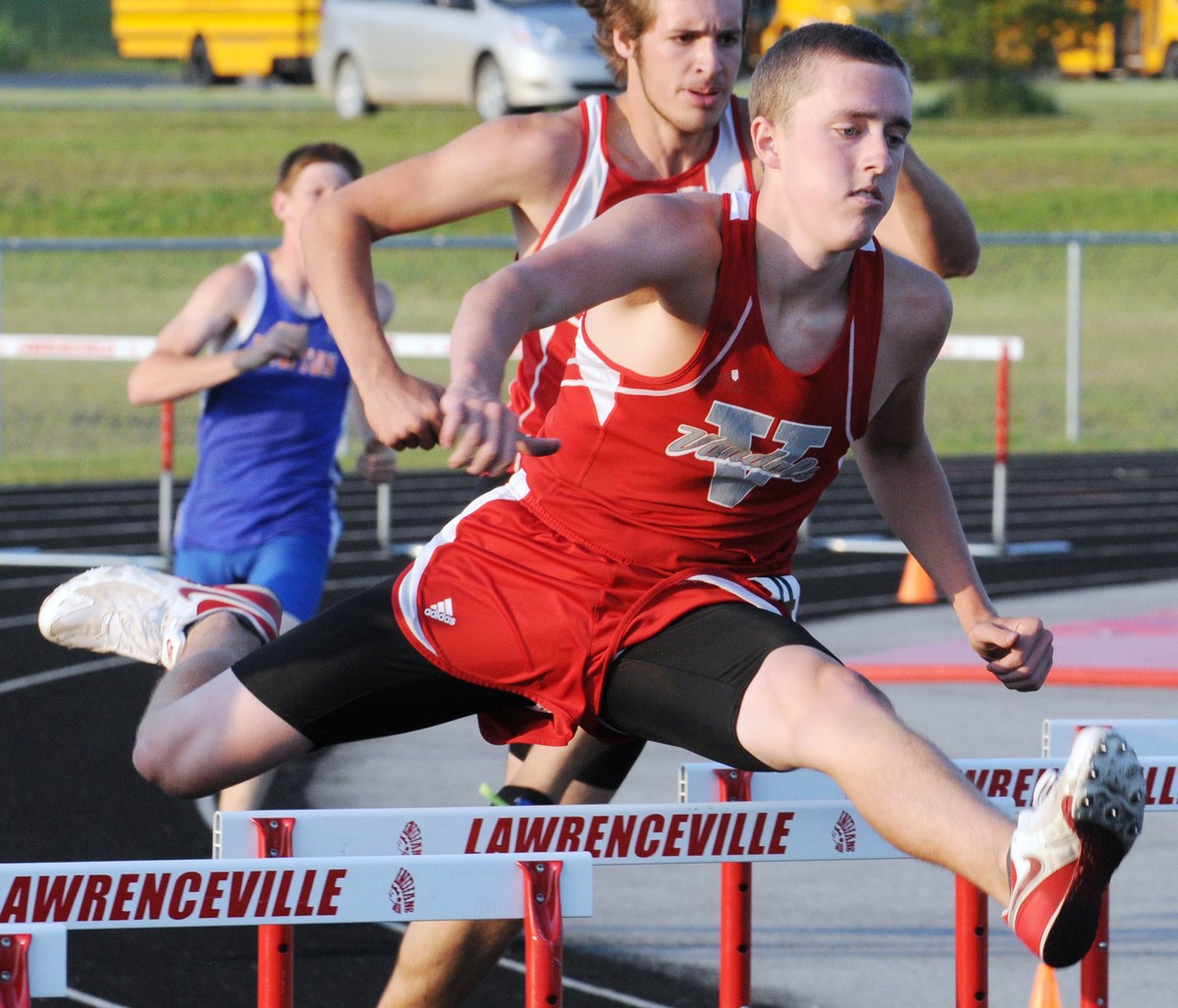 Senior Quenten Austin clears a hurdle on his way to the sectional championship in the 300-meter hurdles at last Friday’s Lawrenceville Sectional meet. He broke his own school record in the event (0:40.82).

Freshman Ben Strobel placed fourth in the 1,600-meter run, falling seven seconds short of a spot at the state meet.