His vault of 10 feet was three inches short of his personal best, but it was still good enough to beat out two contenders by three inches.

“My hard work paid off through the year,” Gordon said on Monday. “There were a lot of good competitors at the meet, but I guess I had the best day.”

Schroeder, who was not at the state meet due to his son’s high school graduation, said it’s Gordon’s work ethic that has allowed him to reach this level.

As a sixth-grader, Gordon got limited practice in the event but was still able to clear 7 feet, 9 inches.

Now with a pole vault pit at Vandalia High School, Gordon has been able to work daily during the season to begin bending the pole and drastically refine his technique.

“He works during the summer and did all the extra stuff he needed to do to be successful, and it’s paid off with a state championship,” Schroeder said on Monday. “This is the culmination of his hard work, but he is going to keep improving.

“His work ethic is second to none, and he is willing to put in the pain and sweat to be fighting for the state championship again,” he said.

The second-place finisher for eighth-graders this season vaulted 12 feet, 6 inches, and if Gordon wins next season, and he will be the second vaulter in a row to win back-to-back state titles.

He said he needs to continue getting stronger and keep building his technique to keep getting better over the next few years.

All the while, he also needs to keep his inner-daredevil pumped up and ready to go.

“There’s a little bit of danger and adrenaline involved,” Gordon said. “And I like that.” 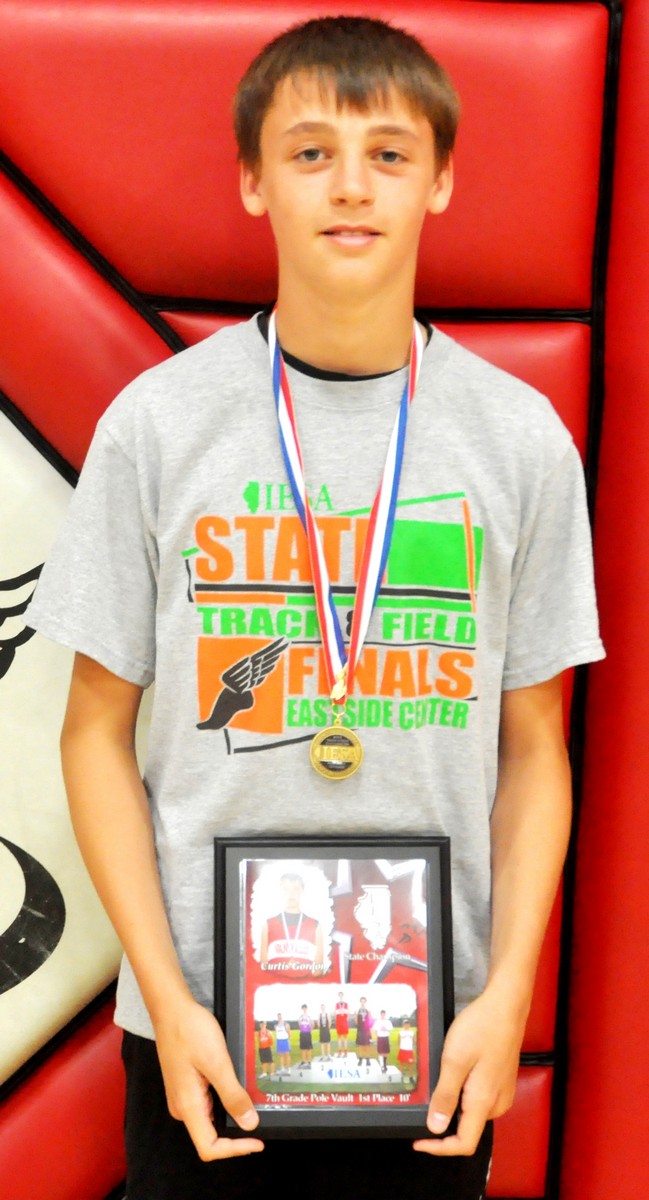 Vandalia seventh-grader Curtis Gordon was the Illinois Elementary School Association seventh-grade state champion in the pole vault, winning the event with a height of 10 feet. He was awarded a commemorative plaque on Monday during the Vandalia Junior High awards assembly.