The Harner family came to Fayette County by covered wagon from Rockingham County, Va., in 1860.

George Lafayette Harner and his wife, Anna Life, married in Virginia and both died in Fayette County. No grave marker was found in Sidener Cemetery for George, although Anna’s stone was found, which indicates that she was born in 1819 and died in 1888.
They were parents of 11 children, with the first nine born in Virginia and the last two born in Fayette County. They included John, Jacob, William Henry, Charles C., Sarah, Francis, Johann, Netta, Carrie, Jennie and George L. Harner.
William Henry Harner, the third oldest, was born in 1842, and along with brothers Jacob and Charles, served in the Civil War, all in Company E of the 32nd Illinois Infantry. Charles died on May 24, 1862, in Cincinnati, Ohio.
Information on this interesting family was sent to me by Andy Harner, in response to an article about another village published in this column.
In addition to several photographs, Andy included a handwritten story by LJean Harner Barnick about the Harners' Avena Store.
LJean wrote, “In later years the (store in Avena) had a full-length front porch. It was a general merchandise and food store – crackers in a barrel, tea in big tin containers, a big round of cheese on the counter in a big box to be cut off as purchased, chewing tobacco in a big flat pack, to be cut off in plugs (each with a tiny tin horseshoe on it) – cut with a regular plug-cutting apparatus, a spittoon on floor near a rusty old potbelly stove – with a few chairs drawn up for the regular loafers.  In back, a stairway leading to a hall above for general community use – Medicine shows, plus oyster suppers, etc. Years after this picture, the front left side was used for the Avena Post Office until my dad built a small building for the post office and store several yards east of this location.”
The village of Avena was laid out on March 10, 1870, by J.W. Henry, with the deed to the village filed at the county courthouse in Deed Book 16, page 503. Avena was established as a post office on Jan. 19, 1874, and disestablished in 1931.
The coming of the St. Louis, Vandalia and Terre Haute Railroad was the impetuous for the settlement at this point. At the time of the 1878 history of the county, the village had 100 inhabitants. As noted in the 1878 history, “Among its business enterprises may be found a steam flouring mill with two run of burrs, one general store, blacksmith and wagon shop, and other trading facilities sufficient to meet the wants of the people.”
Avena takes its name from the French word “avena,” which means oat or oat land.  It is noted in the 1910 history of Fayette County that the rich black loam of Avena Township was well-suited for the growing of wheat and corn.
The village of Avena lays half in Sefton Township and half in Avena, and is crisscrossed by not only the railroad but by the Marathon Pipeline.
The descendents of Joseph Lafayette Harner still call the Avena area home. 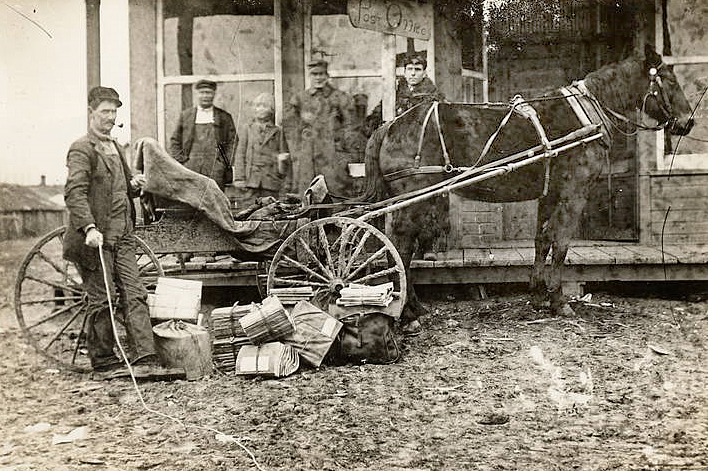 This photo shows the Harner store and the Post Office at Avena. Ernest L. Harner is shown at the far left, leaning against the buggy wheel as he takes the picture with a remote shutter cable. The others in the picture are unidentified.