It’s very difficult to measure where Trevor Montgomery brings the most value to the Vandals.

On one hand, he is the starting catcher and pretty much plays the position flawlessly.

On another, he is the team’s leading power hitter and cranked Vandalia’s first home run of the season during a win against St. Elmo on Monday.

On yet another, he is a dominant closer and struck out the side in the seventh inning of Monday’s game.

But what might be even more important than all of that is Montgomery’s tremendous work ethic – both during the offseason and during practice.

“He does the extra hitting and stays after practice,” said coach Luke Hohlt. “On May 15, leading up to the regional tournament, he’ll be staying after practice to be a better hitter.”

That, plus playing throughout the summer on traveling teams is what has put Montgomery in a position to play collegiate baseball. And while the number of schools interested in him is lower than what would be expected, it’s very unlikely the future optometry major won’t find a roster spot.

“He’ll play ball at the next level,” Hohlt said. “We’re talking with several coaches, and he has taken steps to get himself ready to do that.”

The makings of a catcher
When Montgomery first started playing baseball, he wasn’t a catcher.

Because of his long arms, youth coaches tended to play him at first base, but after awhile, his dad suggested he try out catching.

And a love affair was born.

“I love it a lot. It’s the best position to me,” Montgomery said. “I get to be the leader, and I like to throw guys out at second.”

Unfortunately, Montgomery likely won’t get many opportunities to show off his arm this year, because opposing coaches realize how strong and accurate it is.

St. Elmo coach Ryan Beccue sent just one runner to steal during Monday’s game, and Montgomery nailed him with a perfect throw. He also put out a runner with precision in last week’s home opener.

“He’s doing a better of job of being a leader on the field, and he’s doing a better job of hitting his spots on his throws to second,” Hohlt said. “I don’t think he’ll get stolen on very much, and you have to have that to win.”

Montgomery spent a lot of his time in the offseason working on his ability to block errant pitches, and Hohlt said he has seen the dividends already, even though Vandalia has played just three games.

A Mont-ster at the plate
Montgomery is a threat at the plate no matter who he is facing, and he proved that on Monday.

St. Elmo’s Connor Beasley, a junior who is one of the best small-school pitchers in the county, threw Montgomery a fastball in his second at-bat, and Montgomery muscled it over the fence in left-center field for a solo home run.

“I was expecting curve balls all day, but he finally threw a fastball and I sat on it,” Montgomery said. “I figured they wouldn’t throw me much, since we’ve seen each other so many times.”

Also during the game, Montgomery walked, was hit by a pitch and broke up two double plays with aggressive slides into second base.

Earlier this season, he had a double against Effingham, and he is hitting .333 for the season.

“I’m starting to find it, offensively,” he said. “I struggled facing better pitching (in the first two games).”

Hohlt said that there were probably a couple of other balls Montgomery hit in the first two games that would have been home runs in more favorable conditions.

But as long as Montgomery can maintain enough power to be a middle-of-the-order threat, Hohlt will be pleased.

“We need that guy where the pitcher is thinking, ‘If I center one here, we’re going to be in trouble,’” he said. “Trevor gets the pitcher thinking, and before you know it, we’re making things happen.”

Mowing ‘em down
Montgomery used just 14 pitches to retire the side on strikeouts in the final inning against St. Elmo.

“We’ll throw T-Mont in the save slot if we can.”

Of the 14 pitches Montgomery threw to St. Elmo batters, just five of them were balls, and the hitters swung at and missed five pitches.

In five innings of work this season, Montgomery, who started against Effingham last Wednesday, has seven strikeouts. He has allowed just two earned runs, six hits and two walks.

The value of practice
Montgomery’s work ethic didn’t just apply to baseball in his sporting career.

He played basketball his freshman, sophomore and senior years, and coach Kevin Jackson more than once praised Montgomery for accepting without complaint a role off of the bench during his senior season.

Montgomery became a threat from 3-point range during the season and advanced to the regional semifinals of the Country Financial 3-Point Shootout.

On the baseball side, the extra work has allowed he and his coach to develop a close relationship that has left Hohlt with nothing to say that isn’t positive.

“Trevor and I are pretty close, and he makes me proud,” Hohlt said. “He’s not the only one we have who will have that opportunity (to play in college), and that’s exciting for me.”

His positive influence will certainly be missed when he graduates in the spring, but he is the type of model player that coaches won’t soon forget. 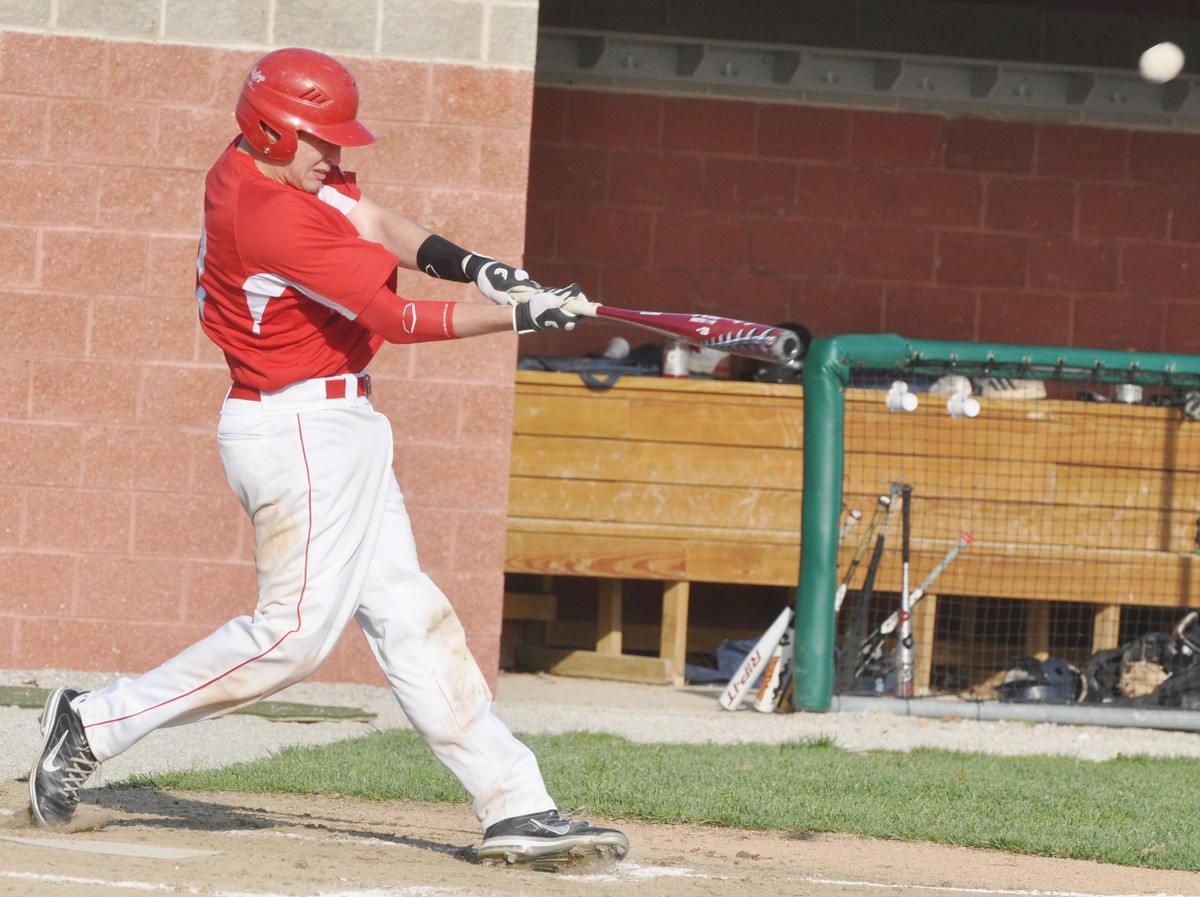 Vandalia senior Trevor Montgomery smashes the team’s first home run of the spring during Monday’s win against St. Elmo. His solo shot proved to be the winning run in the Vandals’ 8-2 victory. 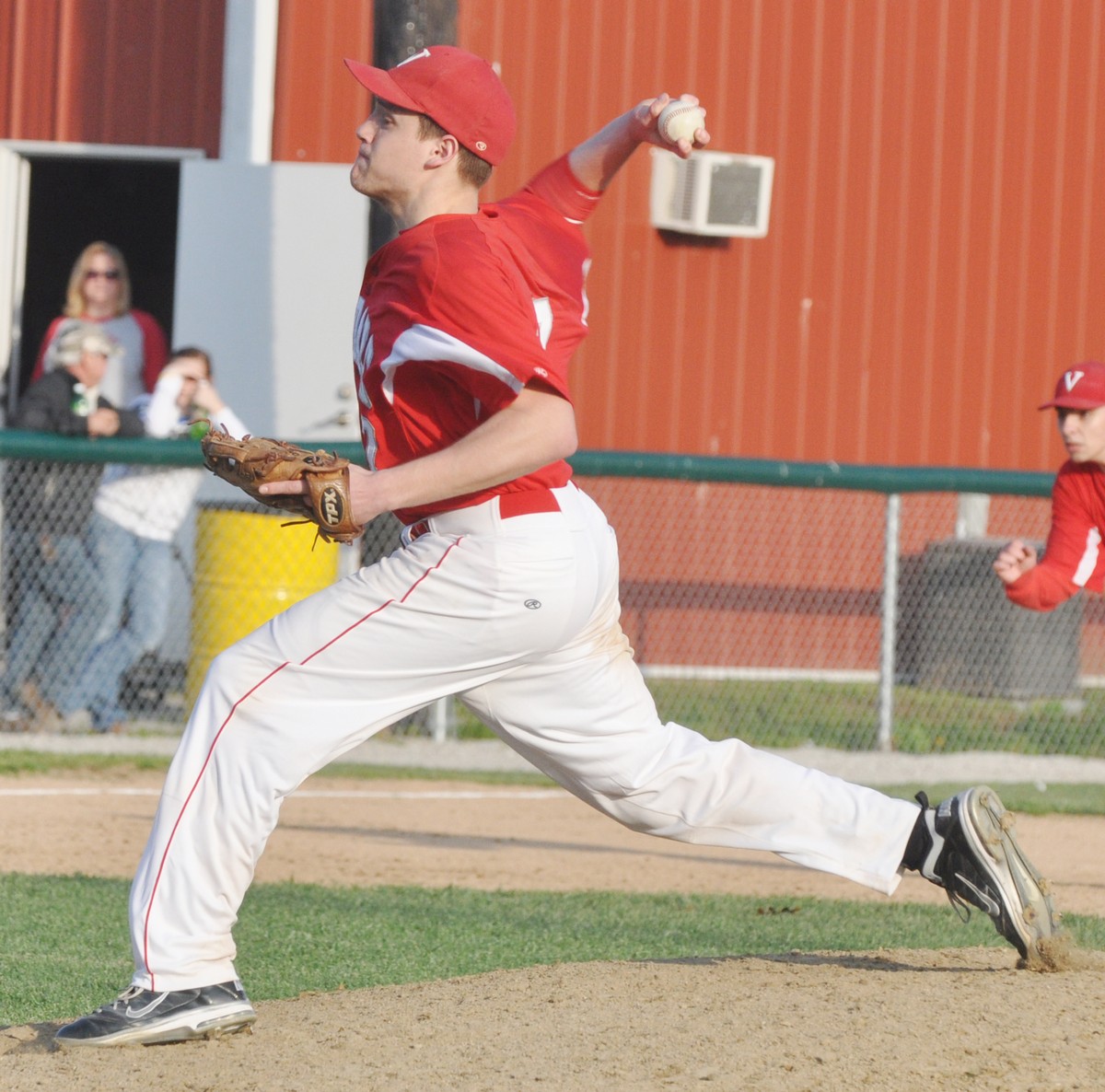 Vandalia senior Trevor Montgomery fires a pitch during the seventh inning of a win on Monday. He had three strikeouts in that inning.