The Kaskaskia Chapter of the United States Daughters of 1812 installed new officers during a meeting held in Greenville, on Feb. 19.

Vandalia resident Jessie Maas was installed as the chapter chaplain.
Chapter members are currently working on many activities to commemorate the bicentennial of the War of 1812.
This is an appropriate time for area residents to consider joining the organization.
Membership in the society requires lineal descent from an ancestor who rendered military, naval or civil service between the close of the American Revolutionary War in 1783 and the close of the War of 1812 in 1815.
The Kaskaskia Chapter was organized in 1917 and is the longest continuing USD 1812 chapter in Illinois.
Throughout its history, the chapter has promoted patriotism, marked historic spots and patriot graves, recorded family histories and traditions, and celebrated patriotic anniversaries.
The National USD 1812 Museum in Washington, D.C., maintains a museum and library of memorabilia from the 1784-1815 time period. 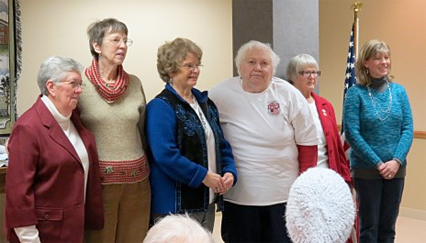 The newly installed officers of the Kaskaskia Chapter of the U.S. Daughters of 1812 are shown above. From left to right are: Grace Haines, treasure