CHAMPAIGN – After a one-year hiatus, the Vandals had a wrestler back on the medal stand at the individual state tournament.

And while it wasn’t the medal that senior Levi Ulmer was hoping to win on Saturday, he ultimately was pleased to place fifth in the 195-pound weight class after an 11-4 victory.

“It means a lot, but it’s a little disappointing for me,” said Ulmer, who entered the tournament as a serious contender for the championship. “It’s still a place, and I’m proud to do it. I’m thankful for everything the good Lord has blessed me with.”

Coming into Saturday afternoon’s fifth-place match, which was contested against Garrett Kestner, a senior from Camp Point, Ulmer was in a funk, having lost in the championship semifinals and the wrestle-back semifinals without scoring a point.

But he made sure that would not happen a third time, securing the first takedown of Kestner just 49 seconds into the match. By the end of the first period, Ulmer led 4-1.

Ulmer secured his third takedown of the bout 48 seconds into the second period, but Kestner’s face hit the mat hard, delaying the match for nearly five minutes as trainers worked to stop a steady stream of blood running from Kestner’s nose.

The bout’s pace slowed for the rest of the second period, which ended with Ulmer ahead, 8-3, but in the third period, Ulmer escaped Kestner’s initial control 33 seconds into the period, and got his fifth and final takedown with 36 seconds left.

“We had a good streak (of placing every year) going and fell a bit short last season,” Clay said. “It’s good for the program and for the other kids to see. Coming in, we had higher aspirations, but coming back for fifth is a lot better than sixth.

“You always like to have more than one person place,” he said. “But it is what it is, and we will keep trying to raise the level of our program.”

In the wrestle-back semifinals on Saturday morning, Ulmer had a rematch with Kenny Lindsey, a senior from St. Joseph-Ogden whom Ulmer defeated in the sectional finals.

The two battled to a stalemate in the first period, but Lindsey got on the board in the second period, scoring on an escape.

Lindsey then controlled Ulmer for the entire third period to take the bout, 1-0. In the sectional final, Ulmer had defeated Lindsey, 4-3, in the second overtime tie-breaker.

“It was more of what I was doing differently,” Ulmer said. “I wasn’t focused and as determined.”

Prior to that match, senior Daniel Edwards nearly had takedowns at the end of each the first and second periods of his wrestle-back quarterfinal match against Gage Hedges, but he would fall to the Monmouth-Roseville senior, 1-0.

Hedges secured an escape 1:04 into the second period of the 152-pound bout.

“Waiting to 7 o’clock got to me,” Ulmer said on Saturday. “I just wasn’t prepared for that match.”

Ulmer won his quarterfinal match against Rock Falls junior Shawn Skinner, 11-5, but he was wasn’t able to get anything going that night against Logan Staver of Lena-Winslow, who beat Ulmer, 3-0.

In addition, Edwards wrestled twice, losing in the championship quarterfinals by fall at 2:34, but winning a first-round wrestle-back match by fall at 4:35, which would prove to be Vandalia’s only pin of the tournament.

Freshman Dalton Blankenship (132) and sophomore Seth Purcell (145) each lost first-round wrestle-back bouts, but the experience they gained will only help the Vandals in the future, Clay said.

“It gets their feet wet,” he said on Saturday. “We have some good young kids, and getting them this experience will be good moving forward, as long as they put in the work during the offseason and in-season to improve.”

Thursday, Feb. 16
CHAMPAIGN – Both Vandalia wrestlers who advanced on day one of the tournament ate Subway sandwiches earlier in the day.

But only one of them was able to keep it down after their match.

Ulmer lost his lunch at the center of the mat last Thursday, after exerting all of his energy in defeating Jeffrey Haley of Quincy Notre Dame, 14-8, in the championship preliminary round.

But he didn’t even get his arm raised by the officials before throwing up on the mat.

“We were just joking about that,” Clay said. “I don’t remember anybody ever puking on the mat before, but it happens.”

It didn’t happen to Edwards, who was able to keep down his steak and cheese sandwich after winning an overtime match against Wilmington’s Sean Liaromatis, 5-4.

All sandwiches aside, though, the wins meant the wrestlers were moving on, and that was something neither of them could say last year, when they both were one-and-done at the state tournament.

Ulmer established immediate control over Haley, securing a takedown just 15 seconds into the match and getting another just seven seconds after Haley escaped his grip.

“When you win the sectional, you usually have a good spot in the bracket,” Clay said. “He needed to get out there and get a match and get a win.”

Haley cut Ulmer’s lead to four by the end of the second period, but Ulmer secured a pair of takedowns over the span of 12 seconds during the third period to move ahead, 14-7.

Ulmer had showed signs of physical pain during the match, but that didn’t stop him from fighting to the finish.

“I was on top of my game in that match,” Ulmer said. “I’m not usually out of breath, but it was a good match.
“I wanted to put it to him, but I didn’t think I’d get winded,” he said. “My body, sometimes, in the first match does that.”

Edwards was forced out-of-bounds with eight seconds remaining in his bout, and at that point, he trailed Liaromatis by two points.

But Edwards willed himself to the victory, securing a takedown with three seconds left in his bout to force an overtime period, then winning the match when late in the extra period, Liaromatis was given a technical violation for fleeing the mat.

“It wasn’t looking good,” Clay said of the end of regulation. “I told him to think for a tie. I wanted him to go for a sweep, hoping the kid would sprawl, and he did.

“That’s something we’ve been working on a lot.”

Added Ulmer, “That was an amazing pull-off. I loved it.”

Edwards had trailed, 4-1, early in the third period after Liaromatis scored a reversal, but he showed more aggression after escaping Liaromatis’ hold.

Reminding himself of where he was with those precious eight seconds left, Edwards immediately worked for the score after the whistle started action again.

“I was thinking that I was tired, but it’s state, so I have to get the takedown,” he said. “I just had to go out there and do it.

“It means a lot. A win is a win,” Edwards said. “I’ve been out of practice and out of shape (because of an injury).”

Senior Dayin Godberson (182) battled hard throughout his bout with Porta’s Dakota Richards, but Richards was able to secure an overtime win, 5-4.

Godberson tied the match at four with six seconds left in the third period, and he had a chance to score a takedown, but he didn’t seize it.

“I think maybe he had some nerves,” Clay said. “He had his chance to win in the third period, but he wrestled hard; he always does.”

Neither wrestler scored in the extra minute, but Richards got an escape five seconds into the first tie-breaker, which would prove to be the winning point.

Vandalia senior Daniel Edwards (right) tries to get control of Wilmington’s Sean Liaromatis during overtime in last Thursday’s championship preliminaries. Liaromatis was penalized for fleeing the mat at that point, giving Edwards a 5-4 victory. 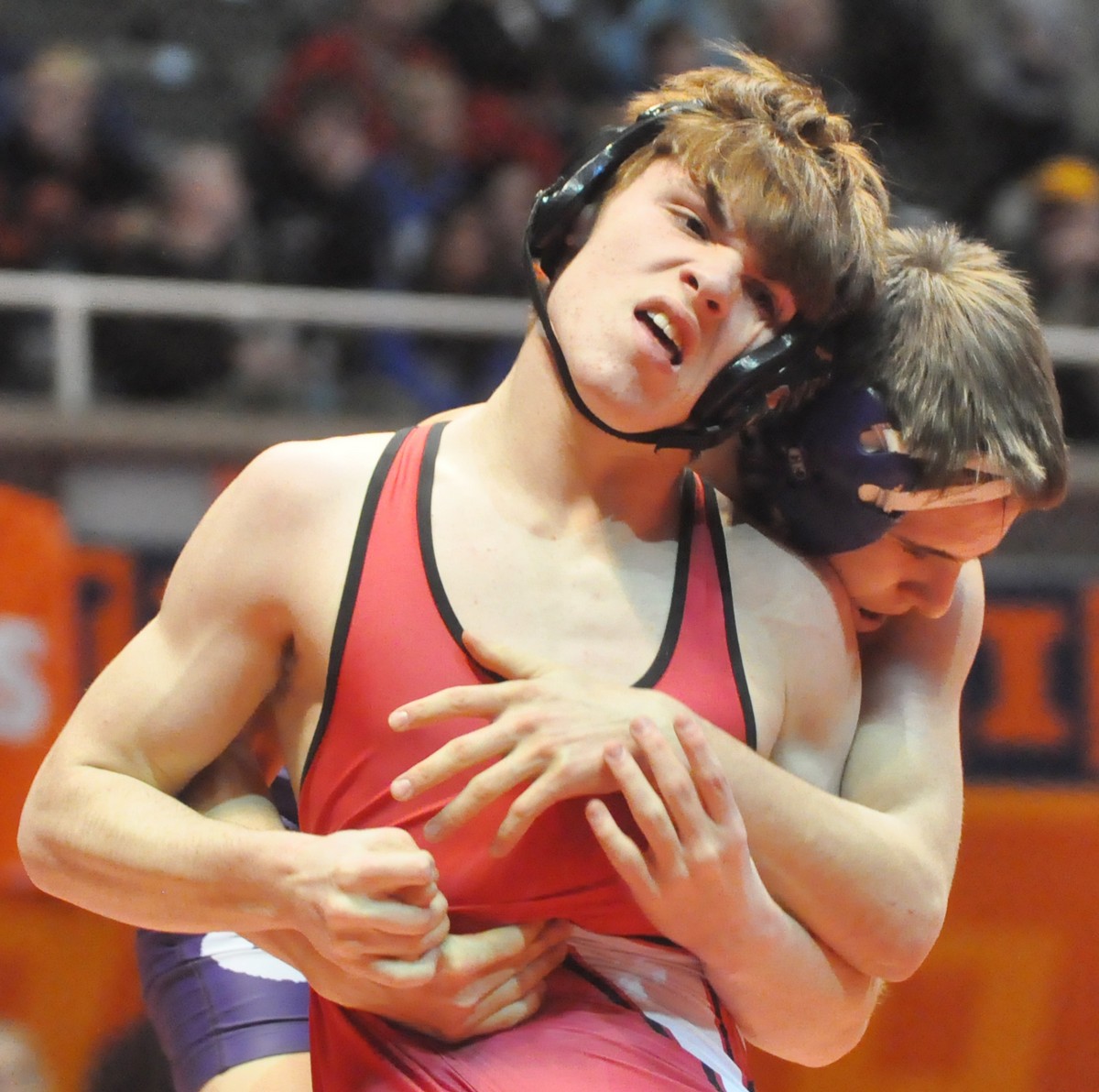 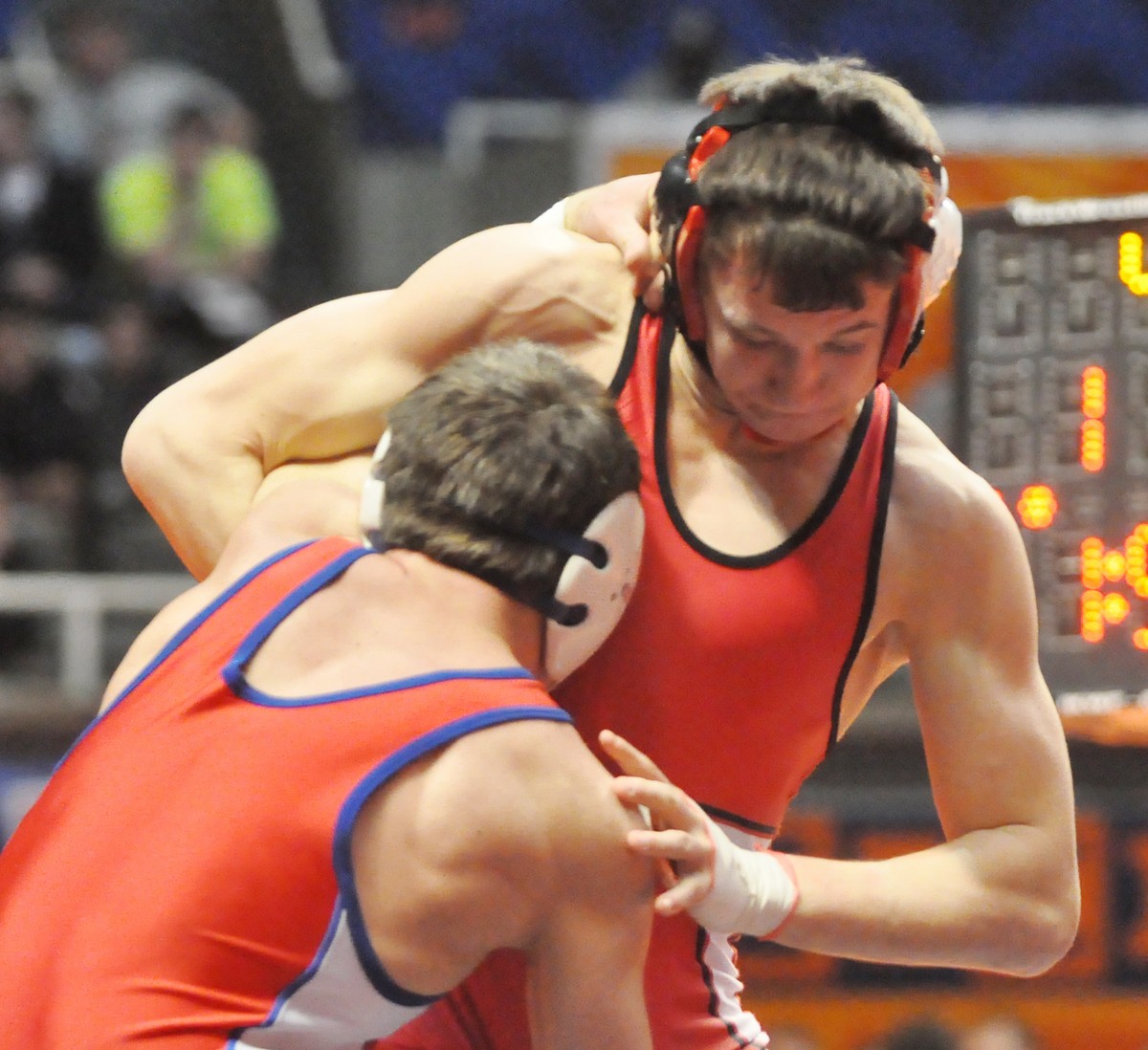 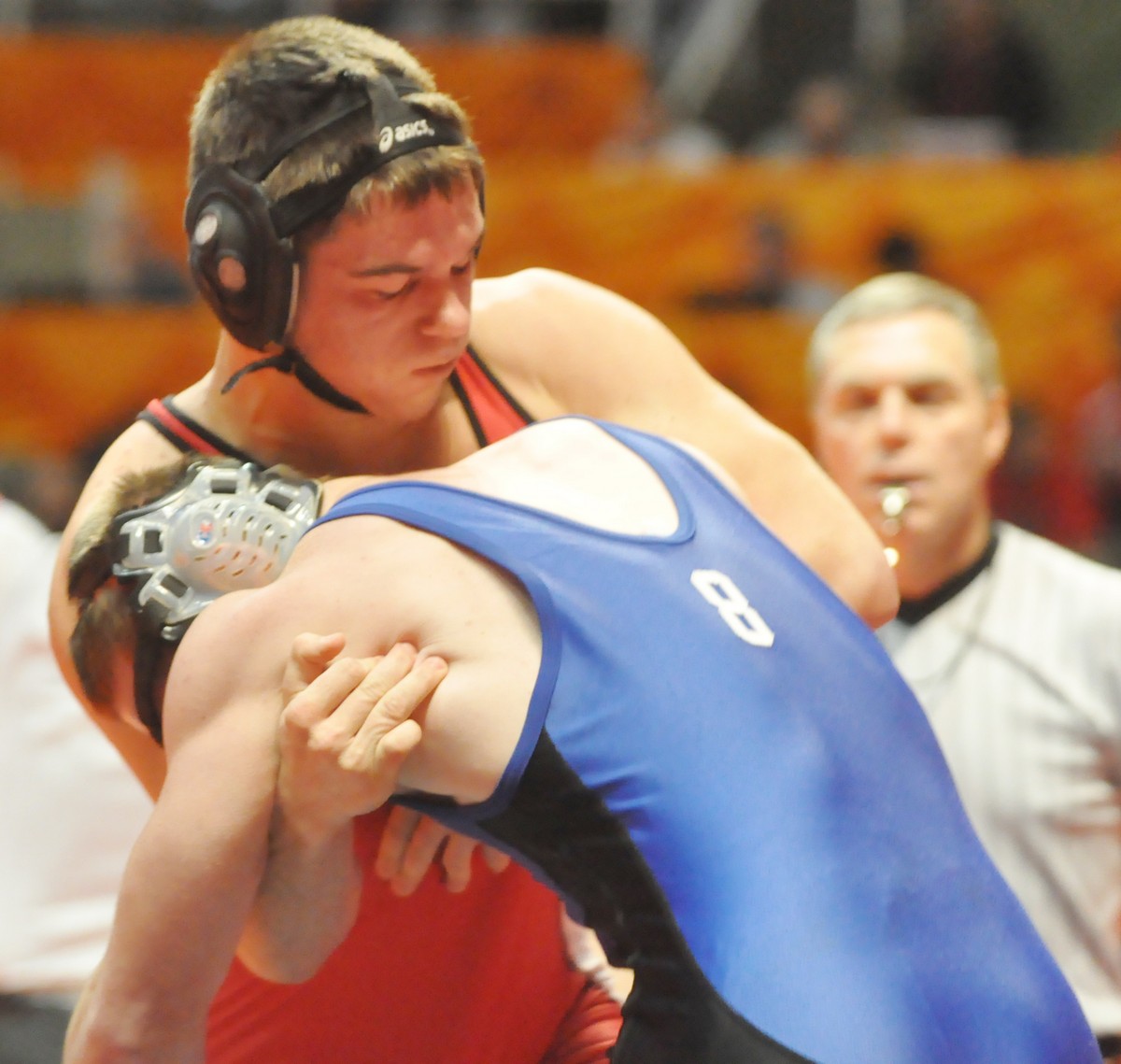