Zoe Zinkgraf, who graduated in 2011, and Cheyenne Rogier, who transferred from Greenville for her senior season, will both play for LCCC in the springs of 2013 and 2014, and coach Ronda Roberts is happy she has them signed up.
“They are excited to be here,” she said. “It’s so nice that they appreciate it.”
Zoe Zinkgraf
Zoe Zinkgraf, who is versatile enough to play nearly every position on defense, did not immediately go to college after her senior season, due to circumstances out of her control.
That year off, however, has helped Zinkgraf fully recover from a stress fracture she suffered in her knee late in her junior season.
“(A year off will) probably be good for her, because she was beat up,” said Mulberry Grove coach John Barnes. “I didn’t think it was in her best interest to catch her last year, so I think the time off has been good for her.”
Roberts added, “She’s been out, but she’s hungry. I don’t think it will hurt her; I think it will fire her up more.”
Zinkgraf, who Barnes said was an all-state-caliber catcher, was one of the most important players on last season’s team, which lost in the sectional championship game, and Zinkgraf says she is ready to start playing again.
But, if she gets hurt again, she won’t be as slow to find out what has happened.
“I found out the day before regionals that I couldn’t play, and I cried for the rest of the season,” Zinkgraf said of her knee injury. “I learned to take better care of myself. If I get hurt – don’t wait four weeks to get it looked at.”
The future forensic science major will probably primarily be looked at as a middle infielder at Lewis and Clark, Roberts said.
Cheyenne Rogier
Cheyenne Rogier is not a stranger to Mulberry Grove softball.
Though she has played the last three seasons of high school with Greenville, Rogier has played with Mulberry Grove during the summer, but she still brings a new dimension to the Lady Aces.
“She’s going to be unique in the fact that she brings with her some experience at a different competition level,” Barnes said. “She’s seen teams that are different than what we have seen.”
That, Rogier hopes, will allow Mulberry Grove to make the deepest Class 1A postseason run in school history.
While Rogier never got farther than the regional semifinals with Greenville, she has a lot of confidence in her new team.
“We’re going to win a state championship,” she said. “We’re going to go all the way. We have good coaching, and we have a lot of good skills.
“It’ll be good. Mulberry is used to winning, so as long as we are clicking as a team, we should do well,” Rogier said.
Rogier will likely play on the left side of the infield for the Lady Aces this season, with spot time in the outfield and at designated hitter.
Barnes said her offensive capabilities are her biggest assets.
“She’s playing Mulberry ball right now,” Barnes said. “Having the consistency of being in our program will help her tremendously.”
The future elementary education major will likely play first base at LCCC, Roberts said. 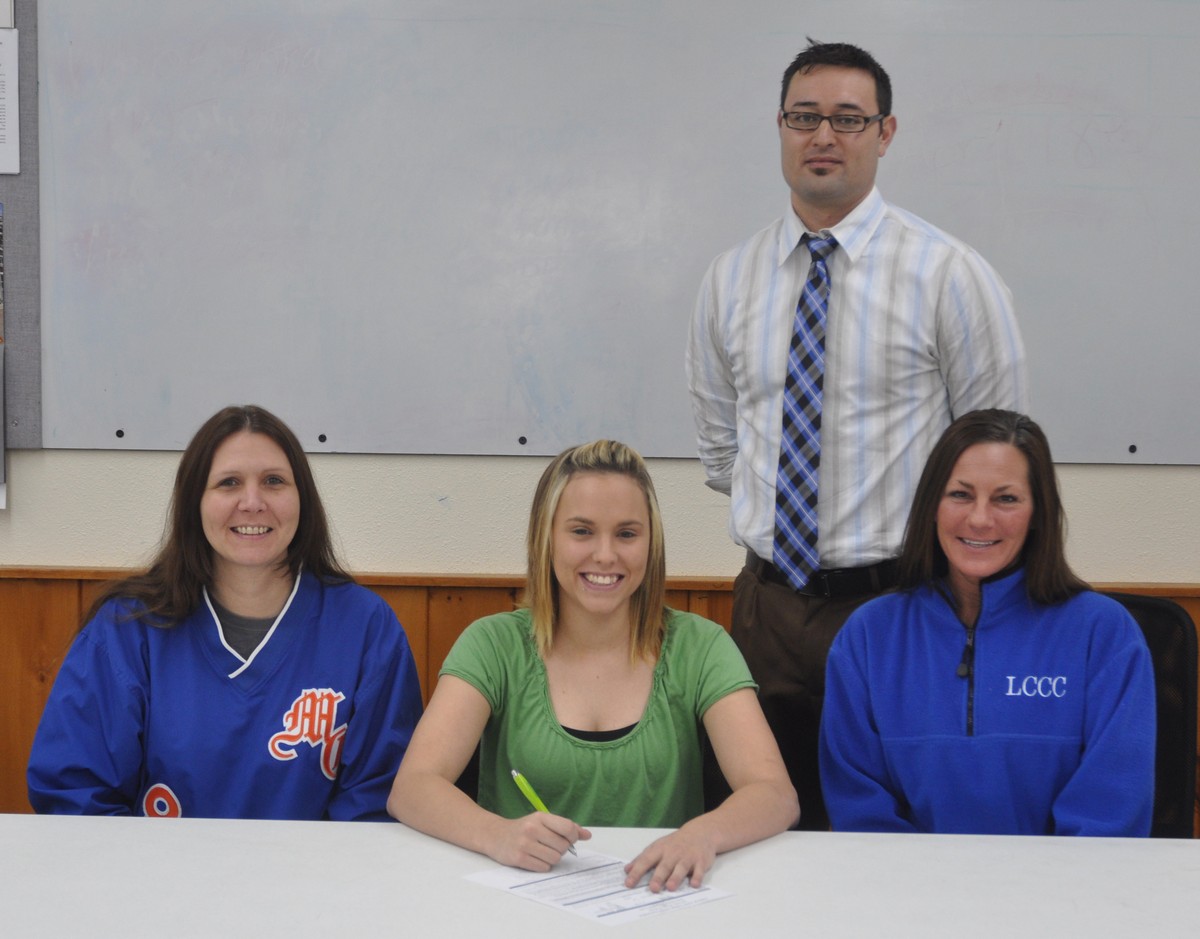 Two Mulberry Grove High School softball players signed letters of intent to play for Lewis and Clark Community College last Friday. Zoe Zinkgraf (seated at center in first photo), a 2011 graduate of MGHS, and Cheyenne Rogier (seated at center in second photo) will both play for LCCC in the springs of 2013 and 2014. In the photo above, in the front row, from left, are: Sandra Zinkgraf, Zoe Zinkgraf and LCCC softball coach Ronda Roberts. In back is MGHS coach John Barnes. In the below photo, in the front row, from left, are: Charles, Cheyenne and Dawn Rogier. In the back are Barnes and Roberts. 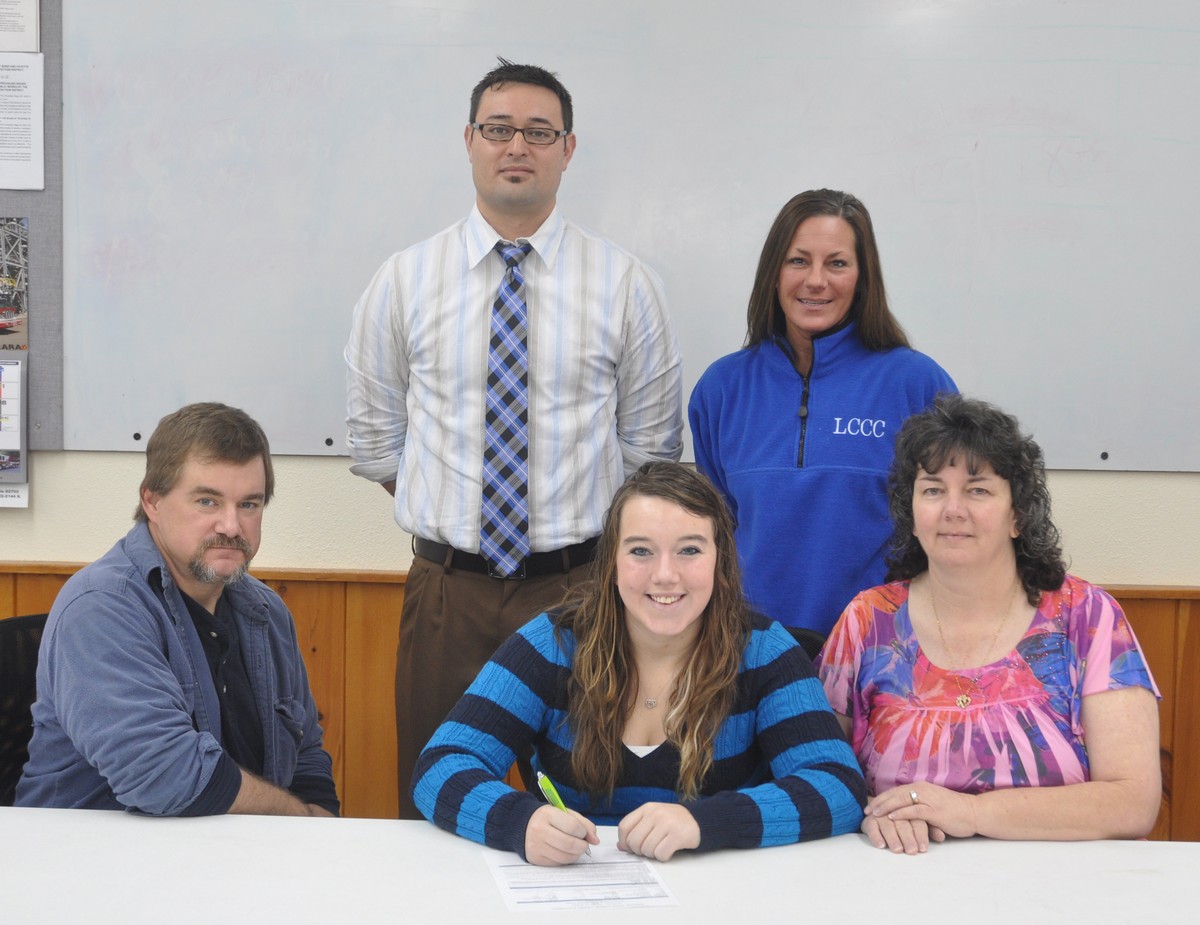