Vandalia and Pana both scored a lot of points and committed a lot of turnovers during Tuesday’s game, but the Panthers gained the edge in rebounding to give them a 65-60 road victory.

The teams combined for 51 turnovers (27 for Pana and 24 for Vandalia) throughout the game, but it was Pana’s ability to grab offensive rebounds that hurt the Vandals the most.

Pana (18-2) scored 16 second-chance points from 12 offensive rebounds, including five points off of two of those boards in the final 2:22 of the game.

“We gave up two offensive rebounds in the last 3:30,” said Vandalia coach Kevin Jackson. “At some time, we have to realize that we have to do little things to win.”

The Panthers also scored five second-chance points during a 12-0 run in the first quarter, which helped give Pana a 12-7 lead, after it had trailed, 7-0.

Rebounding has been an issue for the Vandals all season, and the team had just 14 against Pana, with only two of them coming on the offensive end.

“We work 4-6 box-out drills every day,” Jackson said. “You can look good doing those drills, but when it comes to game time, if you don’t box out and get the ball, it doesn’t matter.”

After Vandalia’s opening 7-0 run, which included a 3-pointer by junior Tim Ritchey to start the game and steals by junior Leyton Godoyo on Pana’s first three possessions, the team trailed until early in the second quarter.

The Vandals (17-6, 6-3 South Central Conference) scored on their first four possessions of the second period, and took the lead on back-to-back 3-pointers from seniors Dathan Berning and Bryan Hosick. Junior Chase Woolsey followed those shots with a layup to put Vandalia ahead, 30-25.

Pana would take a brief lead with 3:16 left in the half, but Hosick made another 3-pointer 20 seconds later to help Vandalia to a four-point halftime lead.

Hosick, along with Ritchey, led the Vandals, with 16 points, and he made four 3-pointers in the first half. The team made seven long-range shots in the first two quarters.

“That kept us in the game,” Jackson said.

Those shots stopped falling in the third period, however, as the Vandals made just 1-of-6 3-pointers, while Pana closed the quarter on a 7-0 run to take a 48-46 lead.

Woolsey scored a second-chance layup – Vandalia’s only one of the game – 44 seconds into the fourth quarter to tie the game, but the Vandals would have just one lead in the period, when Ritchey hit a 3-pointer with 2:38 left to move Vandalia ahead, 56-55.

Pana would secure a pair of 3-pointers in the next 1:30, and then scored five points in a 30-second span in the final minute of regulation. 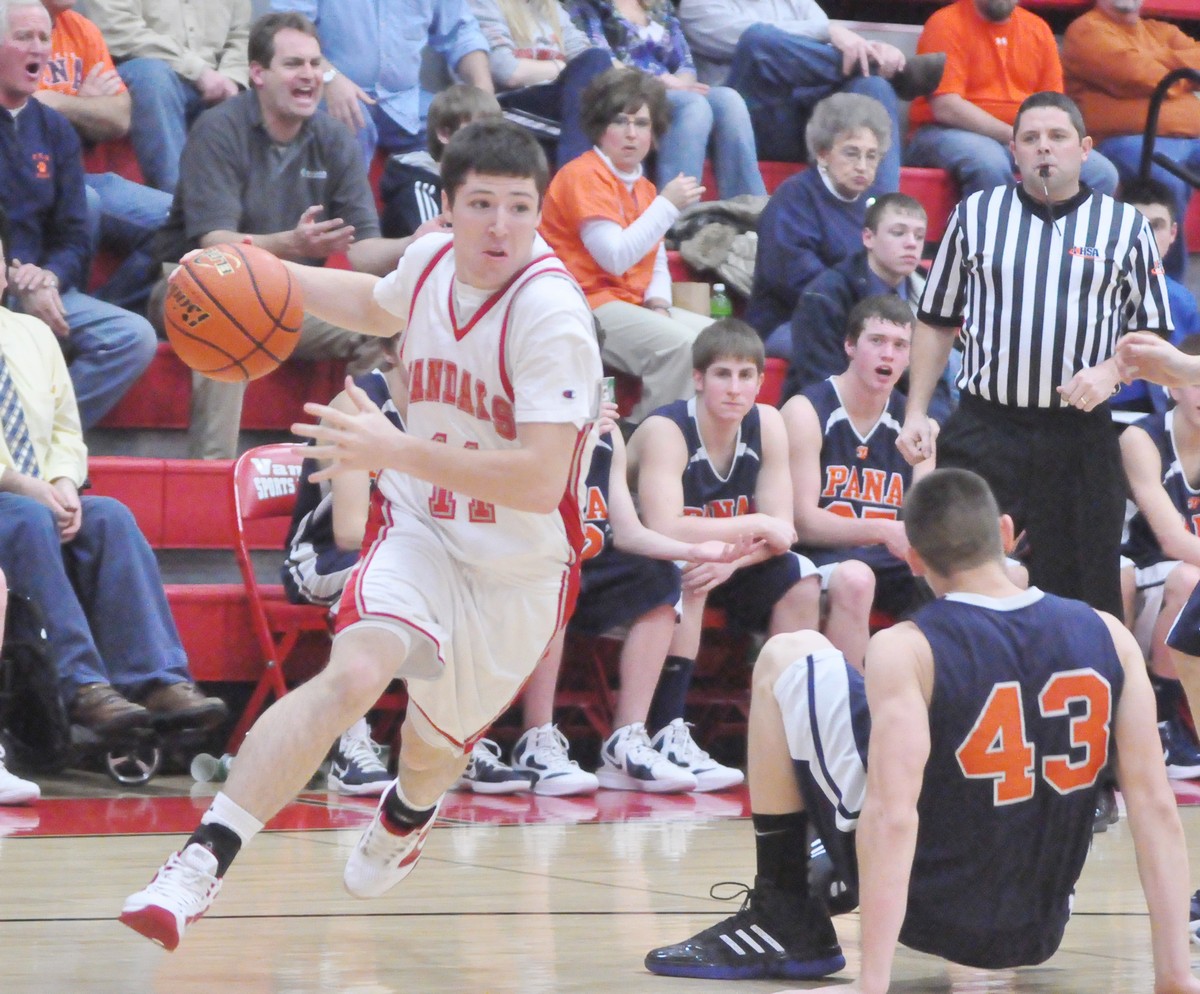 Vandalia senior Dathan Berning runs through a clear path to the basket during a 65-60 loss to Pana on Tuesday.