MULBERRY GROVE – When she isn’t feeling so good about pushing herself while training or at practice, senior Harley Tompkins just reminds herself of one thing.

This spring will be the last chance to make the state tournament.

That inner drive has helped the Mulberry Grove softball standout train for the upcoming season as hard as anyone, and it also helped land her a spot on Parkland College’s squad in the springs of 2013 and 2014.

Fortunately for her, when she begins playing there, the winning has a good chance to continue.

Tompkins signed a letter of intent last Friday to play for the Cobras, which have compiled a .741 winning percentage in coach Chuck Clutts’ 12 seasons at the helm.

But there is no state tournament in college, so what will Tompkins use as her new motivation?

As far as the playing part of that goes, no one is too worried about it.

Both Clutts and Mulberry Grove coach John Barnes cited her offensive abilities as her primary strength, but both also praised her for being versatile on defense.

Playing several positions well helped her get to Parkland, where Clutts expects her to be a middle-of-the-order hitter.

“We don’t look for a kid just to be an outfielder or a third baseman,” Clutts said. “If they have versatility, that gives them a chance to play, but we also talk about how if you’re hitting, you’re playing.

“She impressed our players at our camp, when she was just ripping the ball.”

Tompkins, who will pursue an associate’s degree in biological sciences, has met with current Parkland players twice, and she said she believes it will be a good fit.

With a graduating class at Mulberry Grove High School that numbers in the 30s, Tompkins was not looking to go to a large school. Parkland’s website says the school enrolls about 18,000 students per year.

“She fits in very well,” Clutts said. “I’ve known Harley for a couple of years, and she will follow our rules and have some fun.”

Until then, Tompkins will be looked at as the Lady Aces’ leader this spring.

Barnes, who said he believes Tompkins will be successful in college, compared her to an Indian chief.

“You need people who want to take charge, and she is that person,” he said. “It helps with having another voice out there, because (with players), you can’t have too many Indians and no chief.”

Tompkins is genuine in her desire to lead the Lady Aces farther in the postseason than ever before, which includes being vocal.

And all the while, she hopes she will leave a lasting impact on what will be a relatively young squad.

“I don’t want to let them down,” she said. “Seniors get the reputation of being pushy, but I want the girls to look at me as a leader, not as someone that they’re ready to get rid of at the end of the year.” 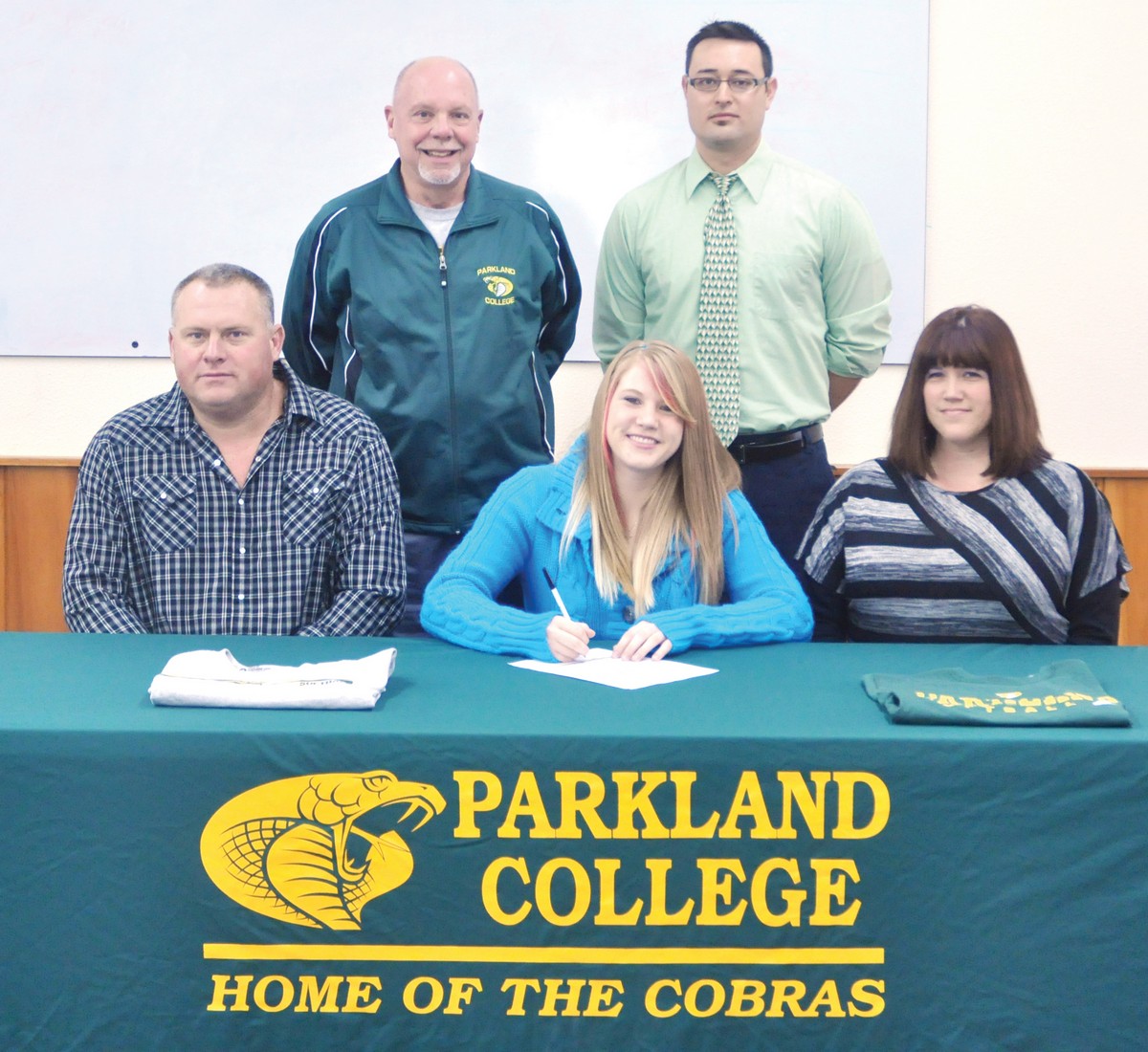 Mulberry Grove senior Harley Tompkins (front row, center) signs a letter of intent to play softball for Parkland College last Friday. She is seated between her parents, Jeff and Teresa Tompkins. In the back row, from left, are: Parkland softball coach Chuck Clutts and Mulberry Grove coach John Barnes.