TEUTOPOLIS – Coaches for both the Vandalia High School boys and girls track teams said many of their athletes can take their experiences from a meet at Teutopolis on Tuesday and learn from them.

After finishing her leg of the 4X400-meter relay, senior Christina Pennington worked her way off the track to the infield to find her coach. She was visibly winded and said, “It hurts.”

Veteran coach Mike Travelstead had a simple answer to that.

“You want it to hurt,” he said. “If you don’t feel it at the end of the race, you haven’t run the race right.”

Pennington, who is not a regular member of that relay team but will do anything her coach asks, helped the 4X400 team achieve its season-best time of 5:08.03 and finish in sixth place.

Sophomore Makenzie Roberts can also look back on Tuesday as a positive meet.

She ran one leg of the 4X800-meter relay and the open 800-meter run, and she finished both races in less than 3:10. After the relay, she said she was hoping to run a half-mile in less than 3 minutes, and Travelstead thinks that is possible.

Sophomore Sierah Ruffner had the girls’ best finish of the day, with a 5-foot leap in the high jump to place second.

During the triple jump, however, Ruffner jammed her dominant knee and was unable to participate in any running events.

Travelstead hopes the injury is not too serious, because Ruffner is expected to contend for the state meet in the high jump and also has a chance to break the school triple jump record of 32 feet, 2 inches.

On the boys’ side, coach Jane Bell was thrilled by the competition that her team faced, and by some of the individual achievements of her athletes.

Sophomore Wade Cowger and senior Daniel Bell opened the 800-meter run with a first lap of about 60 seconds.

They both faded on the second lap, with Bell finishing second (2:09.93) and Cowger third (2:10.33), but they learned the opening-lap pace needed to meet the state-qualifying standard of 2:01.

“That’s important to know,” Jane Bell said. “Now we know what training needs to be done (to get the splits even).”

Freshman Wyatt Beck used even splits to run one of his best miles (6:10) of the season.

Each of his four laps were between 1:25 and 1:35, and Jane Bell said Beck will be able to run the race in less than 6 minutes if he continues to run an even pace.

“He’s a young guy learning how to run each split,” she said. “He is understanding pacing, but you also need to do even splits.”

Junior Quenten Austin, who finished second in a very competitive 110-meter hurdle race which saw the top four finish within six-tenths of a second of one another, won the 300-meter hurdles in 0:42.13.

Austin had consistent splits between the first several hurdles, tailing off by about a half second on the final two, but Jane Bell said a little extra conditioning will allow him to run each hurdle consistently. 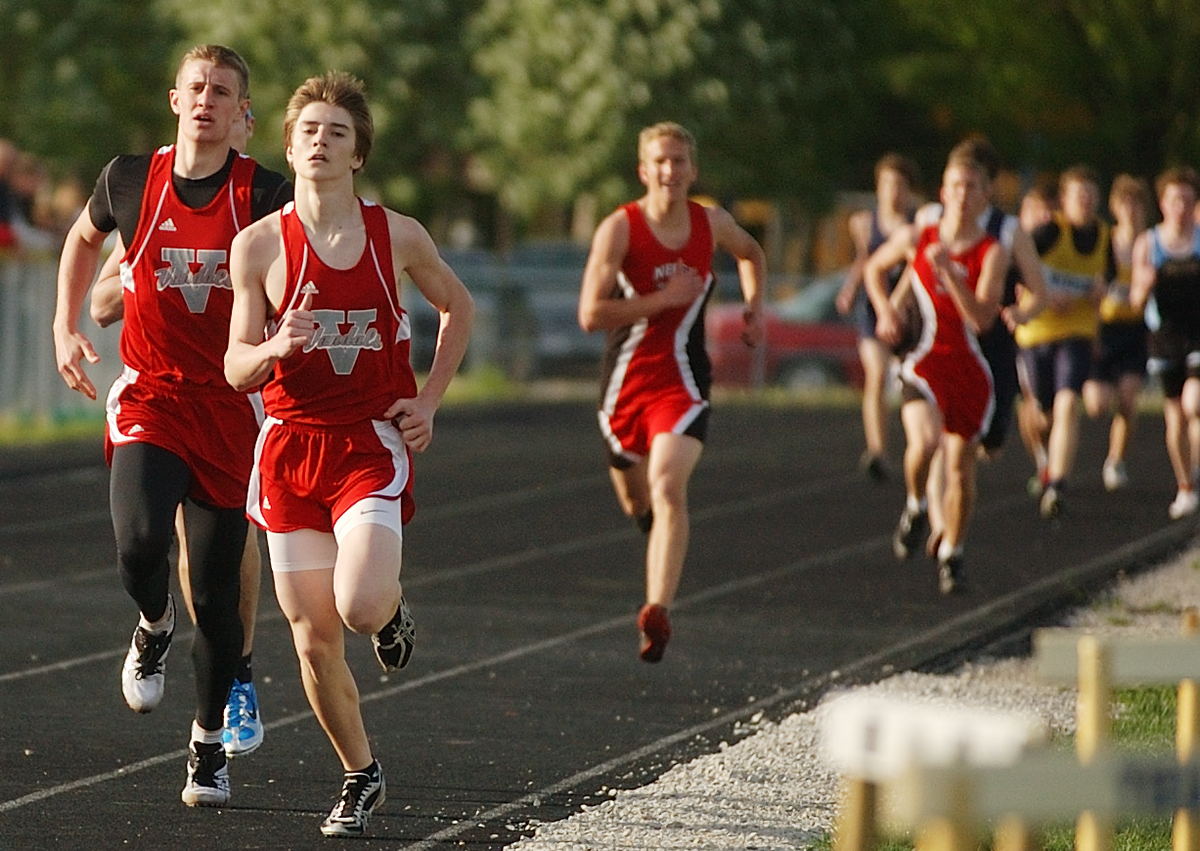 Vandalia senior Daniel Bell (left) and sophomore Wade Cowger (second from left) started the 800-meter run at Teutopolis at a blistering pace, each running the first lap in about 60 seconds.

Sophomore Makenzie Roberts (right photo) ran two 800s at the meet, finishing both in less than 3:10.