Shelbyville scored four runs in the top of the first inning and then no-hit the Vandalia baseball team last Thursday during a 9-1 win.

The Vandals did draw seven walks while showing good discipline at the plate through the middle innings, working full counts in 8-of-9 at-bats in the second and third innings. In the fourth inning, Vandalia earned four free passes to score their lone run.

Sophomore Matt Campbell was credited with the RBI after drawing a four-pitch walk to score junior Trevor Montgomery.

In those same innings, just one Shelbyville batter reached base, and coach Luke Hohlt said those three innings can be used as a motivator for the team.

“Those are confidence-builders,” he said. “When you have innings like that, the guys have to look back and see those, and build on them.”

Sophomore Leyton Godoyo, the team’s center fielder, also had a confidence-boosting game, according to Hohlt.

The speedy Godoyo recorded three outs and nearly had a fourth when he made a diving attempt on a ball hit to deep center.

“He’s going to be able to catch any ball,” Hohlt said. “He’s a nice center fielder, but he needs to get more confidence.

“He played like a center fielder should play (today). He misread that one ball, but he made the other plays and that’s what we need from him.”

Hohlt also noted that he has seen general improvement from many of his leading offensive players.

Juniors Dathan Berning, Montgomery, Ian Murrell and Nick Metzger are all important players to Vandalia’s lineup, and Hohlt said he can see those players getting more comfortable in their roles, both as players and leaders.

“Talking about stuff and doing things are different,” Hohlt said. “They are starting to understand that, and that’s great to see.”

And that, Hohlt said, should translate into some victories.

“Did we get what we wanted from the plate? No,” he said. “But we hit the ball solid a few times. Like a lot of teams around here, if one guy is hitting, the rest are hitting.

“We’ll come around. We have shown that we can hit the ball, and we’ve had great innings of baseball.”

Vandalia at EAWR
The Vandals ended a four-game losing streak with a 5-0 win against East Alton-Wood River on Friday.

The game was originally scheduled to be played at EAWR, but weather conditions moved the game to Vandalia.

Murrell pitched a complete game, allowing just four hits while striking out five and walking none.

Defensively, the Vandals did not commit an error.

Senior Matt Hoffman and Godoyo both were 2-for-3 during the game, and as a team, the Vandals had nine hits. 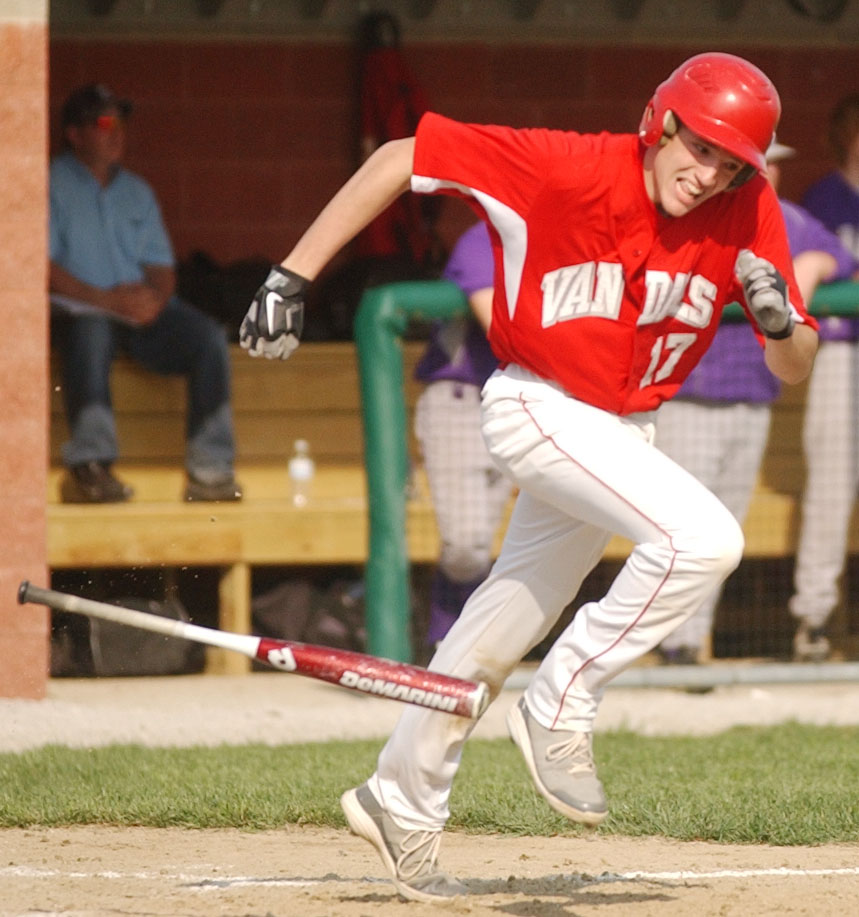 Junior Trevor Montgomery rushes out of the batter’s box after hitting a ground ball against Shelbyville last Thursday.