Vandalia’s Megan Godoyo did not deny that she is happy that she threw a no-hitter at St. Elmo last Tuesday, but she made it very clear that helping the team get a victory was more important.

“It’s always more important to me to get a win than it is how good I pitched,” the freshman said. “Yeah, it was good (to throw a no-hitter), but at least we got a win.”

Godoyo said she wasn’t pitching any differently against the Lady Eagles, but coach Brian Buscher said it was her pin-point control throughout the game that prevented St. Elmo from getting a hit.

Two St. Elmo players reached on errors and two others drew walks, but those were only blemishes on Godoyo’s stat line during a 6-0 Vandalia win.

“She was very accurate,” Buscher said. “It is so hard for the pitcher (at any level) to be on all the time, and she didn’t hit every spot, but she got away with some balls with swings and misses.”

Godoyo has pitched in 13 of the team’s 14 games this season, striking out 106 batters in 79 innings pitched, which is a testament to her ability to throw strikes.

When opponents do put the ball in play – she holds them to a .175 batting average – Godoyo said she has 100-percent confidence in the defense behind her, which has a fielding average of .925.

“Every game, I just think about throwing strikes to make the other team hit the ball, because I know my defense is behind me,” Godoyo said. “I wasn’t doing anything different against St. Elmo.”

Her approach did change slightly in the bottom of the seventh inning, however, because that was when she realized she hadn’t allowed a hit.

“I had an idea, but at one point, I thought they had one hit,” Godoyo said. “(Before the seventh) my mom told me I might throw a no-hitter, so I was kind of nervous.”

Those nerves didn’t change the outcome, as she induced two ground-ball outs and, appropriately, struck out the final batter to cap the milestone.

She had 11 strikeouts during the game and the Lady Eagles grounded out six times.

“She was putting her pitches where she wanted to, got them to ground out and the defense made plays,” Buscher said.

“She just got better as the game went on,” he said. “She really got in a nice rhythm and threw a darn good game.”

Godoyo also had a strong day at the plate, going 2-for-2 with two singles, two walks and three runs. On the season, she is batting .422 and has reached base in half of her plate appearances.

That, combined with her pitching, has helped the Lady Vandals to an 8-6 record this season, and as she blends in with some of the other young players on the team, it creates a high ceiling for Vandalia softball.

It might even include more no-hitters from the ace.

“She has the potential to do that every time she pitches,” he said. 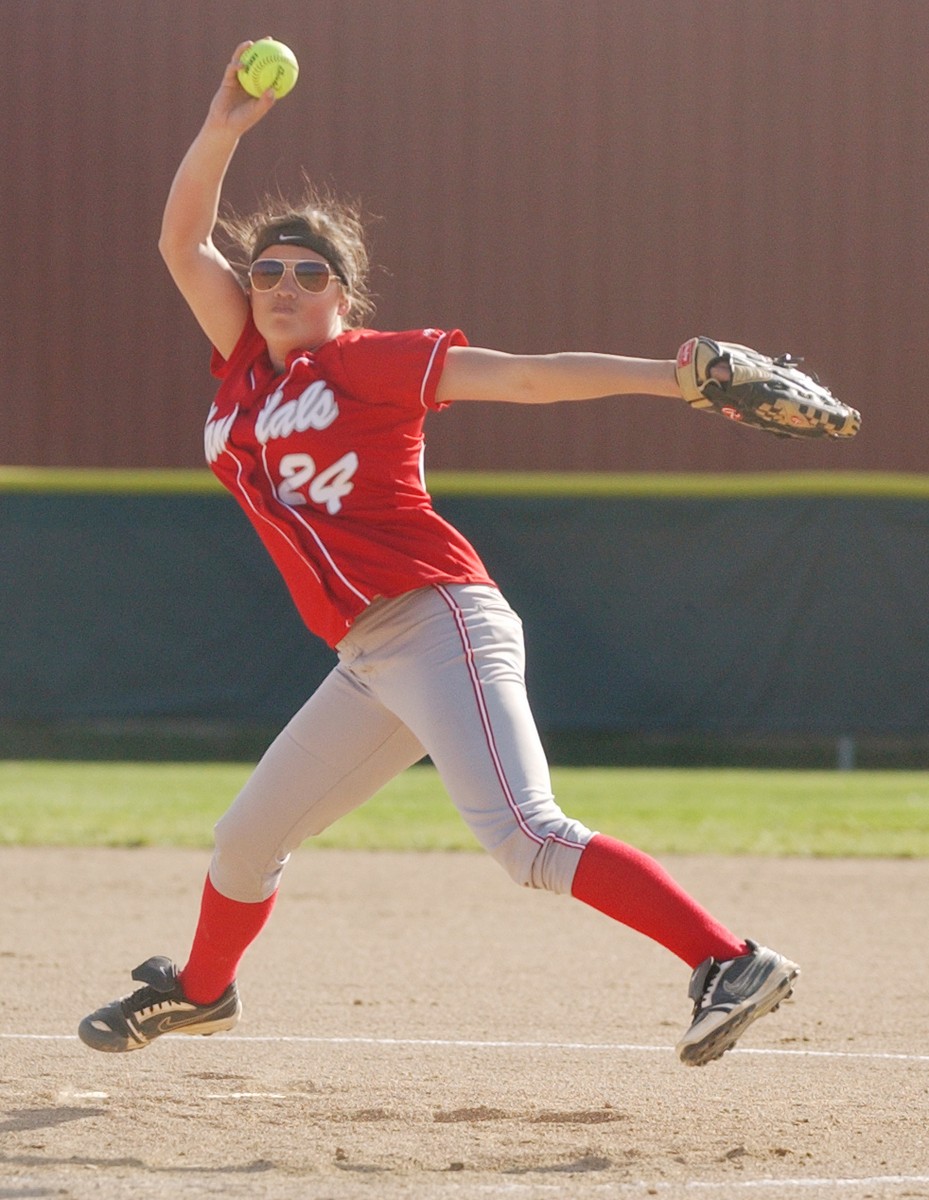 Freshman Megan Godoyo fires a pitch during a loss to Breese Central last Wednesday, one day after throwing a no-hitter at St. Elmo.