As Whitney Newsom led off the bottom of the seventh inning against Teutopolis last Thursday, Vandalia coach Brian Buscher was scrambling to find a pinch runner in the event Newsom got on base.

“I sent (sophomore) Amber Bruno to get two JV girls, because I thought, ‘All right, she’s going to get a base hit, and I have to decide whether or not to sub in a runner,’” Buscher said.

“I got Kylie Sellers to run for her and got Lauren Wasmuth to sub in to play third. I was stressing out about that.”

Sellers pinch-ran for Newsom in the second inning, so if Newsom were to leave the game again, she would be unable to return for extra innings if the 1-1 tie wasn’t broken.

Just as Buscher planned, Newsom got a hit.

But she didn’t need the pinch runner.

The senior had crushed the second pitch of her at-bat, and sure enough, it did go, sailing over the right-center field fence for a walk-off home run and a 2-1 Lady Vandal win.

It was Newsom’s second home run in two games. She hit a grand slam during a loss to Newton last Tuesday.

But she almost didn’t need the home run against the Lady Shoes.

Both runners scored, but the ball got trapped by the fence and was ruled a ground-rule double, meaning Newsom had to retreat to third base, where she was stranded.

Godoyo – who pitched a complete game to notch her fifth win of the season – continued carrying Vandalia’s momentum, though, by retiring the Lady Shoes’ next three batters in 11 pitches.

Sara Kroeger – who had both of T-Town’s hits – drove in a run with a double in the sixth inning.

“I had just moved (center fielder) Morgan Whightsil (before that hit), so if it’s anybody’s fault on that base hit, it’s probably me,” Buscher said.

The Lady Vandals were unable to get a base runner in the bottom of the frame, but Godoyo again quickly dispatched the Lady Shoes in the seventh to set up Newsom’s homer.

Put it in play
In the 22 plate appearances for the Lady Vandals, there was only two strikeouts and one walk.

Making solid contact was one Buscher’s top priorities for the game.

“Up and down the lineup the girls put the ball in the play,” Buscher said. “Some weren’t hitting the ball on the screws, but they were all hitting.”

Every player put the ball in play at least once, with four of them recording hits.

Newsom and Donaldson had back-to-back singles to open the inning, but senior Amy Walton followed with a line drive to first.

The first baseman then stepped on first for the second out and fired to second to beat Sellers – who was pinch running – back to the bag.

“The rule is that on the ground you have to go; line drives, you’re supposed to freeze,” Buscher said. “Both our runners went, lost their footing and couldn’t get back.”

That play, however, did not discourage Vandalia. Godoyo struck out two batters in the top of the third inning.

“There were a lot of situations where they could have been put their heads down, but they stayed positive the whole time,” Buscher said.

Notes
Whightsil had plenty of chances in center against the Lady Shoes, recording four putouts; three came from the leadoff hitter … Godoyo recorded eight strikeouts and zero walks in a complete-game effort … Teutopolis showed good discipline at the plate, as 12 of its 25 plate appearances lasted at least five pitches; the Lady Vandals had just four such at-bats … Vandalia’s JV team was defeated, 16-1, in four innings; sophomores Paige Ehrat and Abby Dugan both had hits.

Vandalia at St. Elmo
Godoyo threw a no-hitter at St. Elmo on Tuesday, as the Lady Vandals defeated the Lady Eagles, 6-0.

The freshman walked two, and the defense had two errors to allow four St Elmo base runners; she struck out 11.

Godoyo was also 2-for-2 with three runs on offense.

Bruno and senior Amy Walton both had two hits, as well.

Vandalia at Woodlawn
The Lady Vandals were swept at a doubleheader in Woodlawn on Saturday.

Donaldson hit a three-run home run in the sixth, but the Lady Vandals trailed 9-0 before her homer.

The next inning, Donaldson doubled in Vandalia's fourth run.

Godoyo scored twice and had two hits in the game. She took the loss in the pitcher's circle, throwing six innings and striking out six.

In game two, Vandalia left the bases loaded twice and stranded several other runners, while the Lady Cardinals scored three times in both the fifth and sixth innings to take the win.

Bruno was 2-for-3, and Ehrat had a double for the Lady Vandals.

Godoyo and Whightsil both had triples and combined to cross the plate four times and steal three bases.

Freshman Taylor Well had a two-run double during a five-run fifth inning. 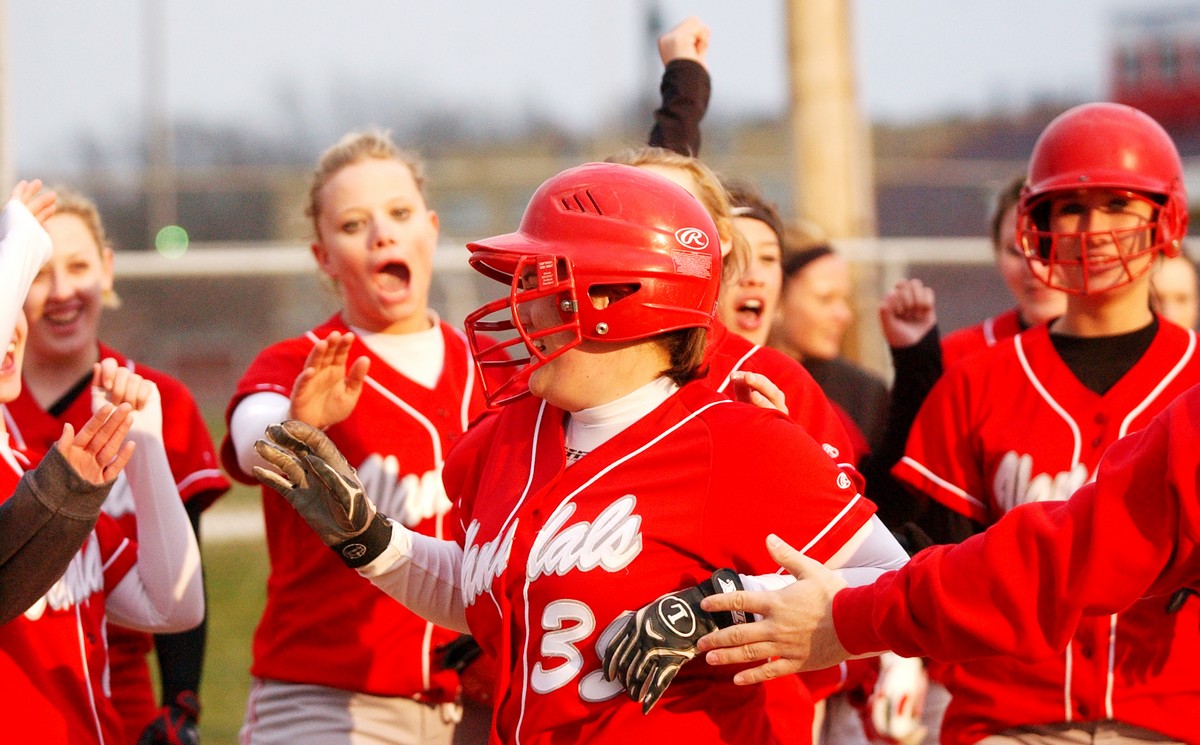 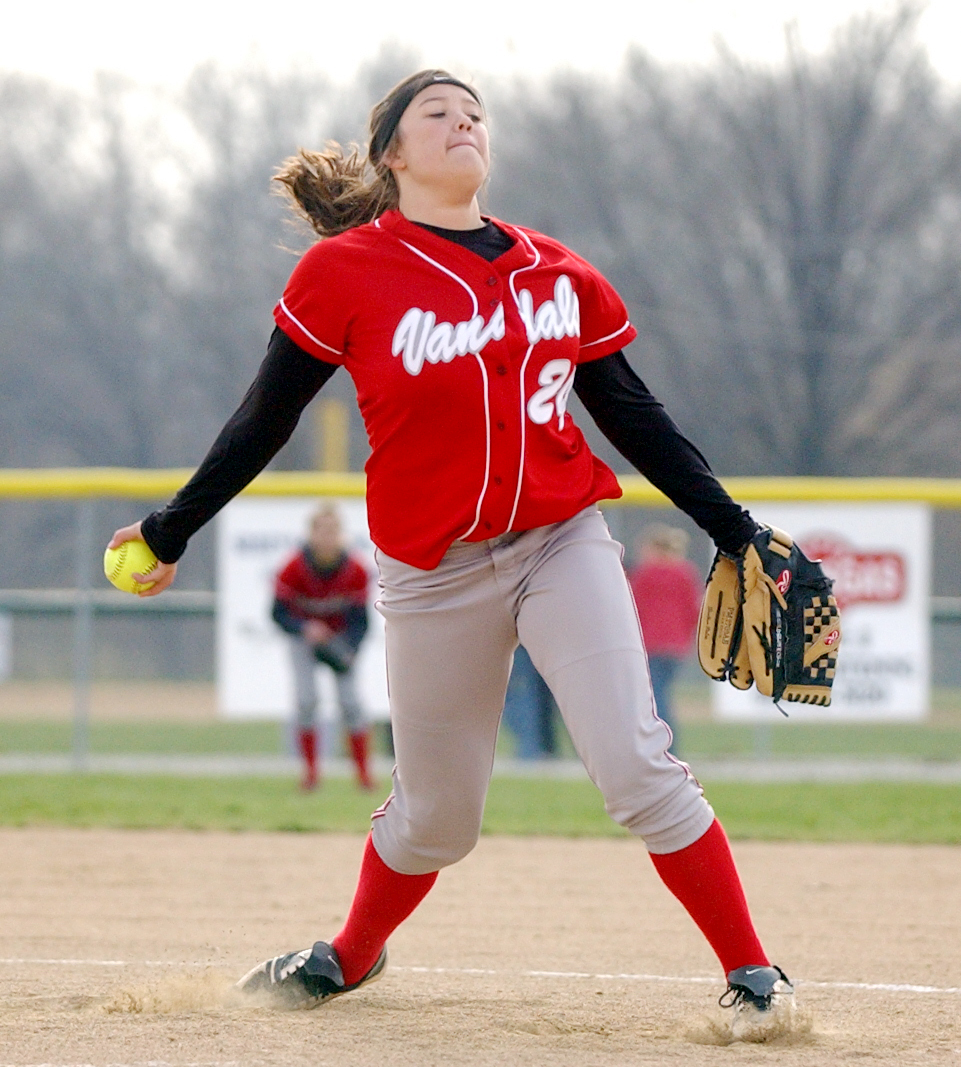 Freshman Megan Godoyo unleashes a pitch against Teutopolis last week. She pitched a no-hitter against St. Elmo on Tuesday. 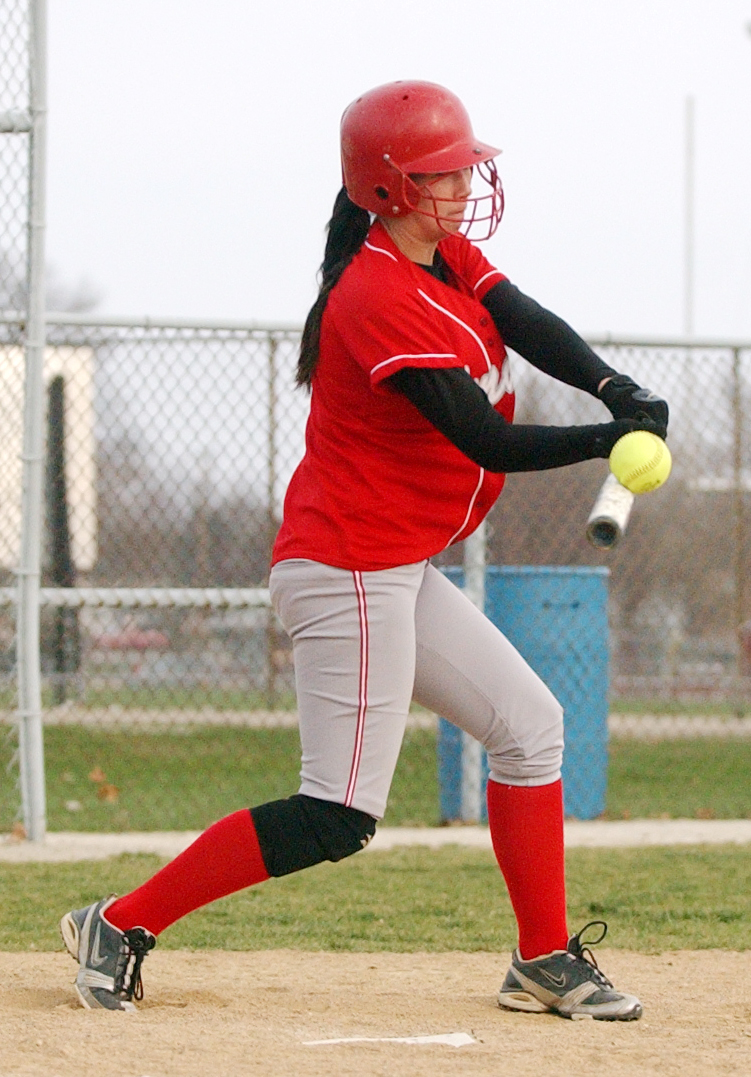 Senior Audra Donaldson makes contact during a game against Teutopolis last Thursday. Donaldson has been a consistent hitter for the Lady Vandals this season.