It’s not often that agriculture producers get to see the end-users of their labors. But that’s exactly what Fayette County elevator owner Ken Cripe saw recently when he traveled to Central and South America on an Illinois Farm Bureau study tour.

The owner of Cripe Grain of Bluff City was one of a dozen Illinois farmers selected to participate in a recent weeklong trip to Panama and Columbia to get a first-hand look at U.S. agricultural trade there.
The group’s trip started in Bloomington on March 8. From there, they drove to Chicago and boarded a plane to follow the route of Illinois grain – down the Mississippi River to New Orleans, across the Gulf of Mexico, through the Panama Canal and to the ports of Columbia.
“We got to see the whole trip that grain goes on in its journey from Illinois to Columbia,” Cripe said. “We watched grain being loaded into containers in Chicago, saw barges on the Mississippi River and saw it loaded onto ships as it traveled through the Panama Canal and on to Columbia.”
One of his favorite spots on the tour was the 51-mile-long Panama Canal. There, he was able to watch ships going through the two existing sets of locks, and also saw a third set being built by Panama. The new one will be able to handle larger ships. According to information given to him, about 65 percent of canal traffic is by United States ships.
The Farm Bureau tour members also witnessed the inequities of tariffs charged on U.S. grains imported into Columbia. Typically, the corn, soybeans, soy meal, wheat and cotton produced by U.S. farmers have a tariff tacked onto their price, while the Columbian products imported into the U.S. (coffee, cut flowers, bananas and sugar) face no such tariffs. That puts American-grown products at a distinct disadvantage compared to other grain-producing countries.
“I was surprised that the products imported into the U.S. from down there have no tariff on them,” Cripe said, “but we have to pay from 15 to 30 percent on our products that we export to them. As a result, in the past two years, we’ve lost 50 percent of our corn exports to Columbia.”
As a result of the trip, Cripe said, the Illinois Farm Bureau last week sent a letter to President Obama and the Illinois congressional delegation, urging them to level the playing field by passing a U.S.-Columbia Free Trade Agreement.
While in the capital city of Bogota, Cripe was impressed with the country’s attempts to upgrade its infrastructure.
“They’re building all kinds of things – roads, bridges and  new buildings,” he said. “The cities are very modern. But you don’t have to get very far out into the rural areas and it’s like a third-world country.
“It was a real honor to go,” Cripe said, “and it was very educational.” 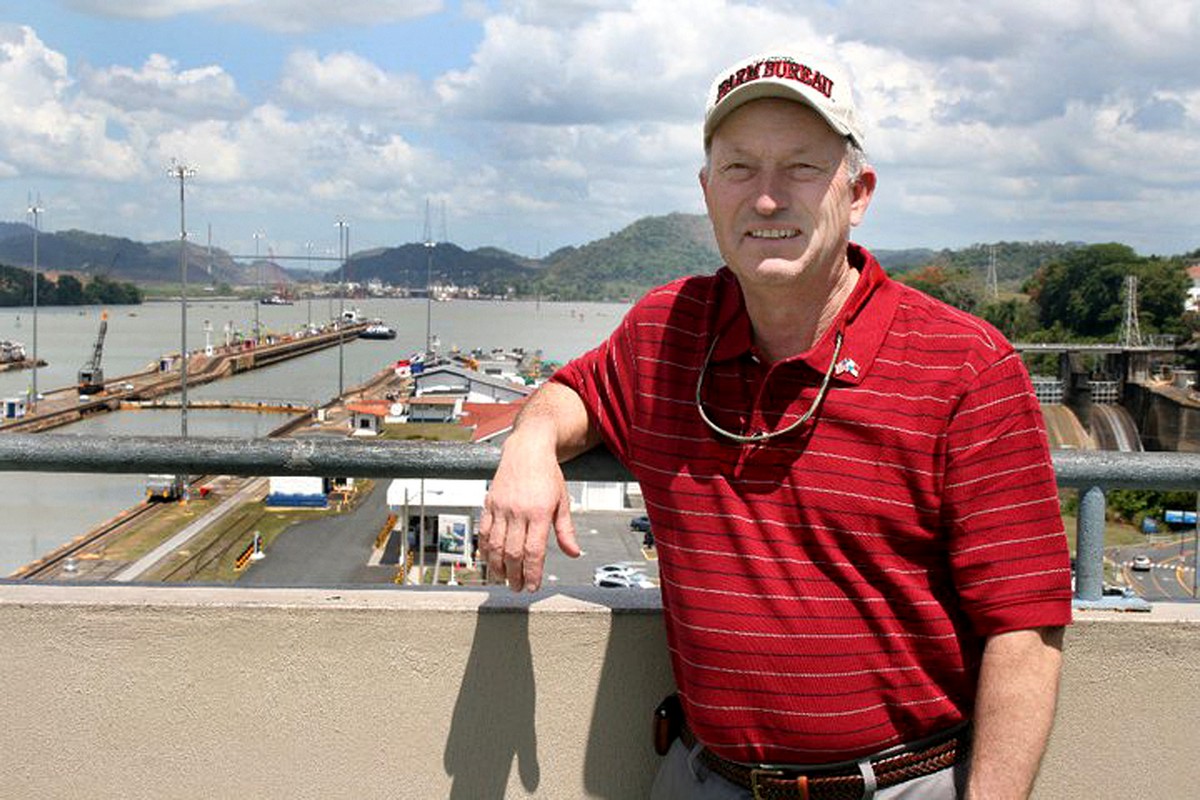 Ken Cripe, owner of Cripe Grain in Bluff City, is shown at the Panama Canal during a recent trip to Central America sponsored by the Illinois Farm Bureau. The group basically followed the route of Illinois grain exports from Chicago to New Orleans, to Panama and to Columbia.