St. Elmo started the season 4-13, and at times, struggled to score 40 points in a game, leaving coach Greg Feezel unsure of how to get his team, which he felt was talented, onto a winning streak.

He never gave up on his players, however, guiding them past top-seeded Altamont last Wednesday to propel them into the regional title game, which the Eagles won, 40-35.

“I think we went to T-Town (on Feb. 14) and played them tough, and decided to go 6-0 the rest of the year to get to Altamont (for sectionals),” Feezel said. “The kids are determined, and they’re paying attention.”

Early in the first quarter against North Clay, however, it didn’t seem like that was the case on offense.

The Eagles turned over the ball four times in the first four minutes of the game, but stout defense allowed the Cardinals to hold just a 4-0 lead with 3:41 left in the period.

“We were living in fear they would score,” Feezel said. “We don’t score much (43.75 points per game), so we have to defend as hard as possible. We work our fannies off doing it, and these guys expended the effort tonight.”

The Eagles continued the barrage, scoring the first five points of the second quarter, and during the overall run, six different St. Elmo players scored. North Clay, however, followed that up with a 6-0 run of its own to move ahead, 16-14.

Two free throws by senior Kase Stolte with 1.7 seconds left in the first half gave St. Elmo a 19-18 lead at halftime.

For the first 10 1/2 minutes of the second half, neither team would lead by more than four points. Close games are nothing new for the Eagles, who this season have been in 12 games decided by eight or fewer points.

“I’ve got to believe we know how to play in these games, but I wish they wouldn’t do this,” Feezel said. “This gray hair is not right. I’m not that old, yet.”

Junior Ben Sperry grabbed a defensive rebound, one of his 12 in the game, and made two free throws on the offensive end to give the Eagles a five-point lead with 3:37 left in the game.

Bryan Harrington made a 3-pointer 40 seconds later to cut St. Elmo’s lead to three, but juniors Jake Mansker, Blaine Scholes and Blake Pruett, and sophomore Connor Beasley combined to make 7-of-10 free throws in the final 2:15 to secure the overdue regional championship.

“In the fourth quarter, we really played like I thought we should,” Feezel said.

At Altamont, the Eagles met Woodlawn (26-3) on Wednesday. The winner of that game advanced to play either Neoga or Red Hill on Friday at 7:30 p.m.

Results of Wednesday's game will be posted at www.leaderunion.com.

If anyone wants to see the Eagles succeed in Altamont, it’s Feezel and his assistant Ryan Beccue.

“They’re about like my own kids,” Feezel said. “I think they realize they have two coaches here who care a lot about them.” 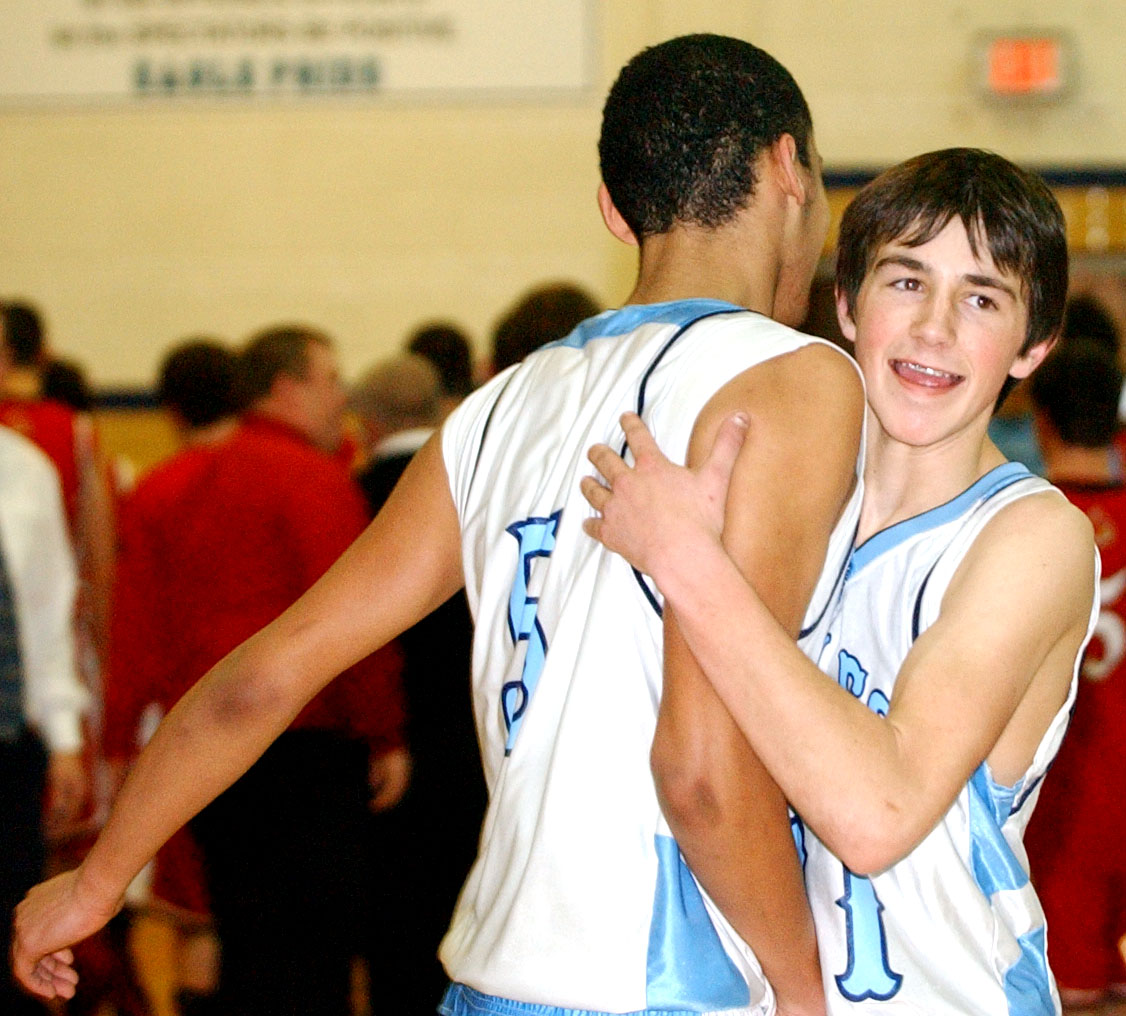 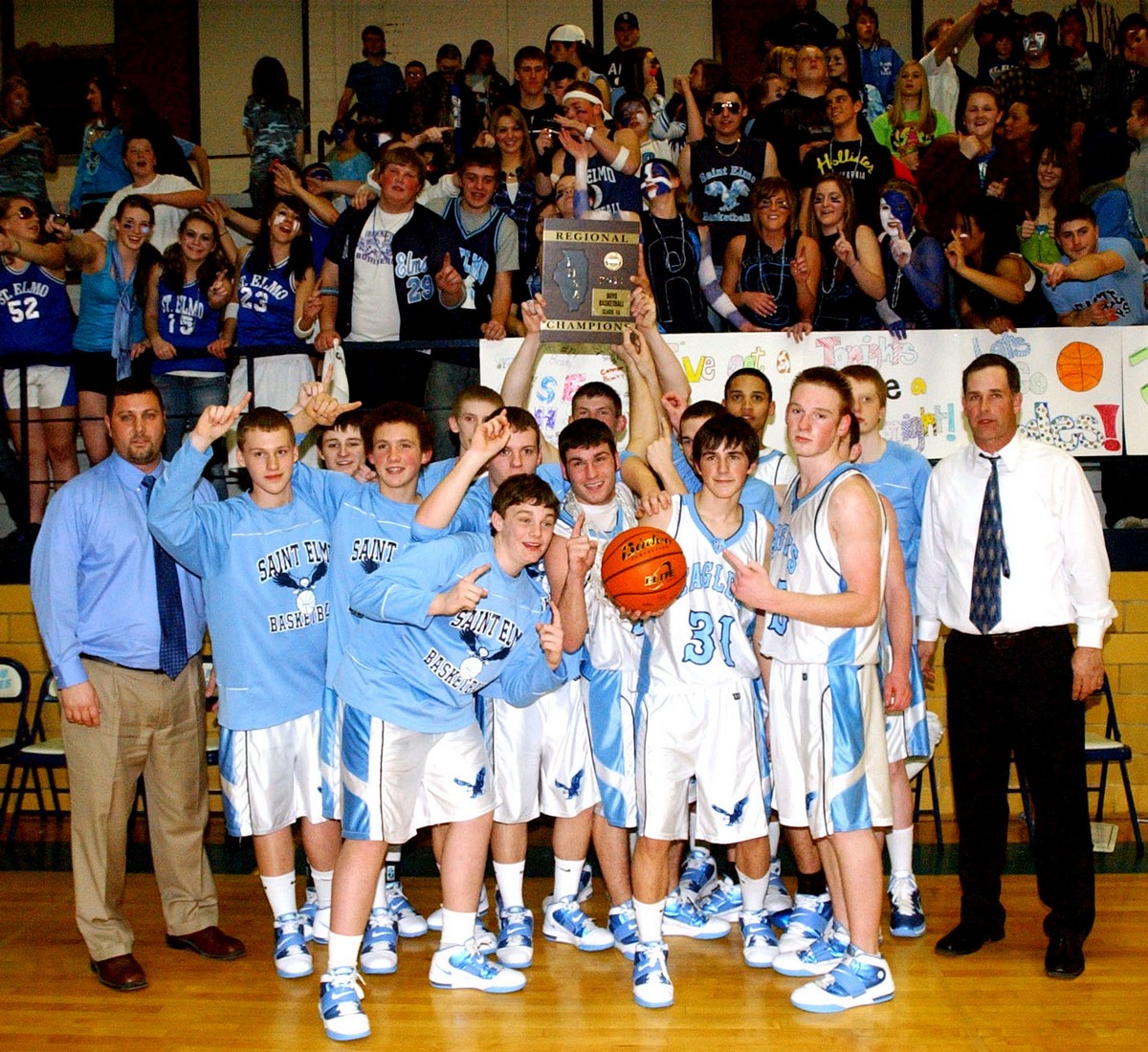 The St. Elmo Eagles hold their regional championship plaque in front of the student section after beating North Clay, 40-35, on Friday. 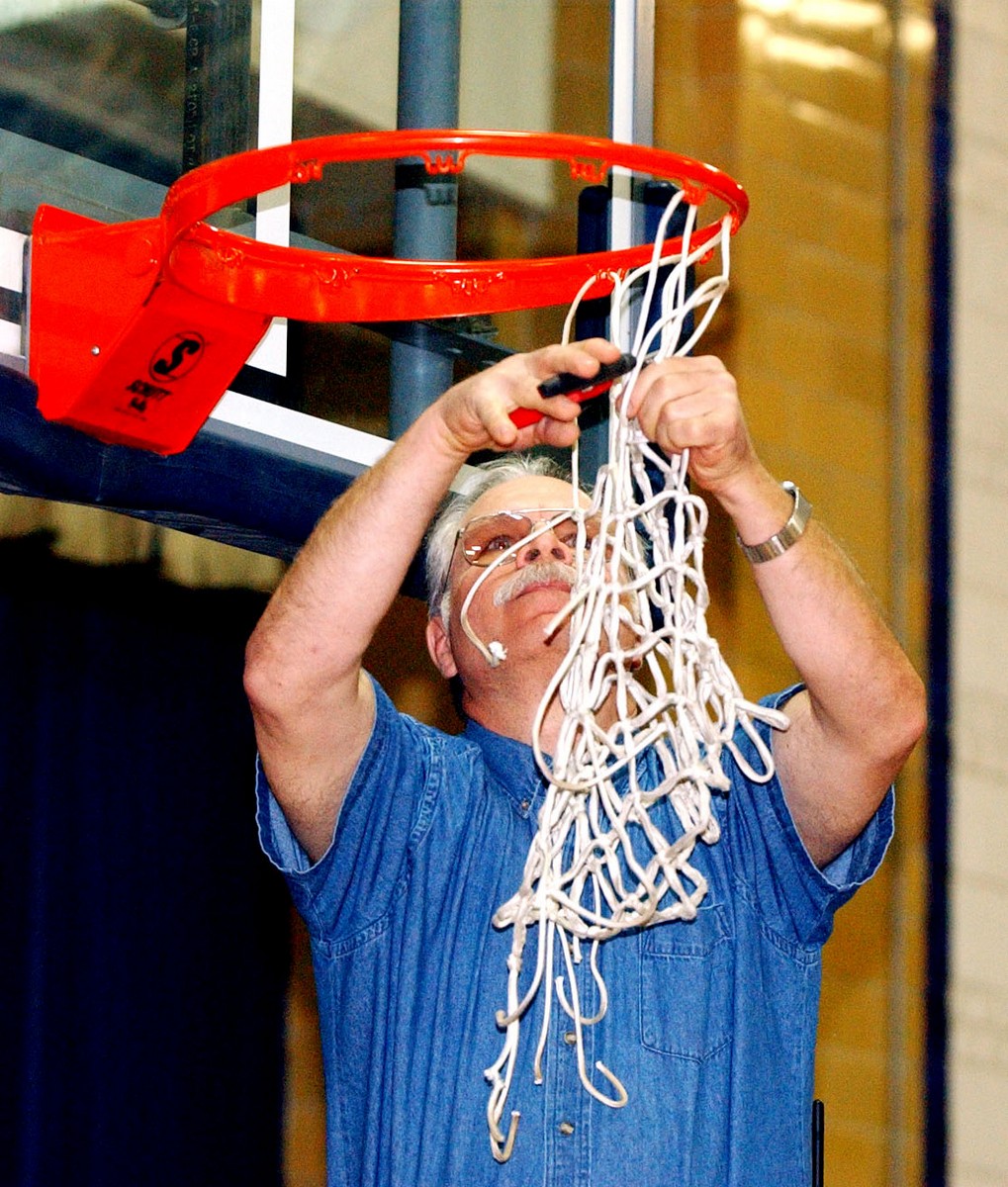 A St. Elmo custodian cuts down the net after St. Elmo defeated North Clay, 40-35, to win the regional championship on Friday. 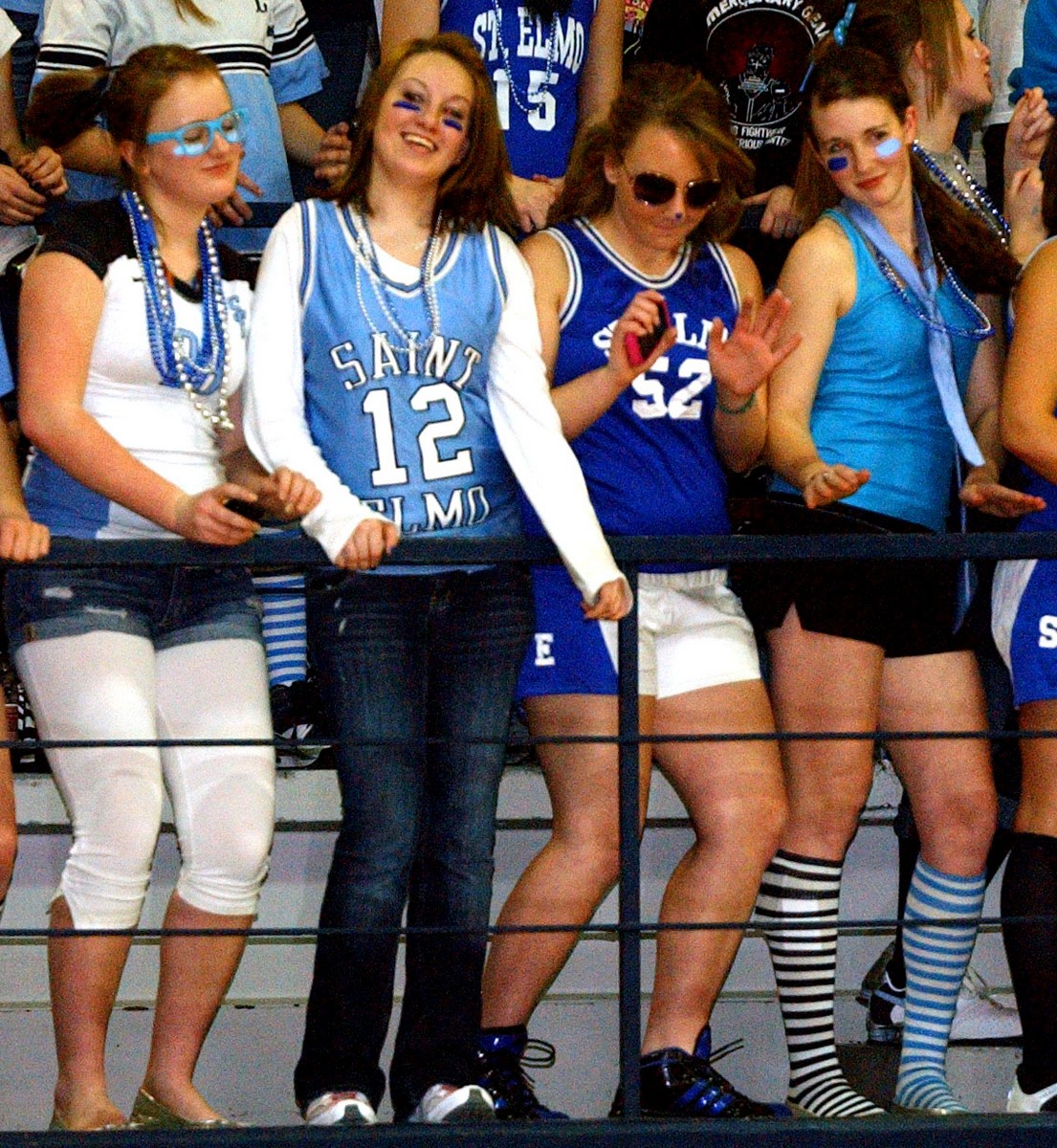 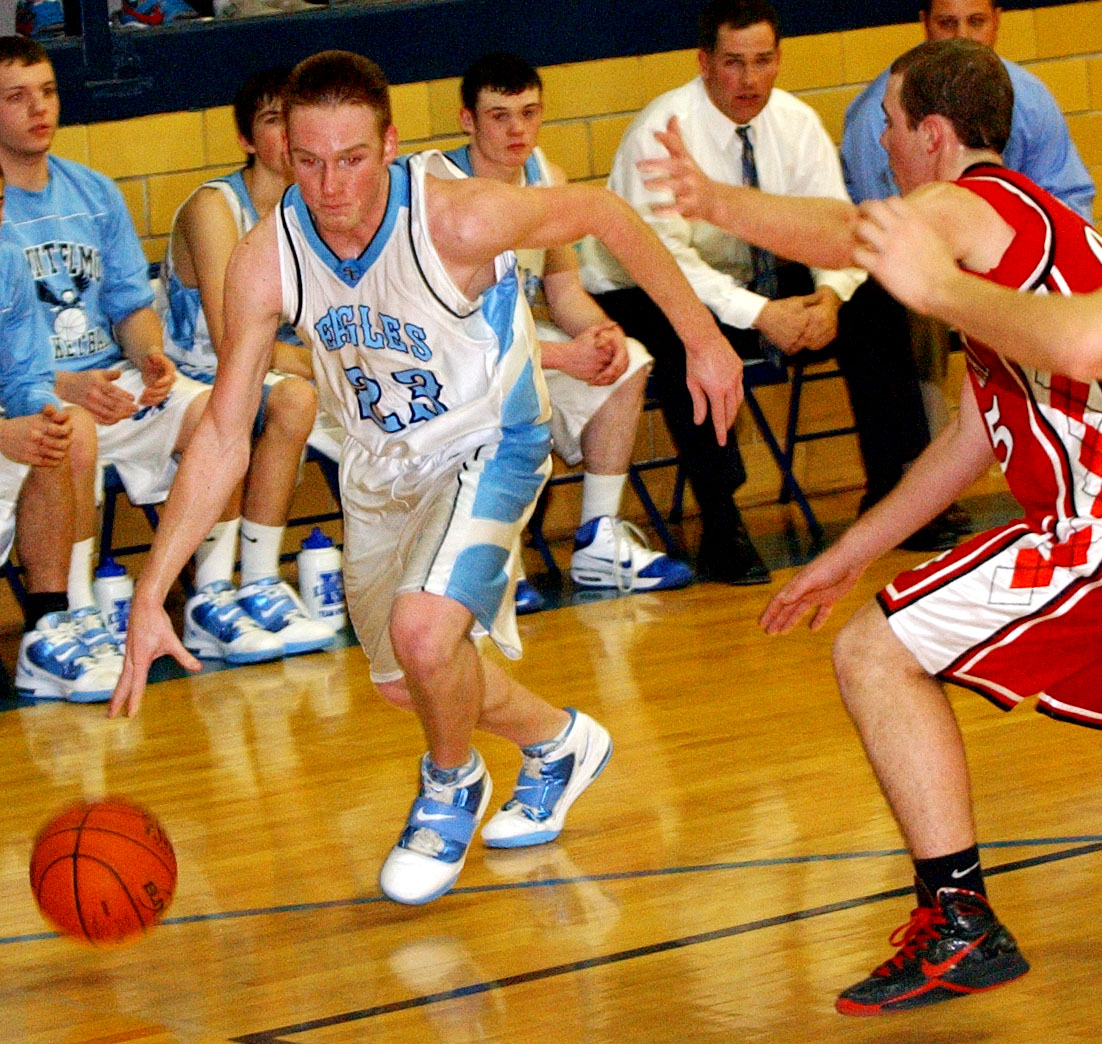 Junior Blake Pruett dribbles around a North Clay defender during St. Elmo’s 40-35 win on Friday. More photos from the game will be available in Thursday’s This Week in Sports photo gallery.