Ivan Swofford is friendly and upbeat, has a quick, ready smile and laughs easily at something humorous.

Confined to a wheelchair, he lives contentedly at Vandalia Rehabilitation and Health Care Center. He likes to participate in most activities and games, and seems to have a happy song in his heart. There seems to be no indication of bitterness or regret in his demeanor.
A lot of people know him, and many have known him for years as a talented musician, but not everyone realizes that Swofford is one of our country’s heroes.
Serving with the U.S. Army engineers,  he returned home from the Korean War (1950-53 conflict with the United States) with a head wound, shoulder wound and the amputation of a leg due to an enemy mine. He also blew up an enemy tank that actually ran over him.
Meet, or get re-acquainted with, Ivan Swofford, a man who played music (mandolin, guitar, five-string banjo, ukulele and harmonica) with some of Fayette County’s best, and is also an unsung American hero.
In the Beginning…
Ivan was born to Lawrence and Oma Swofford in Pittsburg in 1929.
“I was born south two miles and east a half mile of the Pittsburg Store, up on a hill, looked right off into a lake,”  he said.
He had brothers and sisters. “My half brother was killed in the Philippines, in the death march.
“My mother was pure (native American) Indian, and my dad was three-quarters Indian,” he said.
He enjoyed hunting and fishing out of the Kaskaskia River. Crappie is his favorite fish to eat. He recalled a foul-smelling fish bait called cotton seed cake.
His Music – His First Love
Swofford played with the late Floyd Staff’s band, Kenny Eyman and the Eyman family, and Lyle, Doris and Lane Mayfield.
“We played at cemetery picnics, Noffsinger, Scott’s Grove, Taylor. We would play at Seminary School and have square dances every Saturday night.”
Ivan has good memories of his introduction to music. “My mother taught me how to play the ukulele when I was 5 years old,” he said. “She taught me the chords and bluegrass."
He lost his mother at a young age, but she left him a legacy of music he still enjoys. His father lived to be 90 years old.
An Army Engineer in Korea
Swofford shared some of his memories of Korea.
“A Korean tank ran me down,” he said. “The only thing I could do was to lay down flat and let the tank run over me.
“I stayed in the middle, with the tank’s tracks on each side. Whenever they got to the end of it, I laid me a bomb up on it and the tank kept going. I got away from it. The bomb went off and it knocked the tank out.”
“I got hit in the head with a burp gun. It shot me in the head and came out my mouth,” he said, and imitated the rat-a-tat sound of a burp gun. He also has a rod in his right arm where he was shot.
He lost his right leg when he stepped on a mine. “I got on a box mine,” he said. “All I could do was jump, and when I jumped, it blew my leg off. Some of the medics were there to help me. One of the medics was named Medina,” he recalled.
Ivan wasn’t sent home, or even away from the battlefield. “There wasn’t anyone to replace me, so I was still there three days in battle after the medics helped me,” he said. When asked, he said he had received a Purple Heart and Bronze Star, but wasn’t sure where they are now. He served in the Army engineers for three years.
Back Home…
Following his discharge from the service, he came back home, “to farm the river bottom, back to the banks of the old river,” he said.
Despite missing his right leg, he returned to help his dad farm. Although he had a prosthesis, he found it easier to farm and operate the farm equipment without it.  Seeming to regard it as an inconvenience, he said, “It (leg) didn’t hurt, because it was callused.”
Acceptance and Therapy
There were surely acceptance and adjustments that Ivan Swofford faced in the injuries, the loss of his leg and of a divorce ending his marriage. He has a daughter, Sherrie, and a son, Ivan.
Different people cope in different ways. Ivan Swofford was and is tough.
Although missing a limb, he overcame the hurdles in his life, both personal and those caused by the war, and takes life a day at a time, participating and  enjoying it.
A large part of Ivan’s therapy and solace was found in the legacy that his mother left him-his music.
He still has a guitar he had especially made for him when he was with the bands. It is an acoustic guitar, but can also be connected to amplifiers.
Although he said he can’t play music anymore, as he posed with his guitar for a picture, his fingers moved on the strings as a song was playing on a nearby piano. 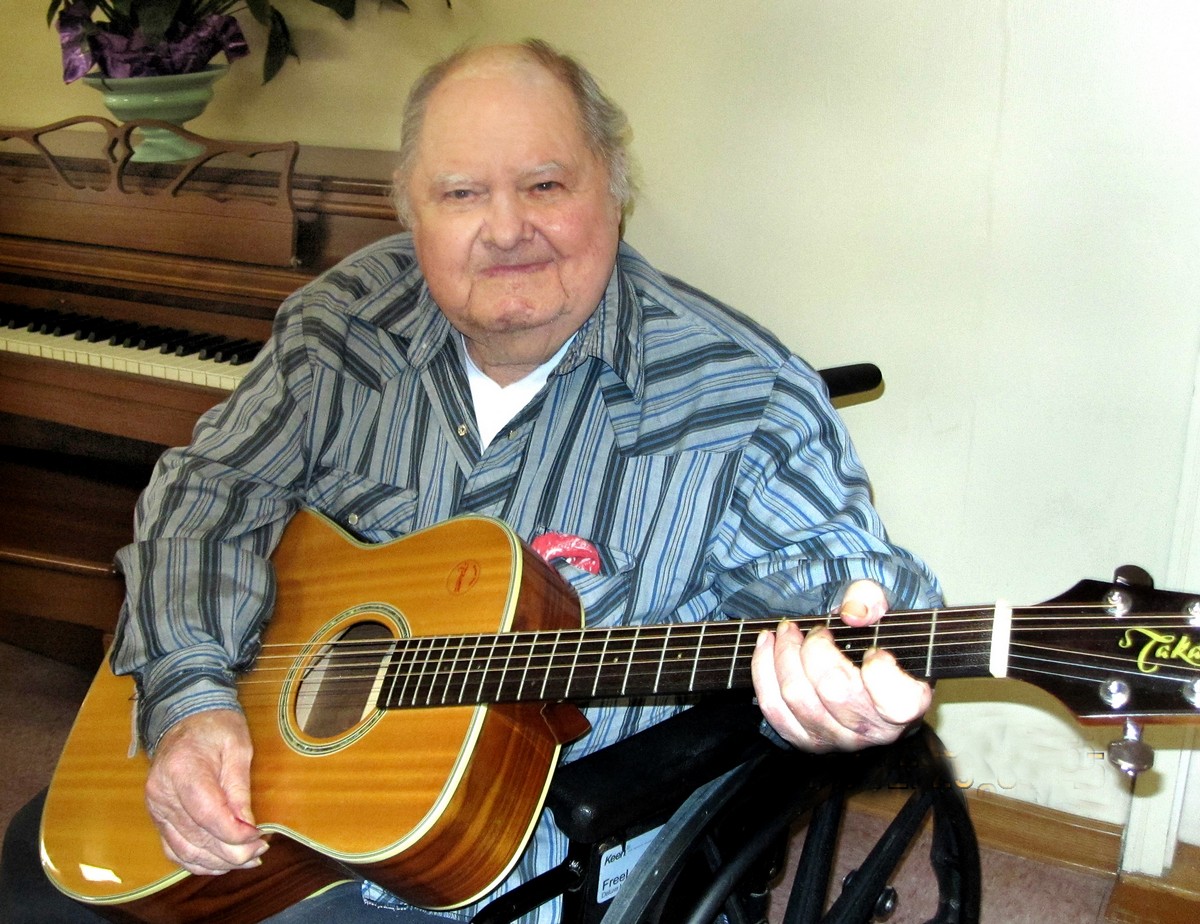