The town square around the state capitol, usually quiet at this hour, is alive with the sounds of horse-driven carriages, spoken greetings, conversations and the laughter of men and women
The street lamps’ flickering lights cast highlights on the ladies’ beautiful ball gowns of shimmering silks, taffetas, moirés and brocades in jewel-toned hues.
White kid leather or cloth gloves protect their hands, and, as propriety dictates, the gloves will be removed only for taking refreshments throughout the evening
The many yards of fabric swish and whisper over their hoops and petticoats as the women discreetly hold the skirts of their gowns and step carefully onto wide boards that have been placed on walkway areas because of the lingering snow on the frozen dirt streets.
Of course, the ladies are assisted gallantly by their escorts, dressed in black-tailed coats, waistcoats, cravats and white gloves.
The date is Feb. 11, a very special date, as it’s the day that president-elect Abraham Lincoln left Illinois for Washington, D.C., for his inauguration.
It was also the day that Jefferson Davis traveled to Montgomery, Ala., to accept the presidency of the Confederate states,
It was a time of celebration and gaiety – a good reason for a wonderful Victory Ball, an event that could have very well taken place here, at the site of the state capitol, where president-elect Lincoln began his legal and political career.
Lincoln Victory Ball
This Feb. 11, thanks to Connie Bolyard’s love of history and community – and others who share her enthusiasm and vision – a Lincoln Victory Ball will be held at the Vandalia Moose Lodge.
The doors will open at 7 p.m. to a gaily decorated building, perfect for a grand ball.
“This has been a dream of mine for a long time,” Bolyard said. “About 32 years ago, during a Grande Levée, I thought, ‘Oh. My goodness, wouldn’t it be great if they had a ball.’
“When I realized (this year) was the 150th anniversary of (the start of) the Civil War,  I got to thinking that Vandalia needs to have a Civil War Ball and celebrate that anniversary.”
She told Mary Truitt of her idea and the idea took wings and feet. Among those getting on board with their support were sponsors Vandalia Historical Society, The Leader-Union, St. Elmo Banner, First National Bank of Vandalia, Dr. and Mrs. Brian Dossett, and WPMB-WKRV Radio, and re-enactors Kati Long of Sparta and Brian Garner of Vandalia.
Come One, Come All
to the Lincoln Victory Ball
There will be ladies and gentlemen dressed in the styles of 1861. Everyone is encouraged to dress in period clothing, but it is not mandatory.
The ladies demonstrated at the recent style show, held at the Mother of Dolors Catholic Church Parish Center, that their dresses could have come right off the pages of Godey’s Lady’s Book of February 1860, or from Peterson’s magazine of July 1860.
However, the “ball gowns” do not have to be as elaborate as described. Bolyard said that she made her dress from cotton material costing only $1.50 a yard.
Admission and “The Cause”
Admission will be free to those dressed in the period dress, because they have put money and effort into their clothing. Those not in period dress will be charged $5 each.
In the days of the Civil War, balls were held to raise gold, silver, etc., for the Civil War effort. A separate donation called, “Donation for the Cause” will be taken at the 2011 ball, and the proceeds will be given to an organization to send care packages to our troops in Iraq and Afghanistan.
All (period dressed or not) are invited to dance to the period music of “Salt Creek Band,” and organizers will have a caller to guide everyone through the Civil War era dances.
Visiting with old friends and new acquaintances, listening to music, watching a rainbow of flowing dresses moving about, and eating especially prepared period food – sounds like a great time.
This will be an interesting and fun event. It will be a first, but hopefully just the beginning of a historical tradition, thanks to a young woman’s 30-year-old dream.
The Next Day
A Civil War Memorial Service will be held at the Old State Burial Ground at 11 a.m. next Saturday.
As history sadly taught us, it was just two months later, in April 1861, that the first shot was fired in the Civil War. So many lives were lost in battles between neighbors, friends and even families, something unprecedented in wars in which the United States was involved. Thus, it is appropriate that we pay homage to those Civil War veterans, the Union and the Confederate soldiers.
And That Afternoon…
…is the traditional observance of Lincoln’s Birthday, set for 2 p.m. at the Vandalia Statehouse. Dan Guillory of the Looking for Lincoln Heritage Coalition will be speaker. 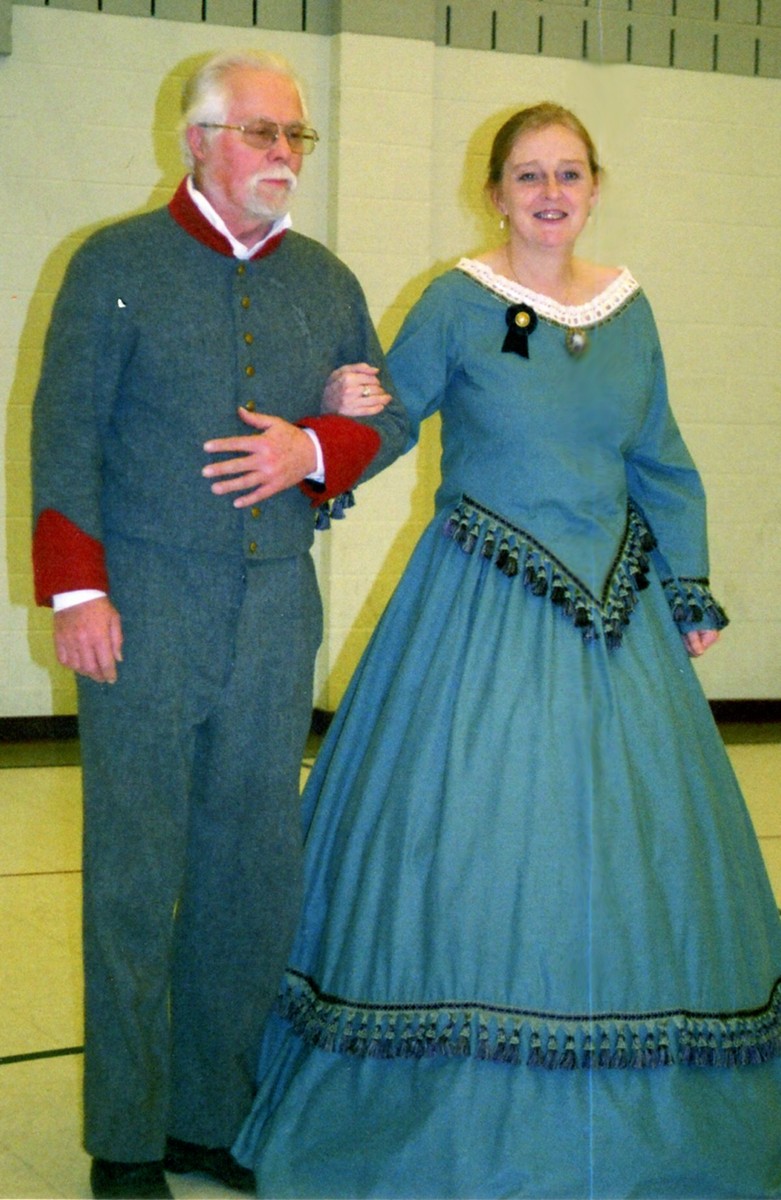 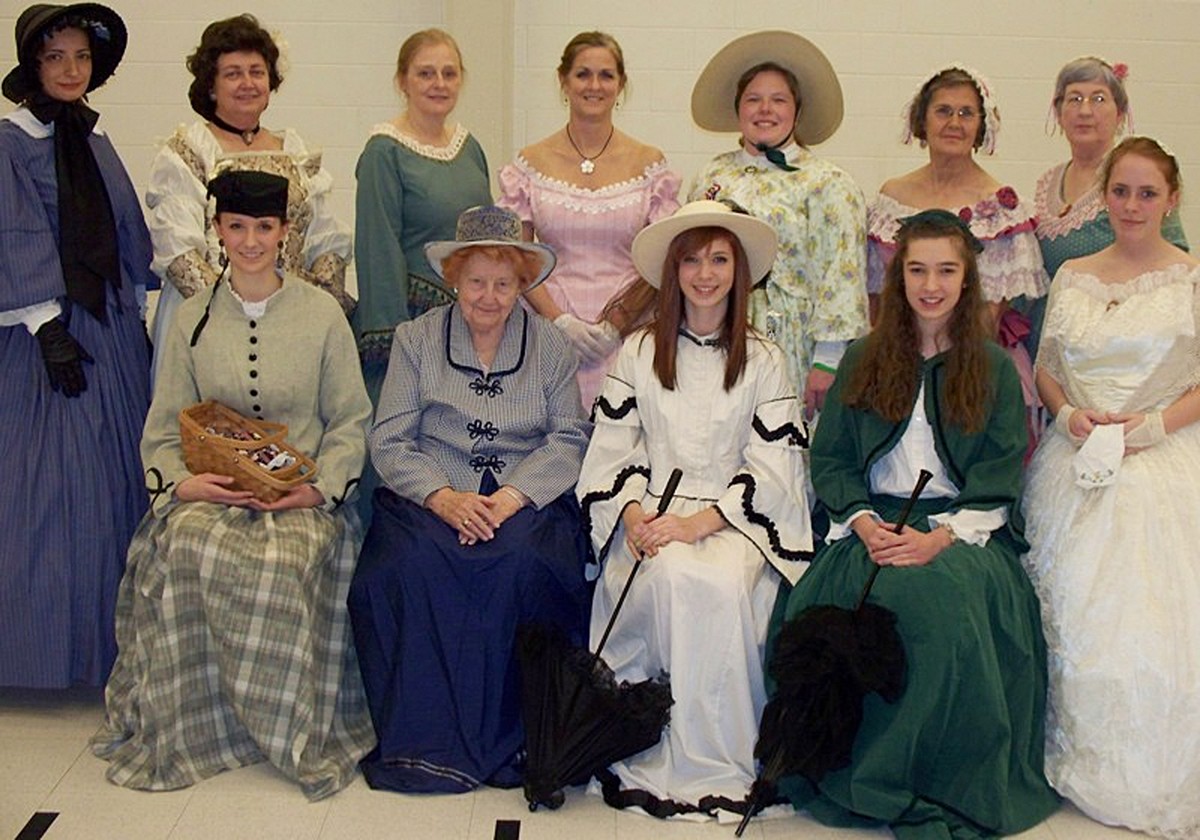 The area women who participated in the fashion show held recently to raise funds for Vandalia’s inaugural Civil War Victory Ball are shown above. In front, from left to right, are Amanda Barr of Altamont, BillyAnna Forbis of Vandalia, Emily Suslee of Nokomis, Heidi Goldsmith of Vandalia and Christina Pennington of Vandalia. In back are Viktoria Halmagyi of Vandalia, Marilyn Cole of Vandalia, Connie Bolyard of Vandalia, Laura Dossett of Vandalia, Kati Long of Sparta, Norma Englejohn of St. Elmo and Sharon Jorandby of Brownstown. This photo was provided by the St. Elmo Banner. 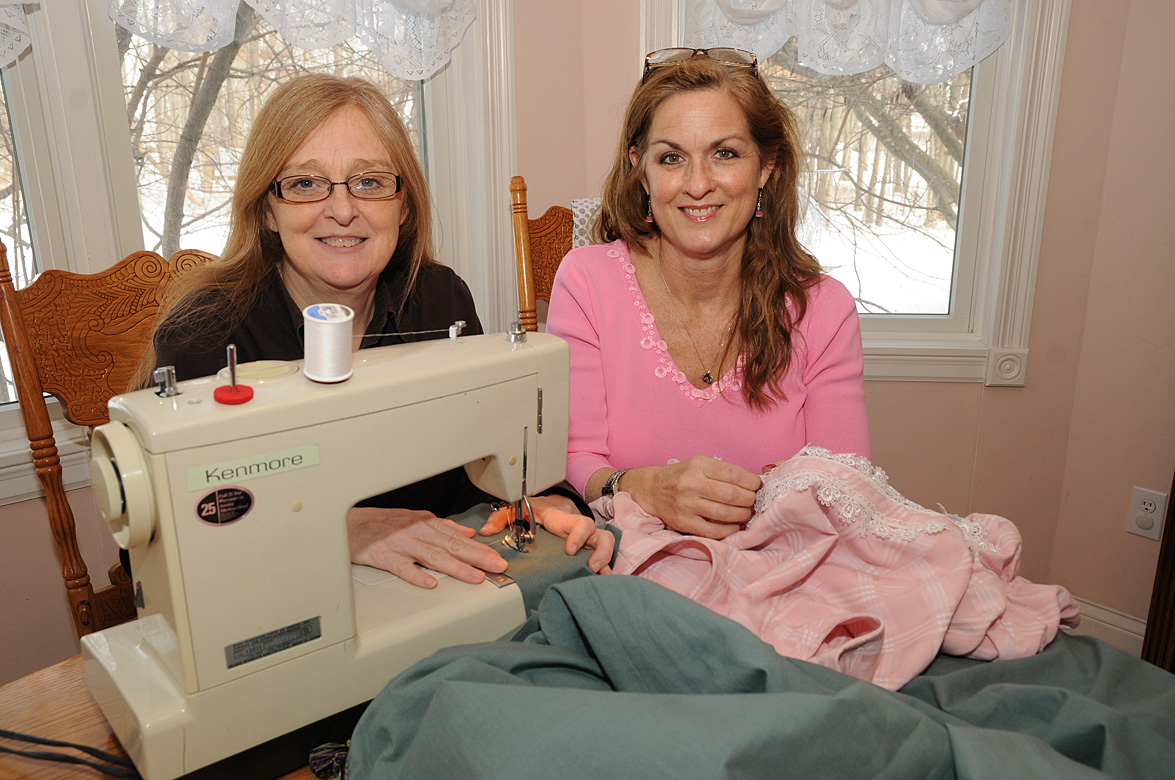 Connie Bolyard, left, and Laura Dossett have been sewing their own dresses for the Lincoln Victory Ball on Friday, Feb. 11. The event, which is part of the “Lincoln Remembered” weekend in Vandalia, celebrates the 150th anniversary of the start of Abraham Lincoln’s term as president. The ball will be held from 7-11 p.m. at the Vandalia Moose Lodge. Participants can buy, rent or make their own dresses or suits that were typical of the 1861 era. Being dressed in period garb isn’t a requirement to attend the event, but it will get you in without paying the $5 admission fee. “It will be all kinds of fun,” Dossett said. “We’ll have a caller for the dances, so people don’t have to know the dances to participate.” For more information, call Bolyard at 283-4206 or Dossett at 267-9785.