The Vandalia High School boys basketball team had a tough week with an overtime loss to Greenville on Friday and a 32-point defeat to Teutopolis on Tuesday.

Coach Kevin Jackson said a loss against Teutopolis was not necessarily unexpected – given that they are one of the top teams in the state – but that a strong effort against the Wooden Shoes could have provided a lesson to the team.

Sloppy play, however, has Jackson planning to make adjustments to his starting five.

The Vandals did hold a brief 7-6 lead against Teutopolis in the first quarter, but over the next 5:30, the Wooden Shoes extended their lead to 18-9.

Vandalia had a moment of excitement in the second period, however.

With six minutes remaining in the quarter, senior Marty Johnson connected on a 3-pointer, scoring his 1,000th career point.

He ended the game with a team-high 20 points.

Sophomore Leyton Godoyo scored four points in the first 1:30 of the second half, but the Wooden Shoes answered each of those scores and led 49-26 before the Vandals made another basket.

Johnson made two 3-pointers in the final 2:15 of the game.

In total, the Vandals committed 23 turnovers, some of which were forced by a pesky T-Town defense, but some of which came on unforced errors.

Greenville 77 (OT)
Vandalia 68
Johnson made a 3-pointer with 5.2 seconds left to tie Greenville at 65 on Friday, but the Comets continued riding the momentum it had gained in the fourth quarter to defeat the Vandals, 77-68, in overtime.

The Comets trailed by as much as eight during the fourth quarter but scored a flurry of baskets – totaling nine points in 52 seconds – to take a 56-55 lead with 1:47 left in the game.

That lead would grow to as much as five before Berning hit a 3-pointer with 29.2 seconds remaining, but Greenville pushed its lead back to three by making a free throw three seconds later.

“We got our chance to go to overtime with a big shot and didn’t take the momentum forward,” Jackson said.
Within 29 seconds of overtime, Greenville already held a four-point lead, and the Vandals would not get any closer than three points.

The Comets were 6-of-7 from the free-throw line and 4-of-5 from the field during the extra period, while the Vandals struggled to get five total points.

Neither team held much of a lead during regulation. In the first half, the Vandals held a five-point advantage with 6:12 left in the second period, but the Comets were leading just 1:21 later after making two straight 3-pointers.

The teams would trade baskets the rest of half.

After a layup by Bell, Godoyo made a steal and scored on a breakaway layup to give the Vandals a 34-31 halftime lead.

Vandalia could not get a run together in the third period, however, allowing too many open looks to Comets, who trailed by just four after the third quarter.

“(The defense) was not good,” Jackson said. “If we give up 60 points, we are probably going to get beat. That’s not us.”

The Vandals had defeated the Comets twice this season, once at Greenville, 52-39, and once during the Vandalia Holiday Tournament, 47-40. They had lost to Pana, 77-65, in overtime during the same tournament and are 1-4 in their last five overtime games. 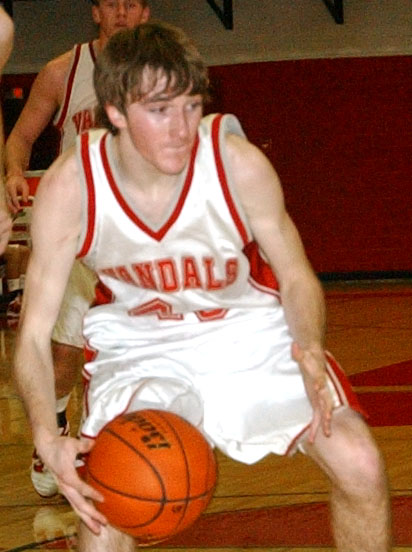 Vandalia junior Nate Henna moves the ball in the paint against Teutopolis during a 73-41 loss to the Shoes on Tuesday. Henna scored three points in the contest. 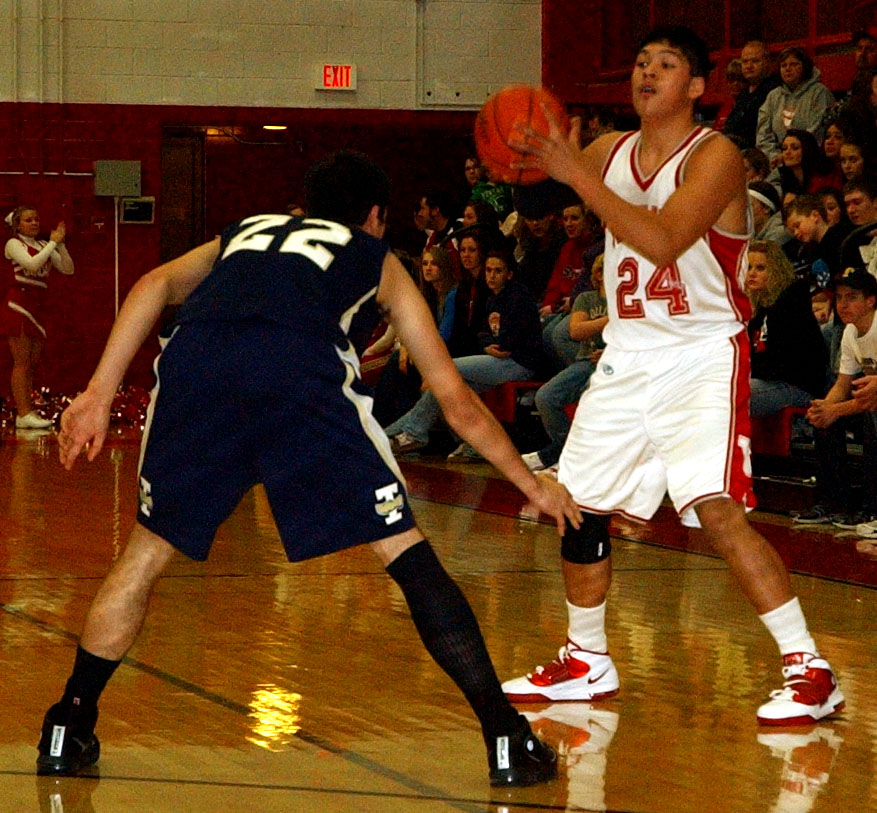 Sophomore Leyton Godoyo searches for an open teammate against T-Town.