SANDOVAL – The Lady Vandals started slow, but displayed more consistency in the second half of a 52-39 defeat of Brownstown to win the consolation championship at the Sandoval Tournament on Saturday.

The Lady Bombers led by as much as six before Vandalia coach Michelle McNary called timeout with 3:38 left in the first quarter to give her team a very strong message.

“I told them that we were not going to lose this game because of things we can control, like hustling and boxing out,” she said, “and if that was the case, I would not hesitate to take them out of the game.”

She did just that, cycling in most of her players during the first half.

One of them, freshman Megan Godoyo, proved helpful as the Vandals gained a 26-20 advantage at halftime.
Godoyo recorded four steals and scored four points in the final 5:03 of the first half, including a layup with just half a second left on the clock.

“Megan is doing a nice job,” McNary said. “She has given us great minutes off the bench, both defensively and offensively.

“It’s kind of a sign of what’s to come. When I can put her at the point and (put 3-point threats) Haley (Wollerman) and Amber (Bruno) on the wings, that will be nice.”

Wollerman had a game-high 23 points, including three 3-pointers, despite fighting foul trouble during the second half. Bruno added eight points in the win.

Junior Hannah Edwards, however, may have be the most important piece to the Lady Vandal victory.

The 6-foot center was not protecting the paint at the start of the game, prompting McNary to take her out.

“I took her out and chewed her butt a little bit, and asked if she was ready to go back in and that I needed her in there playing hard,” McNary said. “She stepped up and did a nice job.”

Edwards scored 11 of her 15 points in the second half, including a layup with 55 seconds left in the third quarter that sparked a 10-2 run that gave the Vandals an 11-point lead with four minutes left in the game.

“She was definitely a key to us winning this game,” McNary said.

A layup by Brownstown’s Abby Hill and a free throw by Kel-C Sefton moved the Lady Bombers back within six with 1:30 left in the game, though.

But the Lady Vandals would make 7-of-8 free throws in the final 39.6 seconds – the last coming with 1.8 seconds left in the game – while holding Brownstown scoreless to give the Lady Vandals their second straight win.

McNary hopes that momentum will give the team a boost as it moves on to a difficult stretch of the schedule in the coming weeks.

Second round
Vandalia 53
Cisne 22
The Lady Vandals easily handled a short-handed Cisne team, 53-22, on Thursday to advance to the consolation championship game.

McNary said she knew the team would likely win against the Lady Lions, who only have seven players, but also said it was imperative the Lady Vandals not overlook Cisne.

“I told them, we can’t take anyone for granted,” McNary said. “I think we kind of overlooked Christ Our Rock (Lutheran) the other night.”

Vandalia lost to Christ Our Rock Lutheran, 52-48, in a first-round game last Monday.

The onslaught continued into the second period, as Vandalia pushed its lead to as much as 27-5 before halftime.

Things slowed down in the second half, when the Lady Vandals began consistently substituting players, allowing McNary to get a look at all her bench players.

“That’s going to happen when you’re subbing people in and pull the press off,” she said.

“(Bench player) Morgan Whightsil has been working real hard and could very easily be in our starting lineup.”

The Lady Bombers kept the Lady Trojans scoreless through the first quarter, taking a 16-0 lead.

By halftime, that lead had been extended to, 22-4.

Sefton led the team with 12 points, and Myers pulled down nine rebounds.

First round
Woodlawn 47
Brownstown 37
The Lady Bombers held a halftime lead against Woodlawn last Thursday in its first round game, but the Lady Cardinals buckled down in the second half to defeat Brownstown, 47-37.

Strong efforts by the Lady Bombers in the last two minutes of both the first and second quarters gave them a 19-17 advantage at the half.

With 1:38 remaining in the first period, Woodlawn made a layup to go ahead 11-6, but 14 seconds later Myers made four free throws – two from being fouled on her shot and two from a technical foul against Woodlawn – and a layup with five seconds left in the quarter to give Brownstown a one-point lead.

The Lady Cardinals, however, again went ahead by five, 17-12, in the second period, but Brooke Maxey, Sefton, Abby Hill and Megan Maxey combined to score seven points in the final 1:58 of the first half to give the Lady Bombers another lead.

“I’m not sure why that happened,” said coach Katy Heckert. “I think Woodlawn was getting tired, and we capitalized on that by getting easier baskets, including free throws.”

It appeared that Brownstown was poised to do it again in the third quarter, after Megan Maxey and Abby Hill made back-to-back baskets  to give the Lady Bombers a 30-29 lead with 1:30 left in the third period, but they would only score one more basket over the next 9:24, allowing Woodlawn to take a 42-33 lead.

“Something happened during halftime, and we self-destructed and did not play near as well as we did in the first half,” Heckert said.

A 3-pointer by Myers cut the Lady Bombers’ deficit to six, and they tried to foul Woodlawn to catch up, but the Lady Cardinals were a perfect 4-for-4 on free throws down the stretch to preserve the lead. 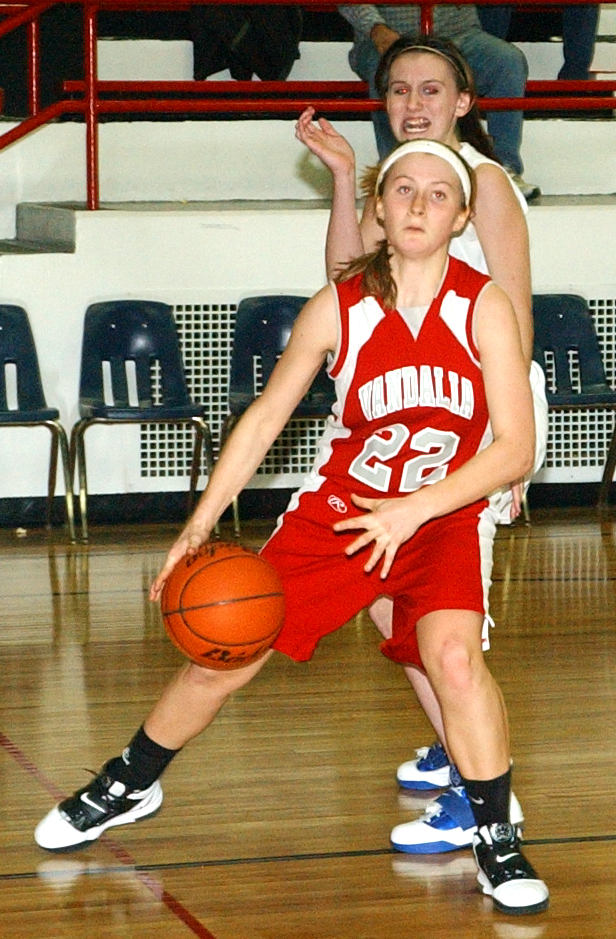 Sophomore Amber Bruno drives to the basket during the Sandoval Tournament. The Lady Vandals finished as consolation champions. 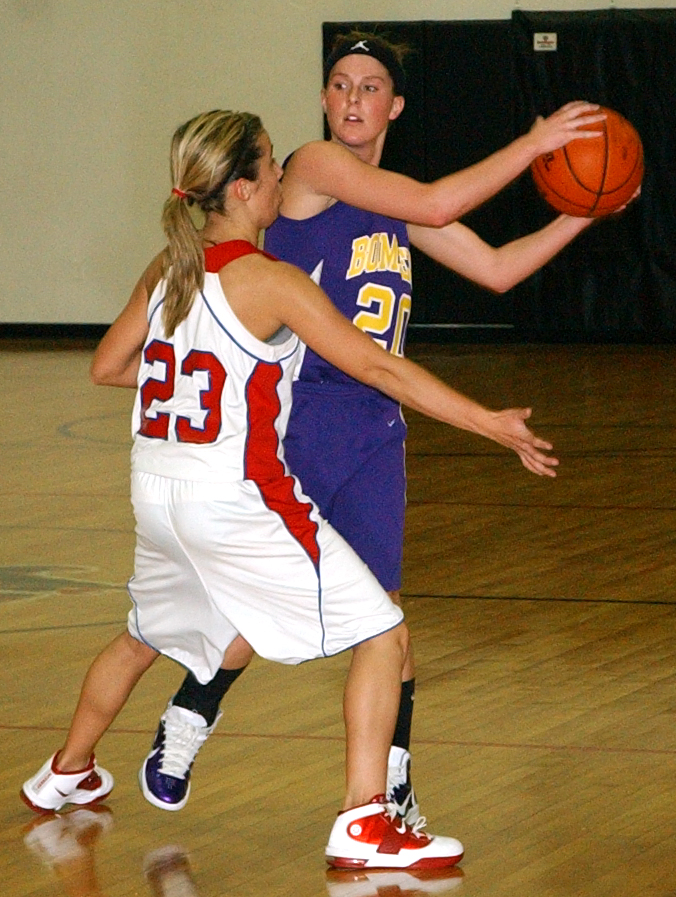 Senior Abby Hill looks to pass while being defended by a Woodlawn player during a 47-37 loss. 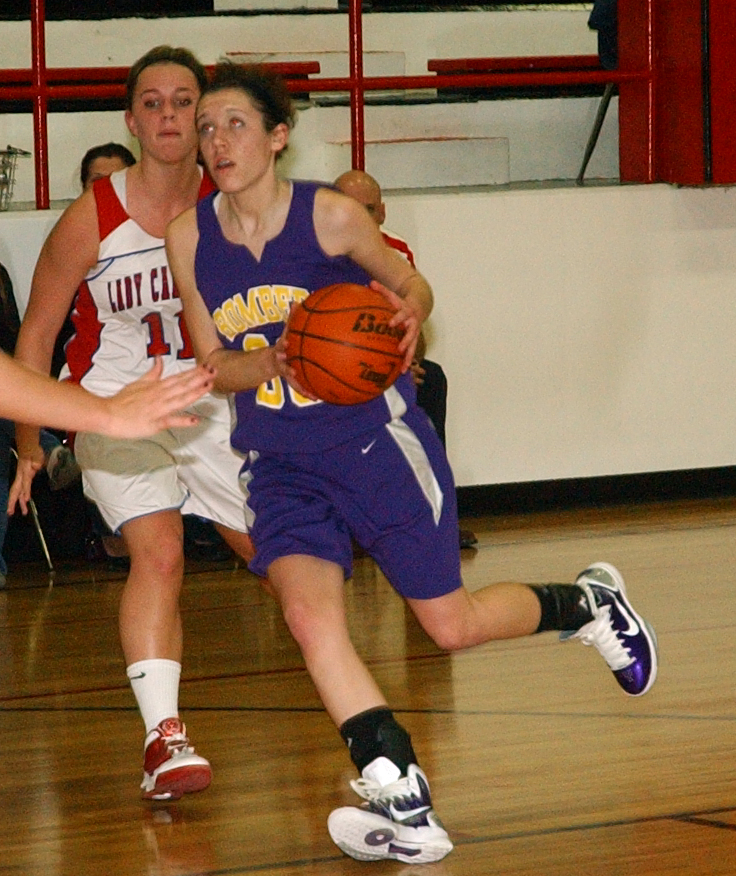