The Farina teen who was arrested last week for fatally shooting a Loogootee couple in their home now faces six felony charges.
Clifford W. Baker was arrested shortly after he allegedly shot Mike Mahon and Deb Tish early last Wednesday morning and charged with two counts of first-degree murder. Four additional counts were added on Monday, during Baker’s first appearance in court with his court-appointed attorney, Fayette County Public Defender Ed Potter.
Baker, 15, has also been charged with two counts of first-degree murder in which Fayette County State’s Attorney Stephen Friedel alleges that Baker shot Mahon and Tish, “knowing his acts created a strong probability of great bodily harm.”
Friedel also filed two counts of home invasion, a Class X felony, in which he alleges that Baker entered the Mahon and Tish residence without authority and discharged a rifle causing the deaths of Mahon and Tish.
Baker, who is being held at the Madison County Juvenile Detention Center in lieu of $2-million bond, also allegedly entered the home next to the Mahon and Tish residence, where he allegedly struck a female, while bearing a knife, causing a head injury.
According to Friedel, Baker then fled from that home, and the female contacted the Fayette County Sheriff’s Office, at 3:30 a.m.
After speaking to the injured female, a sheriff’s deputy, concerned about other residents in the area, checked the Mahon and Tish residence, and found them dead.
Baker was apprehended a short time later at his home and taken in to custody.
He made his first appearance in court on Thursday morning, at which time Judge William Becker set Baker’s bond at $2 million. Becker also appointed Potter to represent the teen.
Baker held his head down and cried throughout Thursday’s hearing, his voice barely audible when Becker spoke him. When the judge asked Baker whether he wished to make any comments, Baker said, “I have nothing to say.”
At that hearing, Friedel told the judge that Baker had “indicated” that he had been inside the two Loogootee residences, and that he had shot Mahon and Tish.
The prosecution is alleging that Baker shot Mahon four times with an “8mm high-powered rifle” that he found in the residence, and shot Tish three times with that rifle and once with a .22-caliber rifle. Baker reportedly used weapons that were in the residence.
Becker explained to Baker that the possible sentences for first-degree murder range from “20 years to potentially death, and anything in between.”
It was determined that as an individual under the age of 18, Baker would not be eligible for a death sentence. In those circumstances, the maximum sentence is natural life in prison.
At Monday’s hearing, Becker granted Potter’s request to hire private investigator Kevin McClain of Centralia, with a cap for McClain’s services set at $1,500.
He also granted Potter’s request for a fitness evaluation by Dr. Frederick Klug of Nashville, Ill., to determine whether Baker “was, at the time of the offense, either insane or suffered from diminished capacity.”
In his motion, Potter stated, “A bona fide doubt appears to exist as to (the) defendant’s fitness to plead or stand trial.”
A status hearing in the case has been set for 10:30 a.m. on Wednesday, Sept. 8. Whether a preliminary hearing can be held at that time, Potter said, will depend on whether a fitness evaluation can be completed by that date.
After Monday’s hearing, members of the Tish and Mahon families stood outside the Fayette County Jail, waiting for Baker to be taken to the car transporting him back to the Madison County Juvenile Detention Center. A short distance away stood Baker’s mother and several other supporters of the teen.
Several members of Mahon’s family held posters, and his daughter yelled at Baker, “Look at what you’ve done to our family. We couldn’t even get an open casket because of what you did.”
As the car transporting Baker pulled away, Mahon’s daughter held a photo of her father next to his backseat window. 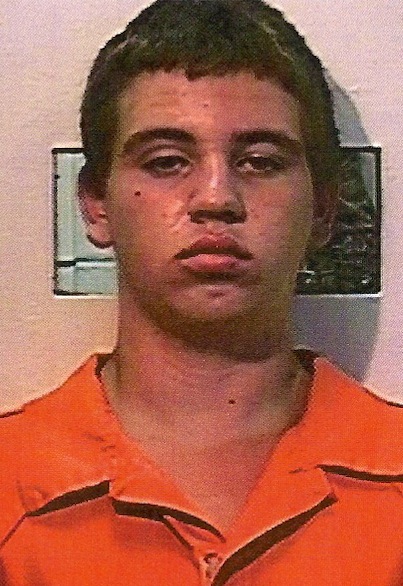