Haldon Warner became a member of the family at First National Bank of Vandalia in 1963, working in the bookkeeping department.

“Back then,” he said, “they wanted you to start by learning every department and work your way up.”

That seems like a good plan, because young Haldon Warner did, indeed, work his way up. He is now senior vice president and chief lending officer, positions from which he is retiring. He wears other hats, including serving as the compliance officer.

The sizeable amount of compliance regulations material found in file cabinets in his office is evident of Warner’s responsible attitude for every facet of his positions.

Warner, one of the youngest of several siblings, was reared on a farm north of Vandalia. His integrity, sincere and friendly manner, ready smile and soft-spoken voice, which tends to help people feel at ease, makes him a perfect representative of the bank’s family and friendly people image.

Just out of college 47 years ago, he was originally hired with the intent of becoming the bank’s auditor. However, the bank made a wise choice in placing Warner in positions in which he dealt with its customers, rather than keeping him in the position of auditor. The position of auditor, although a very essential part of the bank’s operations, would have kept his friendly and helpful personality behind the scenes.

His positions in bookkeeping and the drive-up facility were interrupted when Warner served with the Army for two years.

When he returned in 1967, he went to work in the loan department. “And I’ve been here ever since,” he said.

He voiced appreciation and respect for all of the bank presidents and vice presidents he worked under, especially John Palacek, who taught him so much about the lending business in the early days of Warner’s career.

“The bank’s primary lending area was installment loans,” Warner said. “We had clients all over Southern Illinois, and we traveled a lot.”

Acknowledging the many changes in banking over the years, Warner said, “There is so much more paperwork necessary now. There used to be one paper to sign – we trusted you, and you trusted us. Now there are more papers to sign and an (informational) form that has to be completed for every loan.”

The days of a handshake sealing an agreement with integrity and promise of word have changed as business, society and people’s values have changed.

Today’s technology and the arrival of computers on the scene is, of course, one of the major changes, eliminating the old method of recording and figuring everything manually.

At first, there was one main computer, “Now, we all have a computer on our desk,” he said. That expedites matters and service for both the bank and its customers.

“Now, I don’t know how we did everything without it (technology),” he said.

The Bank has grown and expanded extensively since the young man became a part of it,  and he has grown with it, in professional reputation, status, positions and responsibilities.

Warner considers himself very fortunate to have worked in a profession that he has enjoyed, for one employer for 47 years.

His appearance belies the years he has accumulated as a member of the First National Bank family.

His office is very neat, and reveals glimpses of Haldon. An attractive, small area of one wall of holds his personal Abraham Lincoln objects, which show his appreciation of and interest in history and greatness in leadership. Photos of his grandchildren near his desk reveal his love and dedication for his family. A replica of an old-fashioned radio sitting nearby indicates his appreciation for the past.

He and his wife Betty, nee Smail, have one daughter, Amy, and two sons, Jason and Eric. Their grandchildren include Jason’s children, Isobel, Hannah and Emma; Amy’s daughter, Carly; and Eric’s daughter, Zoey.

“Betty and I met here at the bank,” he said. “We both worked in the loan department.

“We started it all; we were the first (among the bank employees) to get married,” he said, smiling.

Warner will continue to be affiliated with First National Bank as a member of the board of directors. He holds all those he has worked with, both past and present, in high regard. He really regards them as “family”.

“Marilyn (Calvert) is the only one left who was here when I started,” he said. He named all of the bank presidents he has worked for, including the current president, Ernie Chappel, with a good word for all.

In retirement, he plans to enjoy his family and his only hobby, gardening. He is also adept at canning and preserving the garden harvest.

His last day at the First National Bank will be June 30, which is also his birthday, Like his original birthdate, it’s a birthday with a new beginning. 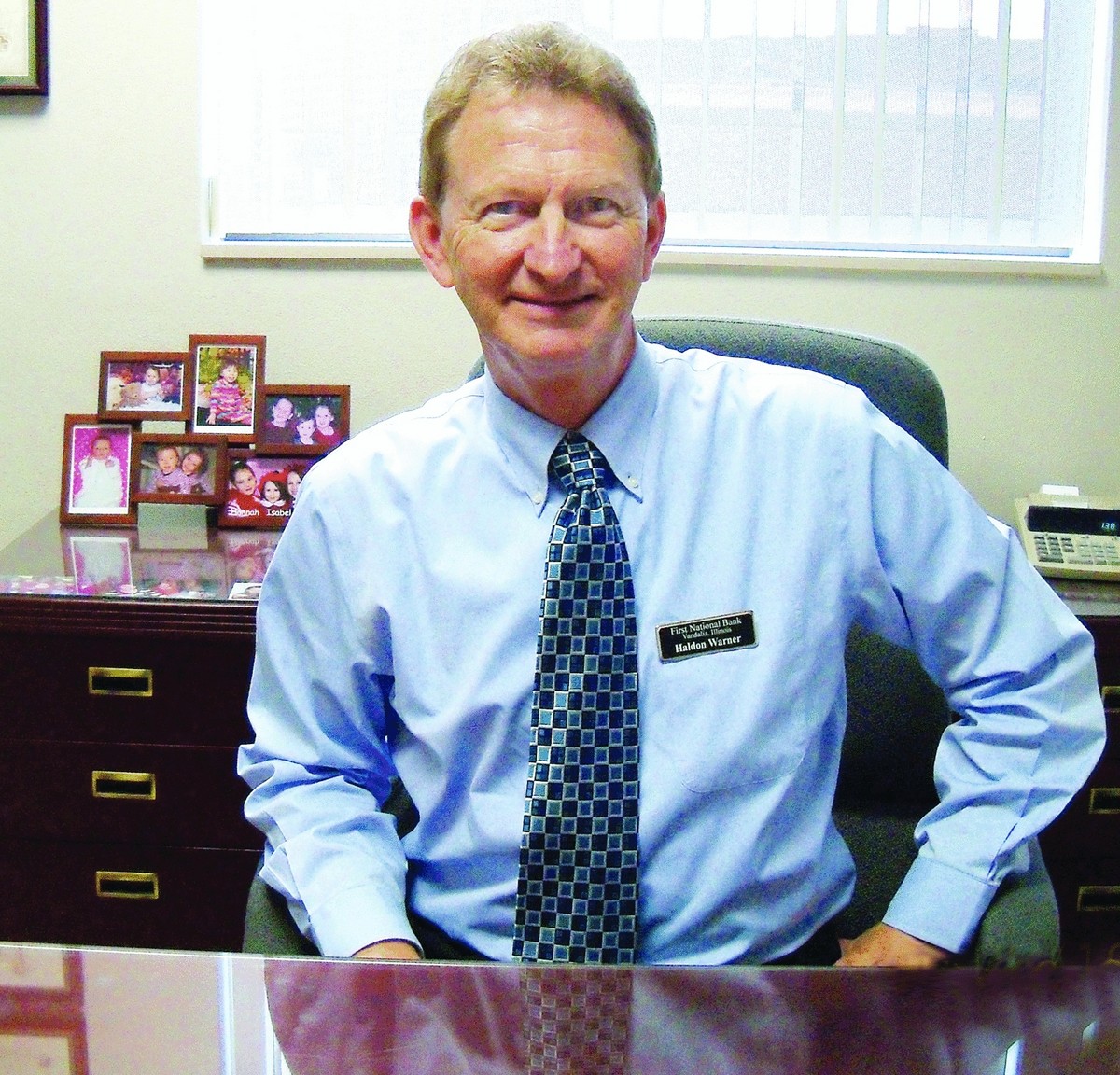