Five years ago, in an effort to help their grandson, Justin Dial, find a outlet for his computer repair expertise and sales during the summer months, Dewayne “Speed” and Marilyn Dial of St. Elmo had no idea that they would adopt, or be adopted into, a group of vendors that is rather like a large family.

That “family” gathers on weekends from the first weekend in April until the last weekend in October, weather permitting.

“Speed” and Marilyn and their family now provide home-cooked breakfasts and a varied lunch menu for the vendors, friends and visitors.

Located an the north side of U.S. Route 40 (the National Road), about one and one-half miles east of Altamont, the flea market offers a fun and interesting time of browsing, finding treasures and just visiting with the vendors … and enjoying pie or cobbler,  chili and  “Speed”-grilled sandwiches.

Marilyn said, “This is our fifth year here, and we sort of fell into it when Justin didn’t have a job that summer and he liked to fix computers. So we came here and rented a half-stall and set him up with his used computers.

“Then, about the middle of summer, he got a job, and grandpa (Dewayne) came on out and watched the stall and he brought his tools with him. By fall, the person who had been selling food from a trailer here left. Bob Gregory asked us if we would interested in cooking, because he knew that Dewayne had been a pork producer for 25 years and had cooked on the grill.

“Bob Gregory actually owns the flea market, which consists of a neat row of buildings similar to storage units. Gregory leases it to Ken Young from Altamont, but it is still called Gregory’s Flea Market.” she said.

“We started out with a tiny little booth and just had sandwiches that you microwave, candy bars, chips … that sort of thing,” she said.

“Then, each year we came back, we added more. Dewayne kept adding and adding to the menu, and we now have the ribeye, tenderloin and breaded tenderloin sandwiches.

“I make pies every week and on Saturday, we have a special, like ham and beans, sloppy joes  or chili. When I can, I make blackberry or peach cobbler. And we have expanded our building,” Marilyn said.

Now, it’s a family affair – son Doug and his wife Juanita, Justin and granddaughter Shana all help out, and all seem to enjoy the family venture.

The little restaurant now has more tables, and a snack bar and stools. It formerly had a NASCAR theme, but Doug redecorated with America’s hero, John Wayne, and a western theme.

Dewayne also still has his tools and related, assorted items for sale, just in front of the restaurant, although satisfied customers have suggested moving the tools out and putting in more tables.

Although there are numerous vendors from different places, there is a family-like closeness among them. An example is the concern by all for two of the vendors who were unable to open this year, due to their health and serious illnesses.

“A lot of our vendors are older people,” Marilyn said. “One of our friends had a stroke and is paralyzed, and we are all torn up about that.

“At the other end, Linda was unable to continue this year because of illness, and we all hate that. It really put a damper on all of us on the first day we opened,” she said.

It is a casual, friendly and laid-back atmosphere, with homey folks such as “Singin’ Phil,” who after retiring as a carpenter foreman, singing and playing with his own popular country bands and undergoing a six-bypass heart surgery, finds the easy pace of his stall and the people-filled atmosphere could be “just what the doctor ordered.” Then there is a tall, slender man with a long beard and a friendly little dog at his side, with a friendly word for you. A younger vendor comes from Toledo, with a variety of collectibles, jewelry and many other items, and seems to enjoy cutting the already reasonable price or making a gift to his customers. He considers the flea market a source of “good, clean, wholesome, fun, while maybe making a dollar or two.”

None of the vendors try to push their wares, but seem content to just be there.

Now retired, Dewayne worked in the oil fields for 30-plus years, for John Clough Trucking of Beecher City, then for Petco.

Marilyn worked as a secretary for more than 40 years for different employers. She retired from Marathon, at the plant in St. Elmo where she worked for 17 years. She is now working part-time for Westap, a research company, doing a survey on medical expenses.

“We have the food booth at the flea market, so we keep busy,” she said. “We enjoy this. We have the regular people who come that we get used to, and it’s like family.”

“When we first took this over, we told the grandchildren they could come and help and make a little spending money, and we also wanted to teach them about working hard and responsibility, but they want to come and help, anyway,” she said.

Doug works for Nova Solution in Effingham, and Justin is going to college, majoring in computer management.

Fifteen-year-old Shana is planning on going to college for fashion management. Another granddaughter, Nicole Dial, is working on her master’s degree in art history at the University of Missouri and working at the St. Louis Art Museum. She will be studying art and working at the art museum in Alaska this summer.

A Celebration of Family

They invite everyone to come to their celebration and eat a piece of cake….and they also invite you to stop by the flea market on the north side of the old National Road, and say hello to them and enjoy a unique, fun and relaxing stroll. 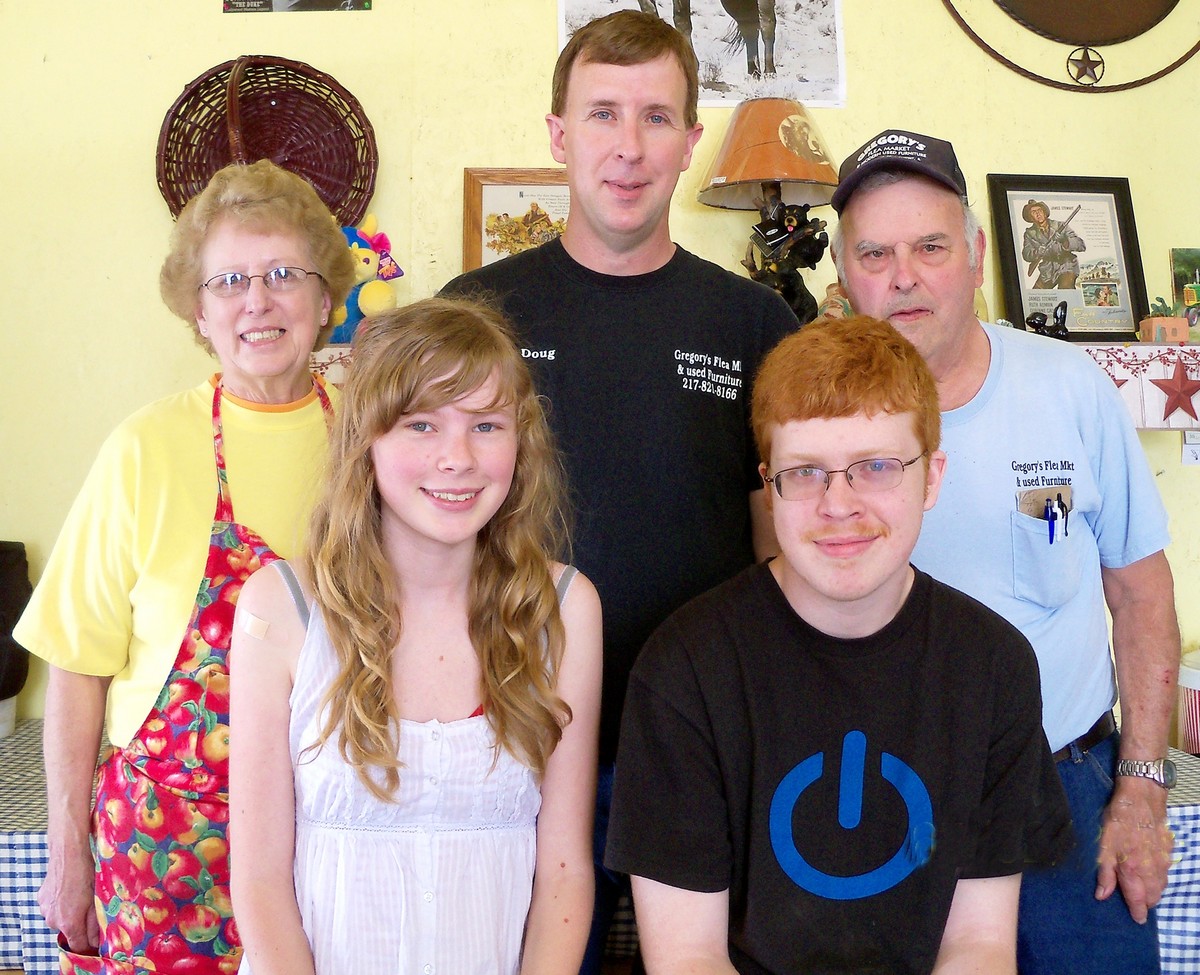 Dewayne ‘Speed’ and Marilyn Dial are shown with their son, Doug, and grandchildren, Justin and Shana.